From Turner to Tokyo

Can Golden Gloves Champ Missy Fitzwater Punch a Ticket to the 2020 Olympics? 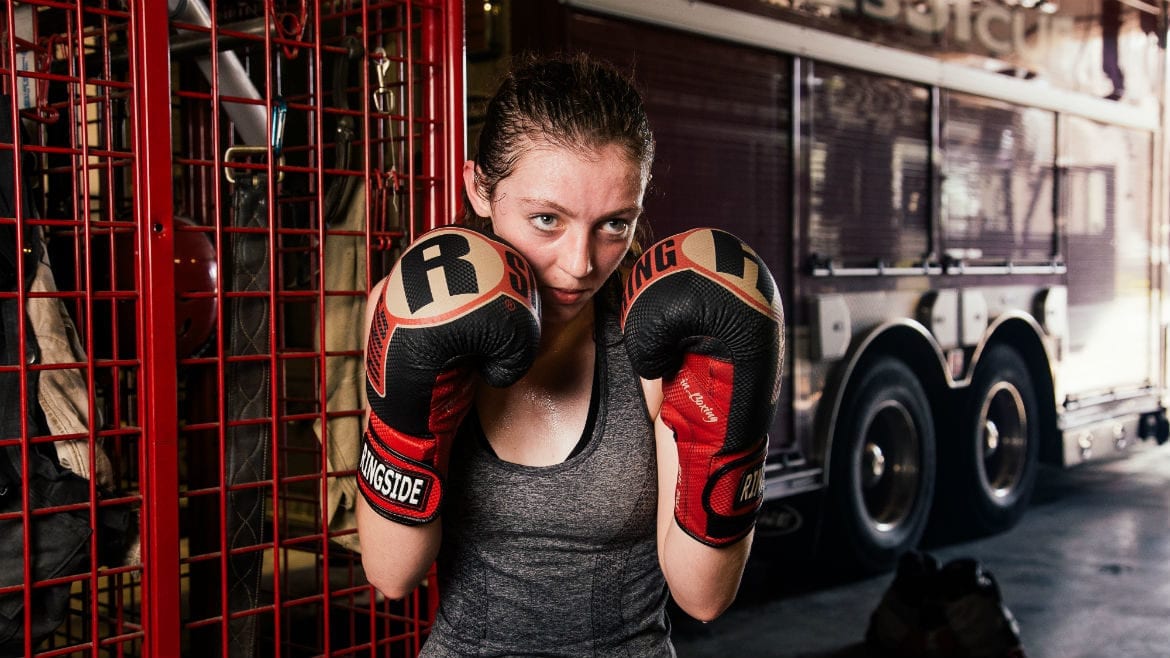 Missy Fitzwater has found herself in the boxing ring (Photo: Zach Bauman I The Pitch).
Share this story

This story was produced in partnership with The Pitch. Look for it in print right now.

In the selfie, she’s 17 years old, apple-cheeked, smiling. Her brown hair is pulled back, messy, slightly out of focus. Her green eyes are a bit puffy, and beneath the left is a small, dark smudge that seems to match the eyeliner she’s wearing.

It’s not makeup, though. It’s where a quick right hand touched her, a jab Fitzwater didn’t see coming.

“She’s proud of her black eyes and bloody noses,” Debbie Fitzwater says. She’s Missy’s mother — the mother of a boxer.

“Boxing was me coming into my own as a person,” Missy Fitzwater, now 18, says. “I find this really Zen place when I’m working out. I’m just at home. It’s exciting and addicting. I’ve never felt it anywhere else.” 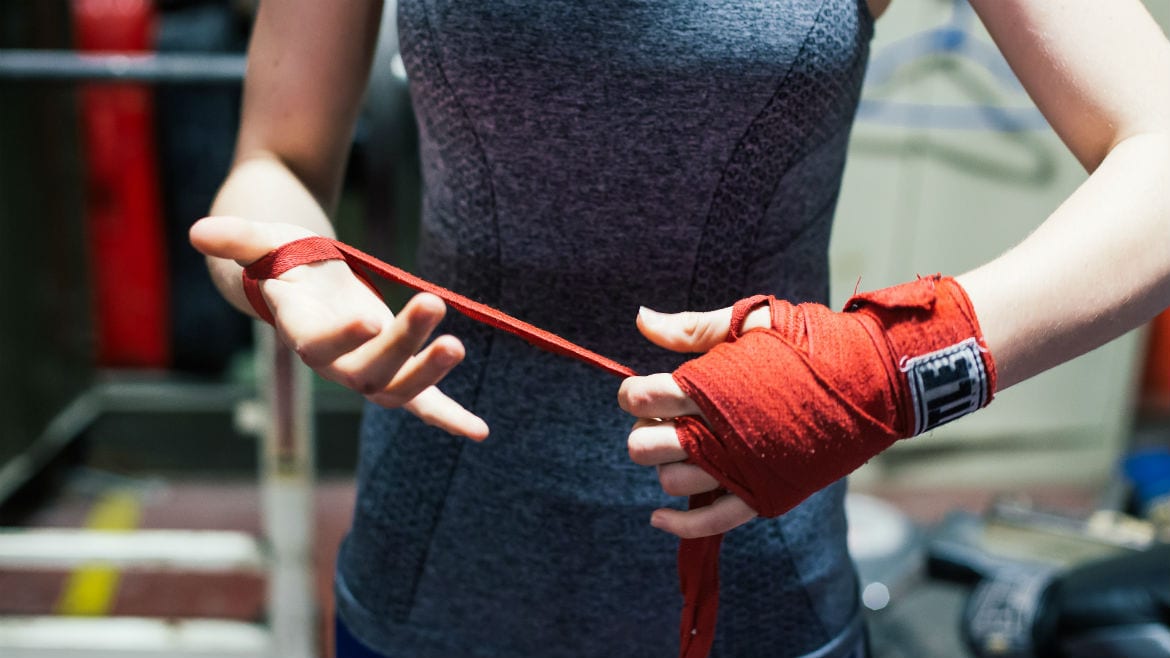 On a recent Thursday, the boxer is halfway through an hourlong session with trainer Craig Cummings. Her right hand flashes out and connects with a black heavy bag suspended from a chain and held in place by a screwdriver and some duct tape. A metal ladder that sits above the bag rattles with each of her punches. She’s training at the Kansas City Fire Department’s Station 17 between the washer and dryer and a pair of fire trucks.

“It’s like watching her become the person she was supposed to be,” Debbie Fitzwater says. She’s sitting on a weight bench, recording Missy’s training session on a white iPhone. Her daughter will watch and rewatch the video later, examining it to see what she’s doing right and wrong. “She’s a totally different girl.”

Women’s boxing was supposed to be mainstream in America by now, with teenagers like Missy Fitzwater training in gyms across the country. In 1993, Christy Martin was fighting on Mike Tyson’s undercard, and USA Boxing lifted its ban on amateur female boxing. A little more than a decade later, Hilary Swank earned an Oscar for her performance in Million Dollar Baby. But the large purses that are standard for pay-per-view men’s boxing matches never materialized for women, and talented female boxers were siphoned away by mixed martial arts.

Fitzwater doesn’t see her sport in those terms. The 2012 Olympics, which featured women fighting in three weight classes, came and went two years before boxing entered Fitzwater’s life. The woman she idolizes today — Claressa Shields (the first woman to win Olympic boxing gold) — was just another teenager in Flint, Michigan, four years ago. 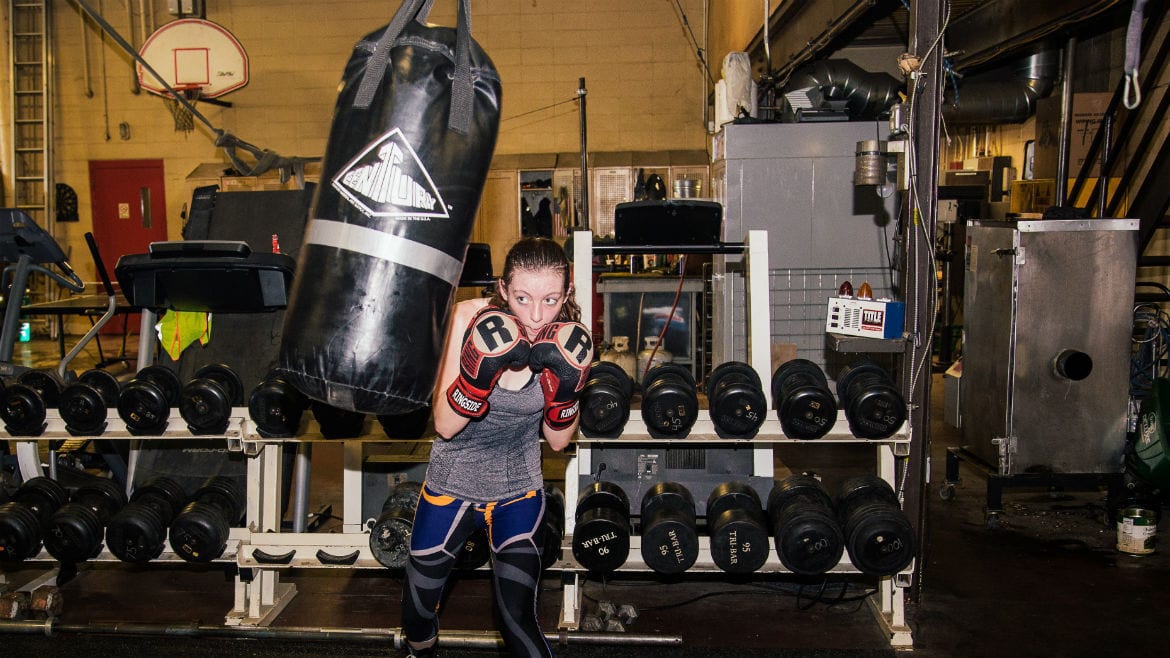 It started with a heavy bag in the basement. The bag was a 2014 Christmas present for Missy’s father, Ed, a retired firefighter. He thought he’d use it to lose the pounds he’d put on since leaving his job. Instead, Missy would sneak down and pound out her anxiety. She punched to feel confident. She punched to feel secure.

“I wasn’t sure that I was allowed to hit it, but I’d sneak away to do it,” Fitzwater says. “I was just flailing away. I knew it felt good, but I had no technique.”

She had never played a sport. A homeschooled teen, she found it uncomfortable speaking up to order a meal in a restaurant. But Debbie saw that the heavy bag lightened her daughter, gave her a release.

“I liked things in their place,” Fitzwater says. “I just never had the right thing that let me put everything into its place.”

Now Fitzwater needed a place to put herself, a place to box. So her father called Cummings, a 48-year-old former professional boxer and fellow Kansas City firefighter. When another firefighter calls, you answer — Cummings agreed to work with Missy.

In 61 fights, Cummings had laced up his gloves from New York City’s Madison Square Garden to the Ameristar Casino in Kansas City. Fitzwater expected a gruff veteran. But he put his new pupil at ease with an easy laugh, and the two found themselves an ideal match.

“She was just a kid that wanted to box,” Cummings says. “I just had to see through the glasses and the shyness. She was built for boxing, just like me. I saw the perfect clay model of myself.” 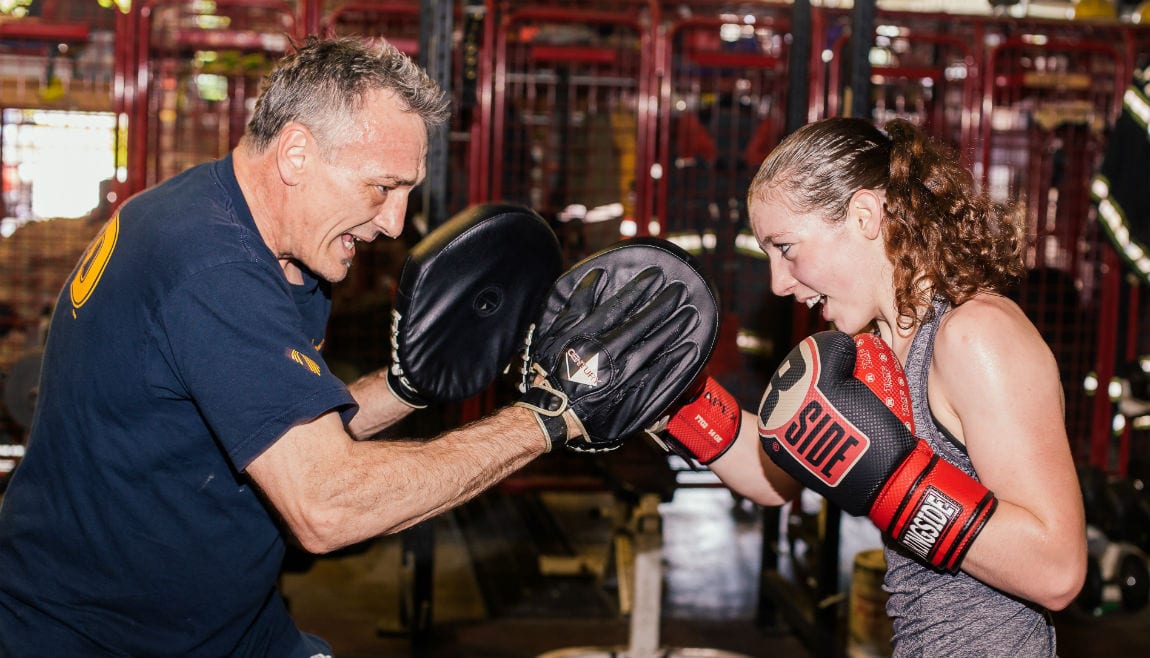 Just two months into training, Fitzwater stepped into the ring for her first fight. Her opponent had 20 pounds on her, and the bout lasted a little more than a minute. Fitzwater lost by technical knockout.

“That one was on me,” Cummings says. “I knew that we needed to get out of our gym then.”

Her quiet fire caught the eye of Cam Awesome, a member of the USA Boxing team who trains at Turner.

That zone is where she has been sculpting her identity over the past year. By focusing on what her body can do, she’s less focused on what others think of her. Timidity has become tenacity. Fear has become calm confidence.

“I saw a big difference in my body when I started working out and that’s only important because it was important for my sport,” Fitzwater says. “But I don’t care about my looks. You are who you are.”

Her next challenge: finding women to fight.

A half-dozen women train on and off at Turner, and Fitzwater has traveled up to six hours for a chance to get in the ring. Last winter, a Topeka sparring session left her with the black eye she showed off on Instagram.

Missy doesn’t have a driver’s license, so it’s Debbie who does the driving six days a week from their home in Wellington, Missouri. It’s about an hour each way — plenty of time to think about her daughter punching and being punched.

Missy takes a Sunday off every few weeks, but it’s not down time. There are chores: feeding the cows and the horses, the chickens and the dogs. After a few hours she gets antsy and starts shadow boxing.

“I occasionally watch a fight and pick a boxer that I would like to fight,” she says. “Then I’ll shadow box while I watch,” Fitzwater says. “In my head, I always win.”

In the ring it would take a little longer to hear her name called. She lost a pair of fights by decision in February. Like a new driver, she kept overcorrecting. In one fight, she focused on defense. The next was all about punching.

“I don’t get mad when I get hit,” Fitzwater says. “I get mad at myself for getting hit. I should have had my hands up. We’re not playing badminton.”

Fitzwater found her balance in her fourth amateur fight, in Branson. The other boxer was shorter and worked at crowding her. But Fitzwater kept her distance and answered with jabs, landing more punches and scoring more points to earn the decision.

“It felt perfect,” she says.

Cummings believes that bigger fights are down the road. “She’s already motivated,” he says. “She doesn’t need to scream and yell to get motivated.”

As this Thursday training session goes on, Cummings circles around Fitzwater. He ducks his head as Fitzwater connects a stiff left to his forehead. Her mother lets out an unconscious oof.

“This is the best $3 I’ve ever spent,” Cummings says, holding out a black mouthguard.

Her red-and-black gloves pop against the black mitts on Cummings’ hands. The two don’t talk. They dance. A silver timer buzzes after two minutes. They slap right gloves, a fierce version of a high-five.

Near the end of the session, Cummings works to eliminate a hitch in Fitzwater’s step. She’s rotating her ankle — “squishing bugs,” he calls it. It’s a quirk that developed after she stepped on a ref’s foot during a February fight. He has her move in circles, slowly stalking the black heavy bag. 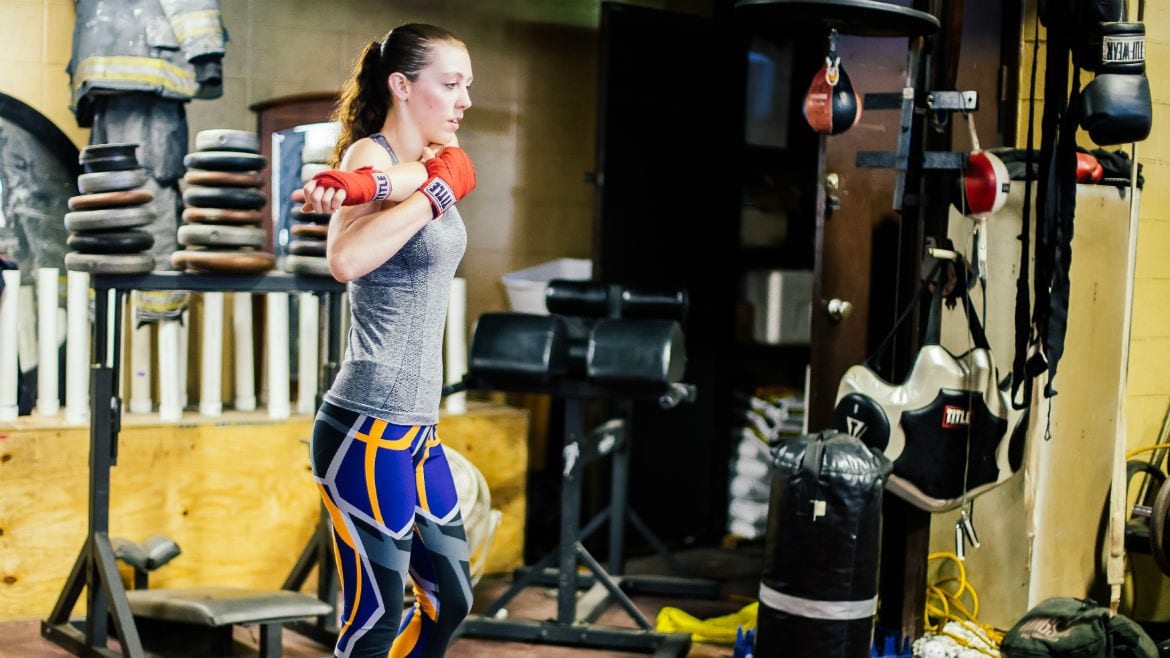 Cummings is hoping to open his gym in the future, but for now he’s focused on getting a boxing club up and running at the Garrison Community Center, which closed earlier this year after city officials discovered a potential lead hazard during renovations.

“There are kids in that area that need something, and I’m exactly what they need,” he says. “If I can help another one like her [Missy], it will all be worthwhile.”

In April, Fitzwater laced up her gloves for a tournament at Memorial Hall. In front of friends and family, she was named the Turner Boxing Academy 2016 Golden Gloves Champion.

“She’s young and she’s on the right track to do what she wishes in life,” Awesome says. “She’s mature for her age and is the perfect age to pursue the 2020 Olympics.”

Fitzwater is slated to graduate from high school late this summer. She says she may want to be a paramedic, like her uncle and her grandfather. But she’s also recently become interested in writing.

First, though, more fighting, more travel, bigger tournaments. She has to fight women with more experience. And she has to win. She thinks about Tokyo, four years from now. But she’s focused on tomorrow, on getting better every day.

KCPT screens T-Rex: Her Fight for Gold at 11 a.m. Saturday, June 11, at the Plaza Branch of the Kansas City Public Library (4801 Main). The documentary follows boxer Claressa Shields’ pursuit of Olympic gold and will be followed by a moderated discussion with middleweight Tony Chiaverini and Missy Fitzwater. The Kansas City, Missouri, Parks and Recreation Department, with KC Golden Gloves, offer a special boxing demonstration. The event is free, but RSVPs are required.