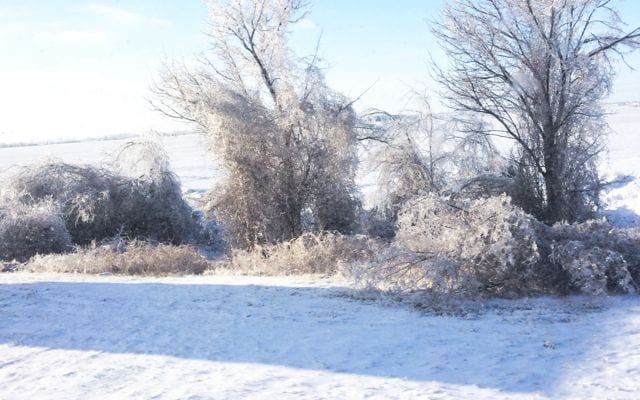 Each year, Startup Buses around the country head towards Austin for the South By Southwest Interactive Festival. Startup Bus is a competition where businesspeople, designers and coders — buspreneurs — create a startup, from idea to pitch, while on a three-day bus trip to the finals in San Antonio. Caitlin Cress, reporter for The Hale Center for Journalism, is riding along in the Midwest Startup Bus, which left KC Sunday morning. For information about the competition, read an explainer here.

While day one on Startup Bus Midwest was full of surprises and unexpected challenges, it was nothing compared to day two. Monday on the bus lasted 17 hours: buspreneurs boarded in Nashville, Tenn., around 7:30 a.m. and arrived in Little Rock, Ark., at 2:30 a.m. Tuesday. In this time, the bus only traveled 350 miles.

Inch-thick ice on I-40 West outside of Memphis, Tenn., caused a miles-long traffic jam. After stopping for gas outside of Memphis around 3:45 p.m., the Midwest bus took around eight hours to travel 40 or so miles. The bumper-to-bumper traffic and iced-over highway were both contributing factors to this slow-motion travel.

“It was pretty amazing how much ice was on the roads,” buspreneur Shane Reustle said. “At least an inch thick. We kept losing traction while going up little hills, but all while moving along.”

“There were moments when it was kind of scary,” she said.

The day started with a visit to the Nashville Entrepreneur Center, where buspreneurs pitched to experts that specialize in investable pitches. A question that nearly every team received after its pitch: “How do you make money?” This question showed the teams that they should work on either refining their business plan or making sure it is better described in the pitch.

This lesson in pitching was applied later in the day when buspreneurs were required to pitch live on StartupBus TV. Midwest Bus co-conductor Cole Worley said he was really nervous before the live stream started, but he is happy with how it went.

“The conversational nature of the show format allowed each team to shine,” he said. “I was super impressed with the way everyone handled themselves on camera.”

It was shortly after this television time that the traffic issues started. In addition to that unexpected hardship, team WasteNot decided to pivot. Team member Melissa Roberts said this is a euphemism that means the team scrapped its first idea and will start over with a new one.

After assessing the cost structure and revenue model of WasteNot, the team decided their original plan wasn’t going to work: as a sustainable business or as a winning Startup Bus idea.

“The user base was small, and the amount of money to be made was even smaller,” Worley said. He also pointed out that differing farmer’s markets regulations between states would prove difficult to manage.

Worley and his co-conductor Ricky Robinett both said this pivot is pretty typical of a startup event. Worley said reaching a roadblock and figuring out how to overcome it is key to success.

The new idea for WasteNot, now known as CropRate Wellness, is based on the market need for preventative healthcare in the corporate world.

“(This market is) catching fire because (corporations) don’t want to spend a lot of money on healthcare costs,” team member Holbrook said.

“Most corporate wellness programs treat a symptom, not the problem, and it’s time to cut the crop,” Roberts said when practicing the team’s new pitch for the bus.

Robinett applauded the pivot, but said he hoped the team’s new idea wouldn’t jackknife like all the wrecked semis we had passed on the highway.

Holbrook the traffic delay was a sort of blessing in disguise for her team.

“The fates have shined upon us, and they’re giving us time to brainstorm without having to do all kinds of crazy stuff,” she said. “We’re getting a big, long break to kind of catch back up.”

Holbrook said they would be close to catching up to the other teams by Tuesday morning. Their new and old ideas are similar enough that logos and web pages can be repurposed with small changes, which will save considerable time.

Soon after the big pivot, it was made clear to the bus that the original Monday destination of Fort Smith, Ark., would no longer be the final destination. The buspreneurs were challenged to find hotel rooms for both the Midwest bus and the New York bus — which was also stuck on I-40 — using their Internet and Twitter prowess.

Buspreneur Blair Vance came through, locating enough rooms in a Crowne Plaza in Little Rock. The buspreneurs used a map developed by Midwest buspreneur Carl Shotwell to track the location of the Midwest and New York buses. The map uses the location tags of tweets to geo-locate each bus. This map helped buspreneurs determine how far hotels were from current bus locations.

As the hours on the bus dragged on, the buspreneurs became more and more loopy. There were sing-alongs to the Oscar-winning song “Let It Go,” and the inaugural Startup Games were held in the aisle. Competitive games included push ups, thumb wars and staring contests.

Some buspreneurs worked the entire way to Little Rock, but many took advantage of the sponsor-provided earplugs, eye masks and neck pillows to take a nap. After arriving in Little Rock at 2:30 a.m., buspreneurs had around eight hours to sleep and prepare for Tuesday — their final day on the bus.