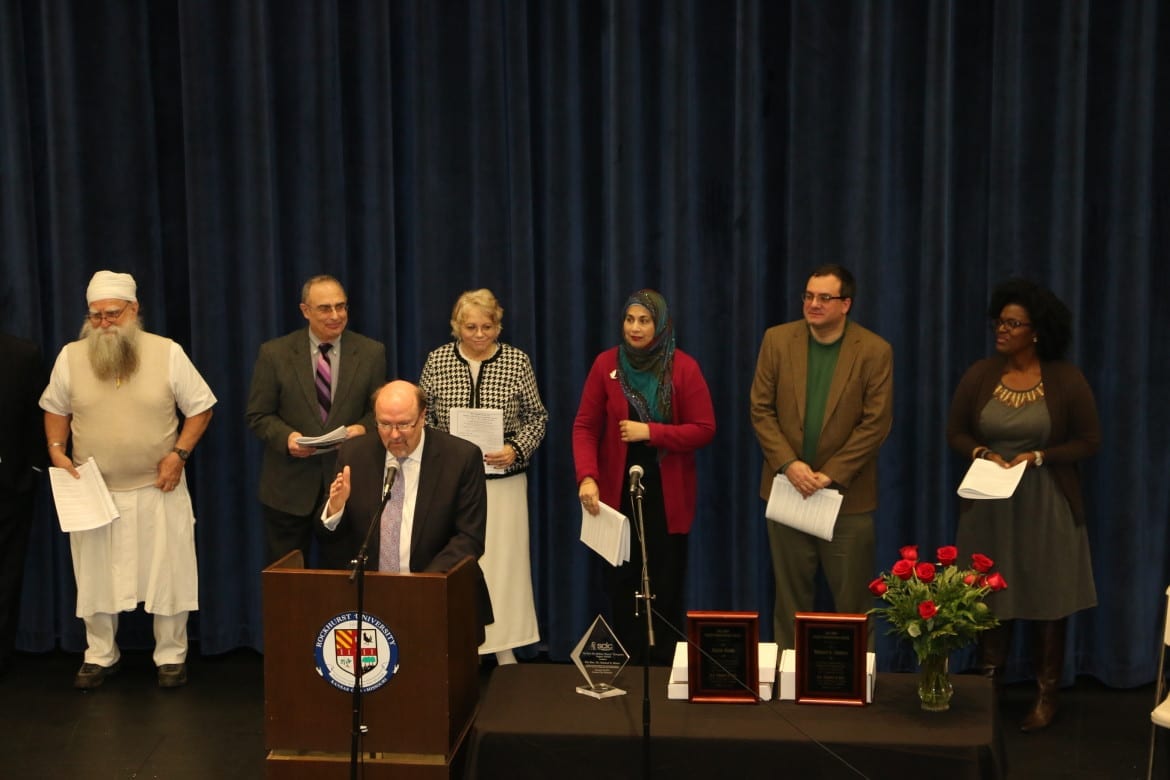 Rev. Dr. Robert Lee Hill at the microphone introduces leaders from various religions in the Kansas City community, including Jewish, Muslim, Baha'I and the Sikh faiths. Everyone came together at Rockhurst University for an interfaith ceremony to honor Martin Luther King's life and work. (Photo: Daniel Boothe | Flatland)
Share this story

Editor’s Note: This article was originally published on Jan. 12, and has been updated with video from the event. Click on the play button above to hear part of the keynote speech from the Rev. Dr. Gary V. Simpson, senior pastor of the Concord Baptist Church of Christ in Brooklyn, New York.

Who knew that the actions of a petite woman in America’s Deep South would spark a worldwide movement?

Speakers at a Sunday interfaith service at Rockhurst University in Kansas City, part of the metropolitan area’s celebration leading up up to Martin Luther King Jr. Day on Jan. 18, marveled at the continuing reverberations of Rosa Parks’ refusal to give up her seat to a white passenger in Montgomery, Alabama, more than half a century ago.

“When the Montgomery Bus Boycott began, little did we know that we were starting a movement that would rise to international proportions,” said the Rev. Tina Harris, pastor of Grand Avenue Temple United Methodist Church in Kansas City. “(It is) a movement that rings in the ears of people of every nation,” she said.

Added Mahnaz Shabbir of the Muslim based Crescent Peace Society: “While the world is geographically one, we are faced with the challenge of making it spiritually one. We are all links in the great chain of humanity.”

Sunday’s service was part of the series of events the Southern Christian Leadership Conference of Greater Kansas City is holding in conjunction with Martin Luther King Jr. Day.

Sunday’s keynote speaker was the Rev. Dr. Gary V. Simpson, senior pastor of the Concord Baptist Church of Christ in Brooklyn, New York. He titled his talk “The Risky Business of Resisting Death.”

“This is a very important time in the history of our country in the sense of race relations,” Simpson said in an interview, “and the legacy of Martin Luther King Jr. now extends to the next generation of people.”

Simpson said that while the black community has had “a few victories, the war is far from over, and far from being won.” King’s vision of a culturally equal America has yet to be realized, he said.

The crowd, which gave Simpson a long standing ovation when he concluded, then linked arms and sang “We Shall Overcome” to end the ceremony.

During the service, the Rev. Dr. Vernon Percy Howard, the president of the Southern Christian Leadership Conference of Greater Kansas City, awarded the Rev. Sam Mann with the inaugural Dr. Nelson “Fuzzy’ Thompson Leadership Award for Mann’s devotion to the advancement of the African-American community.

Howard drew chuckles from the crown by introducing Mann, who is white, as “the blackest man I know.”

Thanking his wife and children, Mann choked up when he addressed the largely African-American audience.

“I would like to thank the African-American community of Kansas City,” Mann said. “For 45 years, you have loved me, you have housed me, and you have fed me.” 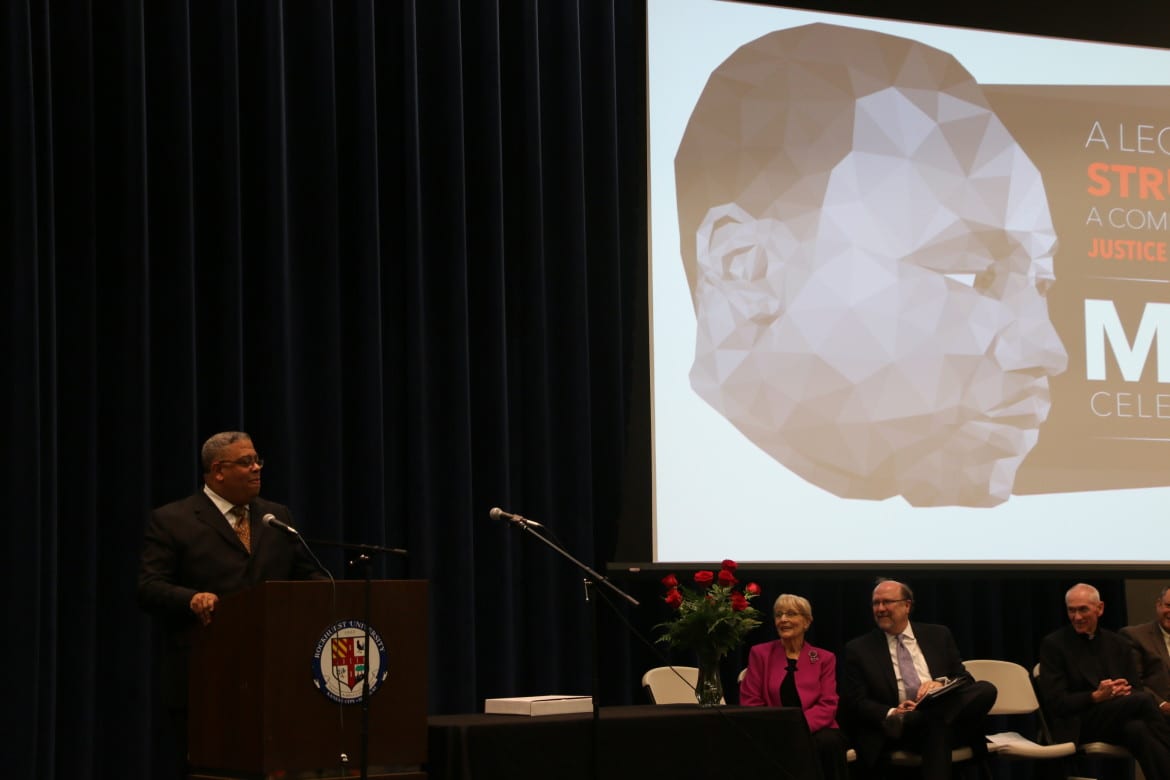 In addition to the Southern Christian Leadership Conference’s list of MLK-themed activities, Kansas City has multiple events celebrating King’s legacy before Martin Luther King Jr. Read below for a list of how you can get involved.

The Kansas City Jazz Museum is having a celebration that will include, musicians, poets, and dancers of all ages, in a performance honoring King’s life. Check it out.

How about some volleyball? The Heart of America Volleyball is hosting its annual Martin Luther King Jr. Volleyball tournament. Serve it up and spike it here.

Not into competitive sports? How about a walk in the park? The Kansas City Parks and Recreation Department is holding its annual Nature Walk to “reflect on Martin Luther King’s work.” The 1.5 mile walk extends from the Brush Creek Community Center to the Martin Luther King Jr. Square. Don’t worry, shuttles will take you back. Walk for MLK

The University of Missouri-Kansas City is holding a Martin Luther King Jr. lecture series. This year’s keynote speaker is Marc Lamont Hill, a CNN correspondent. Check the series out here.

“Without doubt one of the most vivid, heartfelt and theatrically astute pieces of dance theater ever to grace a Kansas City stage,” is how Kansas City Star’s Robert Trussell describes Storling Dance Company’s The Underground, an original ballet about the Underground Railroad and Martin Luther King’s iconic speech. Now in its sixth year at the Kauffman Center for the Performing Arts and ninth year overall, it is a piece of theater that is gaining national attention and is a Kansas City original. You do not want to miss it this year. Buy tickets here.