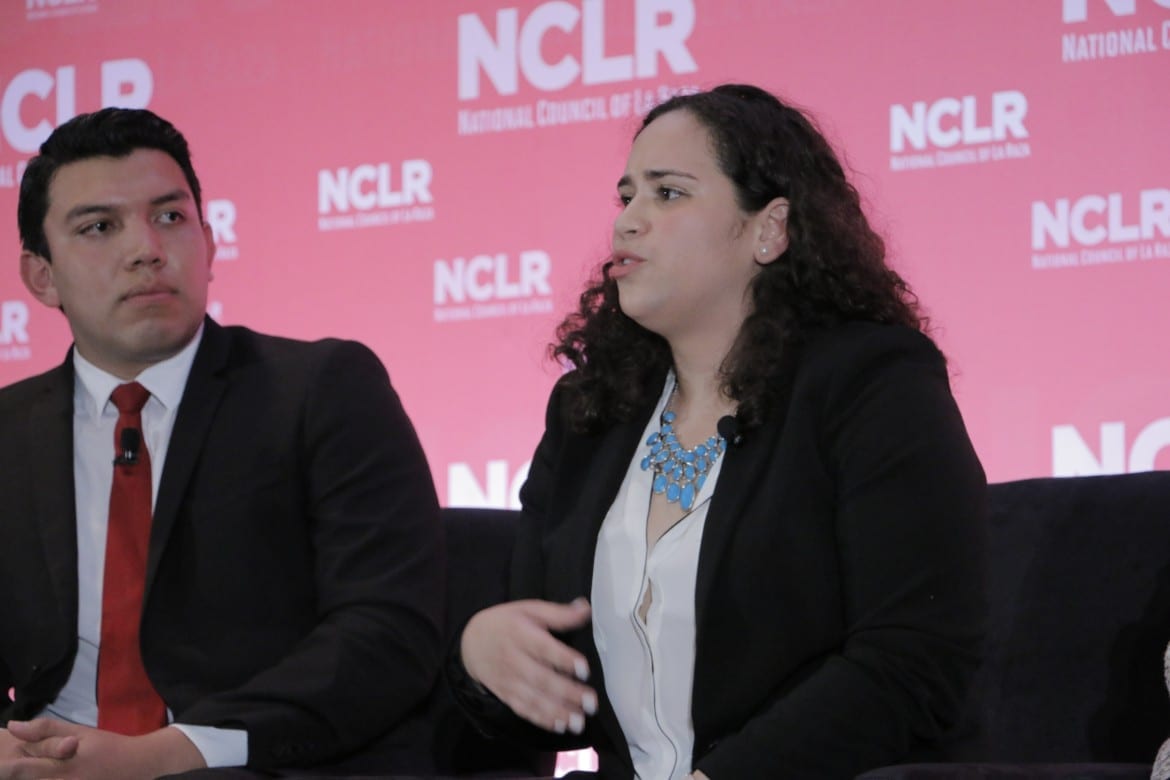 Fernando Rojas, who will attend Yale University in the fall, listened to Emily Gonzalez, a Brown University graduate, talk about postsecondary education at the National Council of La Raza conference being held in Kansas City, Mo. (Photo by Mike Sherry/The Hale Center for Journalism)
Share this story

Fernando Rojas and Emily Gonzalez are two young adults who know all about the trials and tribulations that Latinos face once they have overcome the first hurdle of getting into college, including navigating the financial aid system and overcoming parental anxieties.

And they recounted their experiences Saturday in front of an audience filled with Latino teens and young adults from around the country who were attending the annual conference of the National Council of La Raza (NCLR), which runs through Tuesday at the Kansas City Convention Center.

Rojas, the 2015 co-valedictorian of his class at Fullerton (Calif.) Union High School is heading off to Yale University in the fall. Gonzalez is a 2013 graduate of Brown University, who is now working as an advisor at a Providence, Rhode Island, an organization that helps low-income and first-generation college-bound youth enroll in college.

Gonzalez said she put off applying for college until the final hour because of the pain it was causing her parents. She went through with the application after receiving support from other family members and friends.

And, as for her parents, Gonzalez said she assured them that the courage she was mustering to go to college was something “that that they instilled in me the past 18 years of my life” and that she was emulating the courage it took for them to emigrate to the United States.

“I was doing the same thing,” she said. “I was living my life without fear.”

Rojas said he had much the same message for his parents, and joked that he asked them, “Why do you want me in the house? You have had me here 18 years. It’s time.”

Founded in 1968, NCLR is the largest national Hispanic civil rights advocacy organization in the United States. It has nearly 300 affiliated community-based organizations.

An accompanying family expo, which is free and open to the public, is expected to draw as many as 24,000 attendees over the four-day conference. The expo includes health screenings and more than 100 exhibitors.

The college panel took place shortly after a luncheon address by Missouri Gov. Jay Nixon, where he announced that he was vetoing higher-education legislation sent to him this year by the General Assembly.

He contended that the bill unfairly cut off students from a financial aid program even though they could  document they are in the country lawfully under the Deferred Action for Childhood Arrivals guidelines issued by the U.S. Department of Homeland Security in 2012.

Also on the college panel were Deborah A. Santiago, an executive with Excelencia in Education in Washington, D.C., and Gabriella Gomez, deputy director of postsecondary policy and advocacy with The Bill and Melinda Gates Foundation.

And as Rojas and Gonzalez recounted being snowed under by financial aid forms, Santiago and Gomez discussed initiatives aimed at simplifying the process.

As a former assistant secretary with the U.S. Department of Education and a one-time education advisor on Capitol Hill, Gomez said there is talk in Washington, D.C. about perhaps using information already on file with the Internal Revenue Service to help with the application process.

Santiago said some high schools are also incorporating the federal financial aid form into curriculum, such as in an economics course, to help students make their way through the form.

According to NCLR, more than 70 percent of Latino students graduated college with student loan debt. Meanwhile, according to the organization, Latino’s lag behind other populations in actually completing college.

As someone who needed remedial assistance upon entering college, Gomez said Latino students must be aware that those classes eat up financial aid. She also noted the need for some type of emergency help for students facing a cash crunch.

“Some students are dropping out because $200 that they owe,” she said.

Tags: Getting By in KC • health • higher education