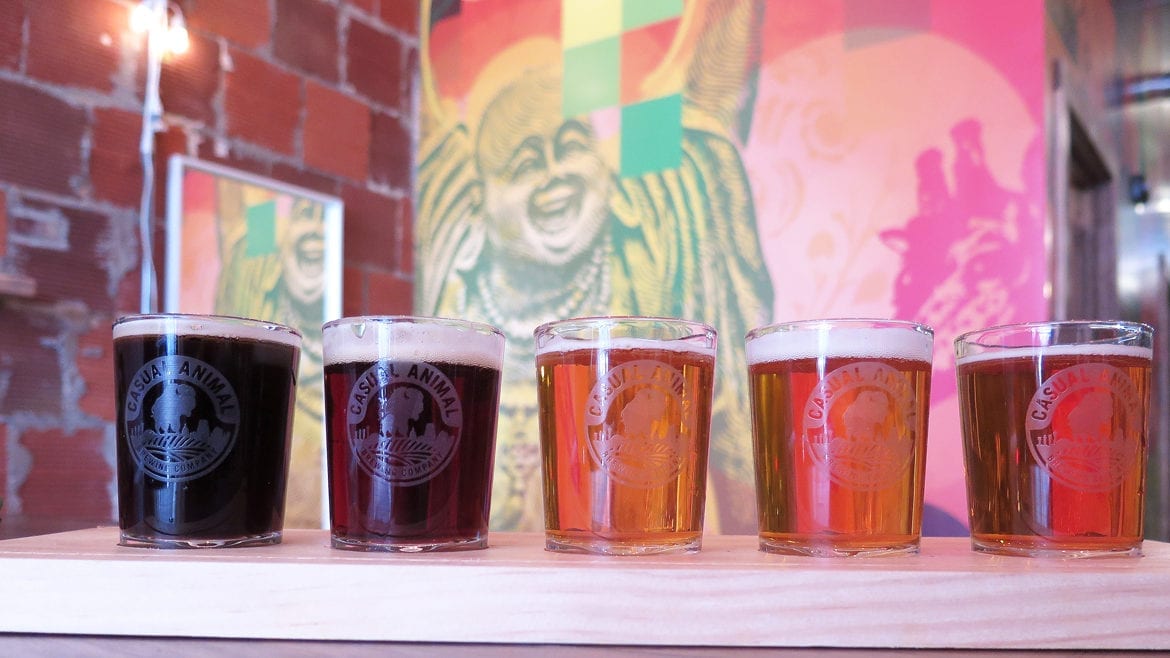 Owner and brewer Kyle Gray has five beers on tap including Treat Yourself Honey Wheat, Local Motive Pale Ale, Hoptify American IPA, Bear Hug Multigrain Brown Ale and Branch Out Stout. In addition to full 16-ounce pours and flights, the taproom offers a “swifty’ as an eight-ounce option. The smaller pour is convenient for those drinkers that want a bit more beer without committing to a full pour.

Casual Animal’s Local Motive program donates two dollars from each sale of a rotating beer toward a nonprofit partner such as BikeWalkKC. The nonprofit collaborated with Gray on input for Local Motive Pale Ale, the first in the series.

During its soft opening, the cozy space attracted visitors as a refuge from the snow. The taproom has a shuffleboard table and board games to help pass the time. While the taproom doesn’t offer food, guests may bring in food from other venues, including the brewery’s next-door neighbor, The Brick, or craft beer bar and restaurant Tapcade a few storefronts away.

Courtney James Brewing Company aims to be the first Kansas City area brewery owned and operated by a female head brewer. Once they secure funding, Courtney Servaes and her business partner Jamie Gerke intend to open a 2,500 square-foot brewery and taproom in North Kansas City in 2018.

“We met through a mutual love of beer, but we bonded over a mutual appreciation of progress,” Servaes said. “We care very deeply about the world and our place in it. And we want to translate that passion for progress into our brewery.”

“A three-barrel system is big enough that we can can have a rotating list of beers so every time you come in, you’ll get something new,” Servaes said. “We also plan to do a monthly bottle or can release that will feature something limited.”

Servaes and Gerke have their sights set on North Kansas City for the brewery.

“We wanted to be close to other breweries,” Servaes said. “North Kansas City is really at the heart of the KC brewery world. There are a growing number of breweries in North Kansas City, and we really like the idea of being a part of that culture.”

As a homebrewer, Servaes has earned accolades for her beers at homebrewing competitions in recent years from the Kansas City Bier Meisters, Iowa Brewers Union, Lincoln Lagers, Topeka Hall of Foamers and other groups. Her beer recipes have also been scaled up on a professional brewing system. Now Servaes and Gerke are ready to make the leap to professional beer production.

The duo seek to raise $35,000 in additional funds through Kickstarter. If successful, the money will supplement up to $400,000 in funding from angel investors, a local bank and local credit union.

“We aim to push boundaries with our beers. Our goal is to constantly produce a variety of fun-filled, unpredictable, but top-notch beers,” Servaes said. “When you step foot inside our taproom, you won’t find a lineup of traditional beers. Instead, you’ll find beers that are fun, whimsical and unexpected. Expect something different every week.”

Servaes mentioned gender roles as a groundbreaking distinction for the brewery.

“There are a lot of great breweries in Kansas City, some even have female brewers. But none of those breweries feature a head brewer and owner who is female,” Servaes said. “Jamie is a nurturer. We don’t share traditional gender roles. It makes us click. That is the main reason we chose the astronaut as our logo. We felt that it exemplified the idea of progress and the constant need to break boundaries and explore new ideas and beliefs.” Boulevard Brewing Company’s new year-round beer Jam Band is now available in Kansas City on draft and in six-packs. The beer combines flavors of blueberry, raspberry and tart cherry juices that were blended into the beer at the end of fermentation. Aromas of dark berries, melon and citrus complement the slightly tart flavor.

Tallgrass Brewing Company plans to release German Chocolate Cake, a stout brewed with toasted coconut and cocoa nibs this spring, in honor of its 10th anniversary.

Stockyards Brewing Company recently announced that it will work with distributors to bring its beer on tap to Kansas soon. Details to come.

Crosstrails Brewing Company, a brewery in planning in Olathe, Kansas, is seeking a head brewer. Torn Label’s Lup Sup is out this week. (Courtesy of Torn Label)