What Are the Open Belief Centers in KC?

You Asked and We Went On a Spiritual Journey 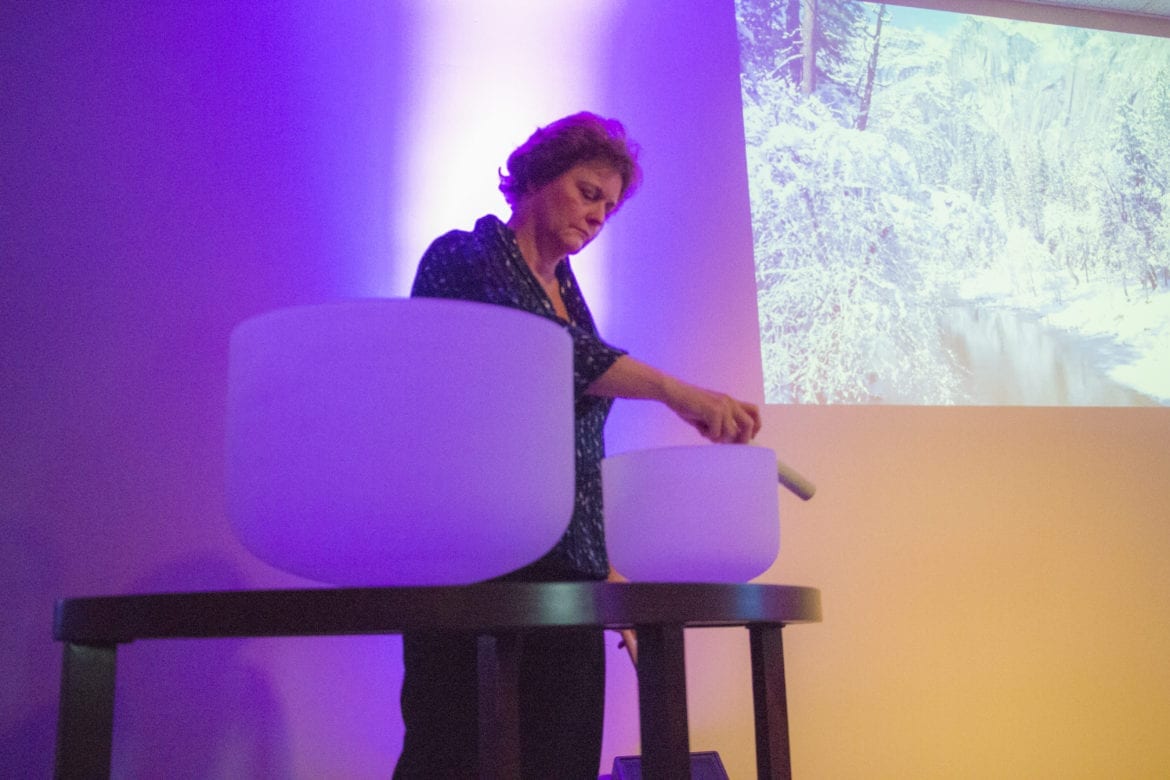 Sharon Divine plays a crystal singing bowl as part of a Dec. 23, 2017, service at the Center for Spiritual Living in Overland Park, Kansas. (Mike Sherry | Flatland)
Share this story

Sharon Divine found faith as an adult. Or rather, she lost religion and then found faith. Divine grew up as a Christian attending Methodist, Lutheran, and Unity churches at various points in her life. The older Divine got, however, the less traditional religion seemed make sense to her.

“There‘s nothing wrong with religion, I think there’s all different paths. But to me, religion feels a bit confining. ” Divine said. “There’s a dogma, and there’s always ‘Well, you have to believe this way.’ Well, no, I mean, I want to hear about it, I want to learn about it, but I also want to kind of pull answers from within.”

Divine eventually found the Center for Spiritual Living. It is a faith system that speaks to her, and she’s been a member of the CSL Crossroads congregation for about five years. The center, led by Spiritual Director Jarie Newsome, pulls from all different belief systems.

“I believe in the threads of truth that go through many faith traditions, and so I find those threads,” Newsome said. “There are just so many similarities, and beautiful threads that all relate. When you say love, every faith tradition, every religion will say, ‘Oh, yes.’”

Divine wondered if there were other similar spiritual centers in Kansas City and posed the question to curiousKC. She didn’t want religious centers with a strictly defined belief system. Rather, she wondered about centers with more open belief systems.

“What are the different spiritual centers (as opposed to religious centers) available in the Kansas City area? And how do they differ?” — Sharon Divine to curiousKC

These spiritual belief systems, although not as well-known as traditional religions, are a part of Kansas City’s interfaith community. Members of these spiritual congregations often draw a sharp distinction between spirituality and religiosity.

“Religion is generally defined as like-minded people gathering together in a group that promotes that shared concept of the divine. Religions also has a tendency to be hierarchical and preaches a belief system that each adherent to that faith is expected to follow,” Unitarian Minister Mary McCoy said. “Spirituality is more of an internal, individual process by which one finds the depth of meaning in their life, and life in general, and lives their life in a way the promotes that individual thought.”

McCoy is a member of Alliance of Divine Love, a congregation made up of a group of ministers from many faiths.

“I was in a process of educating myself on all religious thoughts, when I met a couple of ADL ministers and learned from them the belief in the power of divine love,” McCoy said. “The fact that there was no dogma, and the fact that the ministers were interested in teaching, and healing, and helping, rather than directing, struck a chord with me. I was like, ‘Yeah that’s what I want to do, and it struck a chord with me. ”

McCoy works with other ADL members and a variety of religious leaders to promote causes and interfaith work centered around this belief in divine love. As such, while McCoy draws a distinction between religion and spirituality, she said the two can — and should — overlap.

“In a perfect world, the two would coincide. In the imperfect world, I don’t know that they do coincide,” McCoy said. “In effect though, to be totally spiritual, means to be a feeling for how other people are feeling, or having a feeling for your relationship in the world and in the universe. That’s not what standard religion is always designed to do.”

Other spiritual leaders and members are more critical of the relationship between religion and spirituality.

Carrah Quigley is a mentor and counselor who works to help people find a spiritual practice that fits with their life and belief system.

“I find that people who have left religion, for many of them, find they still need to pray, they find that they still need something, they find that they’re empty inside,” Quigley said. “So what that means then is that there is a natural tendency towards spirituality, which inevitably was hijacked by religion. To talk of souls is not a religious thing, to talk of spirituality is not a religious thing, these things exist in us naturally.”

A Sampling of Non-Secular Groups Around the Metro

“We get a lot of reactions that are often like, ‘what?’” McCoy said. “We do find that when we are approached by a college or community that wants to have someone come and speak, very rarely does anyone want or ask to include anything that is new thought. Most people are simply not aware that there are other religions besides Abrahamic, and some Eastern.”

Quigley has also found people do not know a lot about spiritual belief systems. However, she does think there is a growing awareness for spirituality removed from traditional religion.

Correction: This article has been updated with the correct spelling of the first name of the spiritual director.

— Humera Lodhi likes numbers, words, and coffee. She works at the intersection of tech and journalism. Follow her on Twitter at @HumeraLodhi.
The author is a student in a convergence journalism class at the University of Missouri-Columbia.

One thought on “What Are the Open Belief Centers in KC?”