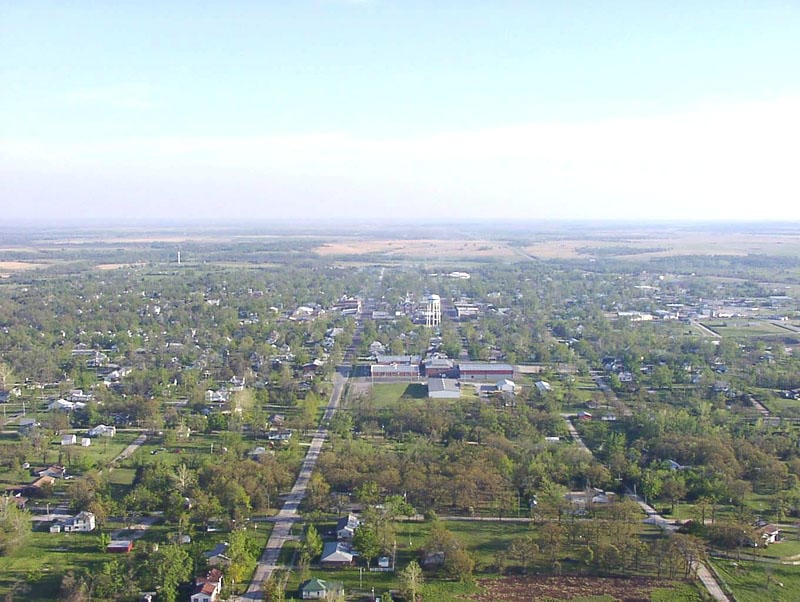 An aerial view of Yates Center, county seat of Woodson County, which ranks among the least healthy counties in Kansas. (Credit: www.woodsoncounty.net)
Share this story

A cluster of counties in southeast Kansas are among the least healthy in the state, according to new rankings released Wednesday.

Four of the five state’s unhealthiest counties — Woodson, Cherokee, Greenwood and Labette — are in southeast Kansas. Several other counties in the region rank among the bottom 10.

But the director of an initiative launched in 2011 to address the underlying causes of the region’s health and economic problems said progress is being made.

“We can have big goals, but this is a one-at-a-time problem,” said Heather Morgan, executive director of the initiative known as Project 17. “If it was easy to break this cycle of generational poverty, somebody would have already done it.”

Project 17 derives its name from the number of southeast Kansas counties that started it.

Factors known collectively known as the social determinants of health are conspiring to keep counties in the southeast corner of the state at the bottom of the rankings.

When it comes to the overall health of populations, rates of poverty and obesity matter. So do high school graduation, teen birth and smoking rates. Access to healthy foods, clean water and places to exercise also factor into the rankings.

Woodson County is a good example. The 2015 report released Wednesday by the Robert Wood Johnson Foundation and the University of Wisconsin Population Health Institute lists it as the least healthy of the 101 Kansas counties ranked. Higher rates of childhood poverty, teen birth and smoking are among the reasons for the county’s bottom-of-the pack ranking.

In addition, the county is home to more physically inactive adults and fewer who have completed any post-secondary education.

All these factors combine to make residents of the county less healthy than people living in other parts of the state, according to Tatiana Lin, a senior analyst at the Kansas Health Institute.

“Our health is shaped by multiple factors,” Lin said. “People are more likely to thrive if they have access to healthy food, quality housing and good education. These determinants of health are often the most difficult to change, but you have to tackle them if you want to move the needle and improve the health of your community.”

Morgan understands that many of the factors that influence health are rooted in poverty. In an attempt to start addressing the causes of the “intergenerational poverty” that has long plagued the region, Morgan said Project 17 has launched a program called Circles Out of Poverty in a handful of southeast Kansas communities.

“Circles is a community-based program that helps people build social capital and relationships to help them to make that jump out of poverty and into the middle class,” Morgan said.

The goal of the program is to equip participants with the tools and community connections they need to improve their overall quality of life. That starts, Morgan said, by increasing their annual earnings to twice the federal poverty level: more than $23,000 for an individual and $47,000 for a family of four.

The program, funded by an annual grant of $98,000 from the Casey Family Programs foundation http://www.casey.org/ , provides participants with 12 weeks of structured education and training. On-site child care and meals also are provided.

In addition to the training, participants, known as “circle leaders,” are paired with mentors to help connect them to other community resources.

In the next couple of weeks, the program’s first 26 graduates will be honored at ceremonies in Chanute, Pittsburg and Ottawa, Morgan said.

A woman in the Pittsburg program regained custody of a child who had been placed in foster care and a homeless mother of two was able to get temporary housing through the Ottawa program, Morgan said.

“The community really rallied around her,” Morgan said. “That would not have happened without circles.”

The third “success story” occurred in Chanute, where two former mayors — Tim Fairchild and Ed Cox — volunteered to help with child care and made strong impressions on some of the children.

“Some of the young boys appreciated Tim and Ed because they never had a positive male role model in their lives,” Morgan said. “That was pretty profound coming from little kids.”

Two new circle programs are scheduled to begin in Fort Scott and Paola this spring and summer, Morgan said.