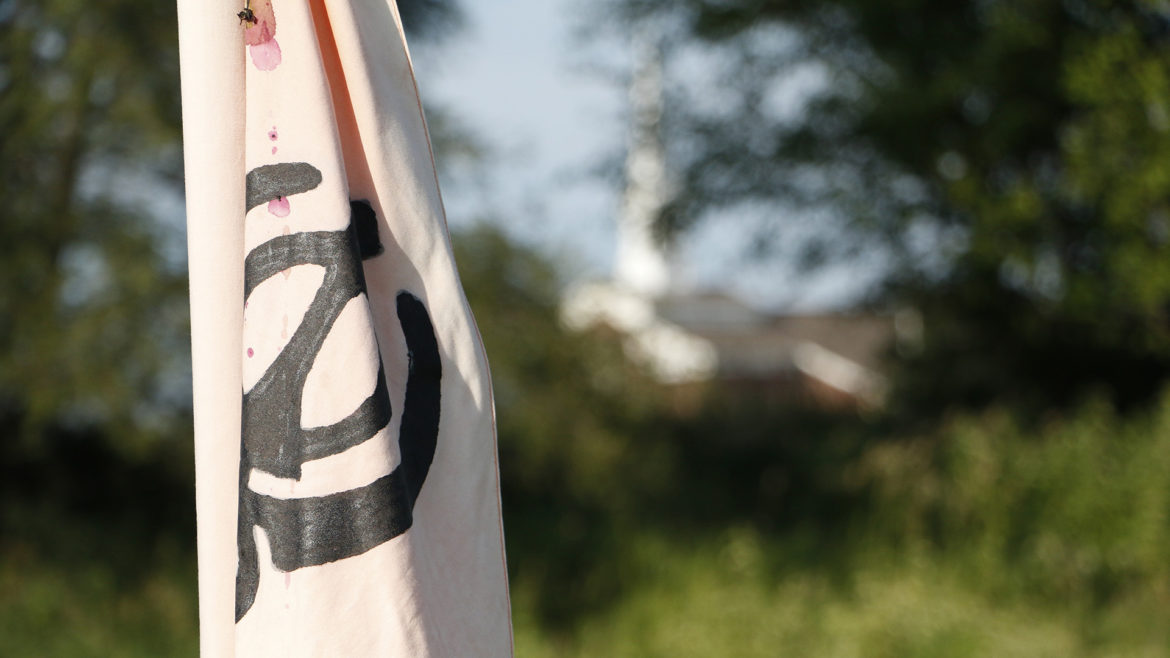 A Sikh congregation has planted a flag at a site in Lenexa, Kansas, where it plans to build a new temple. The temple will share the corner at 101st Street and Lone Elm Road with the Mormon church in the background. (Mike Sherry | Flatland)
Share this story

On the southwest corner of 101st Street and Lone Elm Road in southwest Lenexa, not far from the Falcon Ridge Golf Course, is a large church. It’s a congregation of the Church of Jesus Christ of Latter-day Saints, usually called the Mormons.

The path from the creation of Mormonism in the early 1800s to today has been rocky, indeed, often full of violence against followers of that faith, including the Mormon-Missouri War of 1838. But today the LDS church, with headquarters in Salt Lake City, is considered just one of many traditional religious paths in the U.S. and its congregations are in many Kansas City area neighborhoods.

If you turn and look across Lone Elm, you will see, so far, simply a vacant field of weeds, grass and wild bushes. But a closer look reveals a small yellowish flag on a pole. It bears the symbol of the Sikh religion and announces the any-day-now start of construction of another house of worship that, like the nearby LDS church, also has been outside the mainstream of religion in America.

A gurdwara, or temple, is being built there on 12 of the 42 acres owned by the Sikh congregation that has met in Shawnee, Kansas, at 6834 Pflumm Road, since 1987. Ground was broken at the Lone Elm site in April.

Earlier this month, the president of the congregation, Swinder Singh, an executive with United Parcel Service, stood with me at the construction site and imagined what’s coming.

“It will be beautiful,” he said of the structure to serve about 150 families. “We are proud of being in this country and that they accommodate us.”

Singh says he can’t wait for the new facility to be completed. It will be one more indication that “we are part of the American culture and tradition.”

What we are witnessing at this suburban intersection is a small part of a national story of growing religious pluralism in the U.S. That modern growth started when President Lyndon B. Johnson signed immigration reform into law in 1965. Since then America’s religious landscape has changed, sometimes dramatically, as people from around the world, but especially the Southern Hemisphere and Asia, have found a home in the U.S.

They have brought with them their Hindu, Sikh, Islamic, Buddhist, Jain and other religious traditions, along with various strands of Christianity, from the Lao Baptists to the Korean Methodists.

Sometimes the transition has gone smoothly, but often not. Indeed, one of the major disruptions in the process occurred because of the 9/11 terrorist attacks in 2001. That resulted in a lot of anti-Muslim feeling in the U.S., much of it bordering on incoherent paranoia. And Sikhs sometimes were mistaken for Muslims and attacked or simply targeted for being different.

In 2012 a white supremacist in Wisconsin shot up a Sikh gurdwara, killing six people and wounding four more.

And in 2017, a hate crime in a bar in Olathe resulted in the death of an Indian man and the wounding of two of his friends merely because they appeared to the shooter to be unwanted foreigners.

This is the kind of reaction Sikh leaders here are working to prevent.

When plans for the new temple were announced a couple of years ago, area neighbors and city officials had questions. But, Singh says, “We pretty much cleared those questions. There’s no issue now. We are totally happy with the city. We are happy with the neighbors. Everyone is supporting us. And we appreciate especially the city and the neighbors who are going to welcome us.”

In the meantime, anyone who wants to visit the current gurdwara to learn more about Sikhism is welcome, Singh says: “We do welcome everyone, everyone” to Sunday services and lunch. There visitors will hear a “granthi,” or ceremonial reader, share some of the religion’s sacred texts.

Sikhism is a monotheistic religion that developed in India about 500 years ago. Today there are some 25 million Sikhs in the world, many of them still in the Punjab area of northwest India. Singh himself is a native of there and spent 28 years in India’s navy before moving to the U.S. in 2002 because his in-laws already were here.

The story of how other religions have struggled to find their place in American culture began in the early 1600s when members of the Church of England settled Jamestown in Virginia. After that the conflicts among other Christian branches, Jews and deists helped to shape much of the nation’s early history.

The increasing religious pluralism of the U.S. today means that in neighborhoods around the country something like the bi-religious nature of the two houses of worship at 101st and Lone Elm is being repeated. And a religiously literate nation should welcome that.