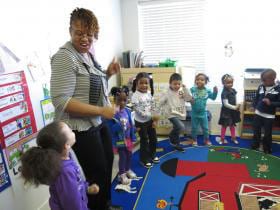 Every parent knows that young children have meltdowns now and then – at home, at school, in the grocery store – but sometimes a tantrum can be more than a bad day. It can be the sign of traumatic stress.

A program started in Kansas City, Kan., offers teachers and parents an alternate way to deal with intense emotions and potentially avoid the long-term impact of trauma. The program has been spreading in recent months, even getting national attention.

In the basement of Wyandotte United Methodist Church in Kansas City, Kan., teacher Twakisha Jones leads her small preschool class through a song.

They are a cheery bunch, but Jones recognizes that some of her young students deal with a lot in their lives.

“We don’t know what things happen at home,” Jones explains. “But when they come in, they come in with all kinds of problems – I mean – if you watch different things that happen in neighborhoods, especially being low-income families.”

Trauma can take the form of abuse or violence, but trauma can also be less direct, including experiences like neglect or witnessing violence.

To some degree, trauma effects one in four children in the United States, according to the local creators of a program designed to address the problem.

Head Start Trauma Smart was developed by Crittenton Children’s Center, part of the St. Luke’s Health System of Kansas City. It got off the ground in Wyandotte County preschools in 2008.

Avis Smith, who directs the program, says that the standard method of shutting down tantrums through punishments or timeouts is a mistake, especially for traumatized kids.

“Children need to feel connected to the adults around them and to their peers,” says Smith. “And so if we can do something to acknowledge feelings that then allows that child to know, ‘Oh, she gets it. She really understands. I’m really upset. [It] doesn’t mean I can hit my friends, but she understands this was really upsetting to me.’”

The program was designed for Head Start, the national early education initiative focused on children from lower-income backgrounds.

Head Start Trauma Smart gives 20 hours of training to preschool teachers, who use the techniques with all of their students.

Teachers work to relate to upset kids, then to help them calm themselves with the help of a calm-down station. These stations include soft objects to handle and sunglasses, which help lower stress by lower light levels.

They also use what they call a breathing star. It is a file folder with a paper bird character inside that seems to breathe in and out as the folder opens and closes.

For kids who need extra help, Cohoon comes into the school to do weekly one-on-one work.

The program also offers training to school staff, like cafeteria workers and bus drivers, to keep the message consistent. Parents also get trained in the techniques.

Ultimately, the goal is for children to calm themselves.

Twakisha Jones says she sees that happening in her classroom.

“If someone’s upset, we’ll even have another child tell that one, ‘Oh, you need to calm down. Take a deep breath or something,’” says Jones.

Head Start Trauma Smart is about more than soothing hurt feelings. It is designed to help children cope with issues that can have serious consequences. Trauma can effect brain development and a child’s ability to learn.

“Their brains are constantly thinking about ‘Where is this potential threat? What can go wrong in this situation? Who might be wanting to hurt me?’” explains Dr. Jerry Dunn, executive director of Children’s Advocacy Services of Greater St. Louis. “And so they’re not able to really marshal their resources cognitively to think about, ‘How am I going to sound out this word? How am I going to figure out this subtraction problem?’”

Dunn says that childhood traumatic stress can eventually lead to dangerous and unhealthy behavior in adolescence and beyond.

In other part of the country, a handful of similar programs, like the Circle Preschool Program in Richmond, Va., have cropped up recently.

The local program really started to take off in the fall of last year. The Robert Wood Johnson Foundation granted nearly two and a half million to help the program expand to 26 counties in both Kansas and Missouri, serving about 3300 preschoolers.

Last month, the program got a write up in the New York Times blog the Opinionator.

Program director Avis Smith says in the past few weeks, interest has snowballed.

“We’ve had phone calls and emails from people as far away as Cape Town, South Africa to Grenada to British Columbia,” Smith says.

The new attention has brought critics, including some who wonder how stretched-thin education funding can bear the cost of Head Smart Trauma Smart. The program costs 400 dollars a year per student.

But Smith believes it can prevent the need for more expensive special education in later years. And prevent even bigger problems beyond that.

“We can stop the adverse effects of trauma from starting a child on that school-to-prison pipeline that has been so talked about,” says Smith. “Early childhood education is our very best investment.”

So far, the program has shown gains in measures of classroom relationships and emotional and instructional support.

Since the program is still in early stages, it is probably still too early to say what impact the program may have over the longer term.

But Head Start Trauma Smart is an investment its creators hope the public will be willing to make.