At Youth Speak Event, Teens Read Original Poetry About the Harder Side of Life in KC 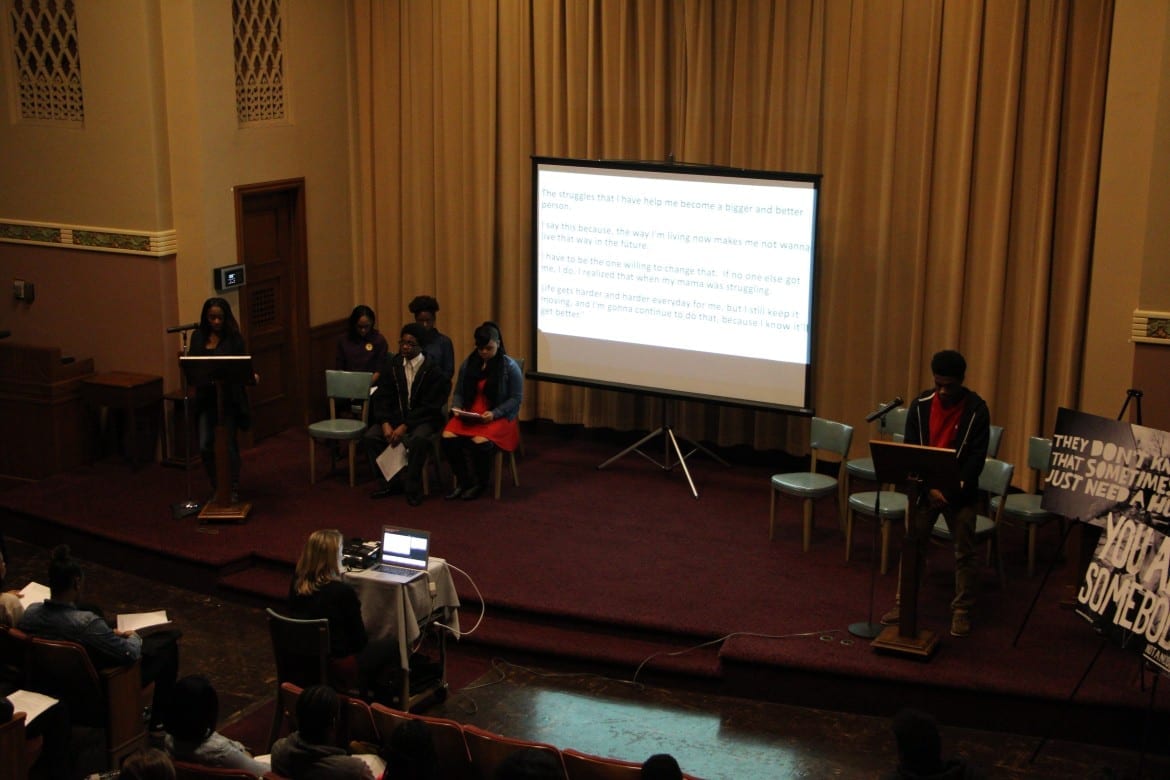 It is not easy being a teenager in Kansas City. As inner-city teens enrolled in the Youth Ambassadors program took turns reading each other’s original poetry, their works gave insight into the sometimes harsh realities and struggles facing our community’s younger demographic.

Teen pregnancy, life on the streets, drug addiction, violence towards women, and incarcerated parents are some of the many mature and difficult topics expressed by the teenagers during the Youth Speak event held at Unity Temple on the Plaza last Tuesday, March 1st. Nearly 20 Youth Ambassadors penned the poetry from their own personal experiences.

While the subject matter tended to be emotionally heavy, Youth Ambassadors co-founder Tiffany Lynch said the idea behind the night of poetry was to inspire hope in the teens who took part in the event.

“We are giving these teens an opportunity to share their voice, and share what life looks like from the urban core,” Lynch said. “It’s not often we get to hear the voices of urban teens in a positive way, and this allows them to work through some of their issues, and find hope through expressing themselves,” she said.

Youth Ambassadors is a not-for-profit teen empowerment program, according to its website. Founded in 2010 in Argentine, Kansas, Lynch said Youth Ambassadors is essentially a series of non-credited classes that equip teens with “writing skills, job skills, life skills, writing, health, art and public speaking”. Taking place in community centers around the city, Youth Ambassador’s goal is to give teens skills and confidence for the larger world.

Funded by the Kauffman, Hall Family, and Kemper foundations as well as others, students enrolled in Youth Ambassadors are paid minimum wage to attend classes. Lynch said the paycheck is what sets her organization apart from others, and is a major contributor to their success.

“For some of these kids, who may have seen adults in their lives make money any way they could, the paycheck is a form of healing,” she said. “They feel a sense of pride, understanding the joy of an honest dollar,” she said.

Lynch said it also keeps them engaged and participating in the classroom, where instructors are mentors to the students.

“Our class size is small comparatively,” she said. “The ratio is about 7 to 1. But we do that on purpose. It is all about really teaching these kids to live their best life,” she said.

— Daniel Boothe is a reporter for Kansas City Public Television’s Hale Center for Journalism. To reach Boothe, email him at dboothe@kcpt.org.

"Spotlight on the Spoken Word" Coming as Digital Series

Some rhyme, some don't. But it's the rhythm, man, that sends us afloat