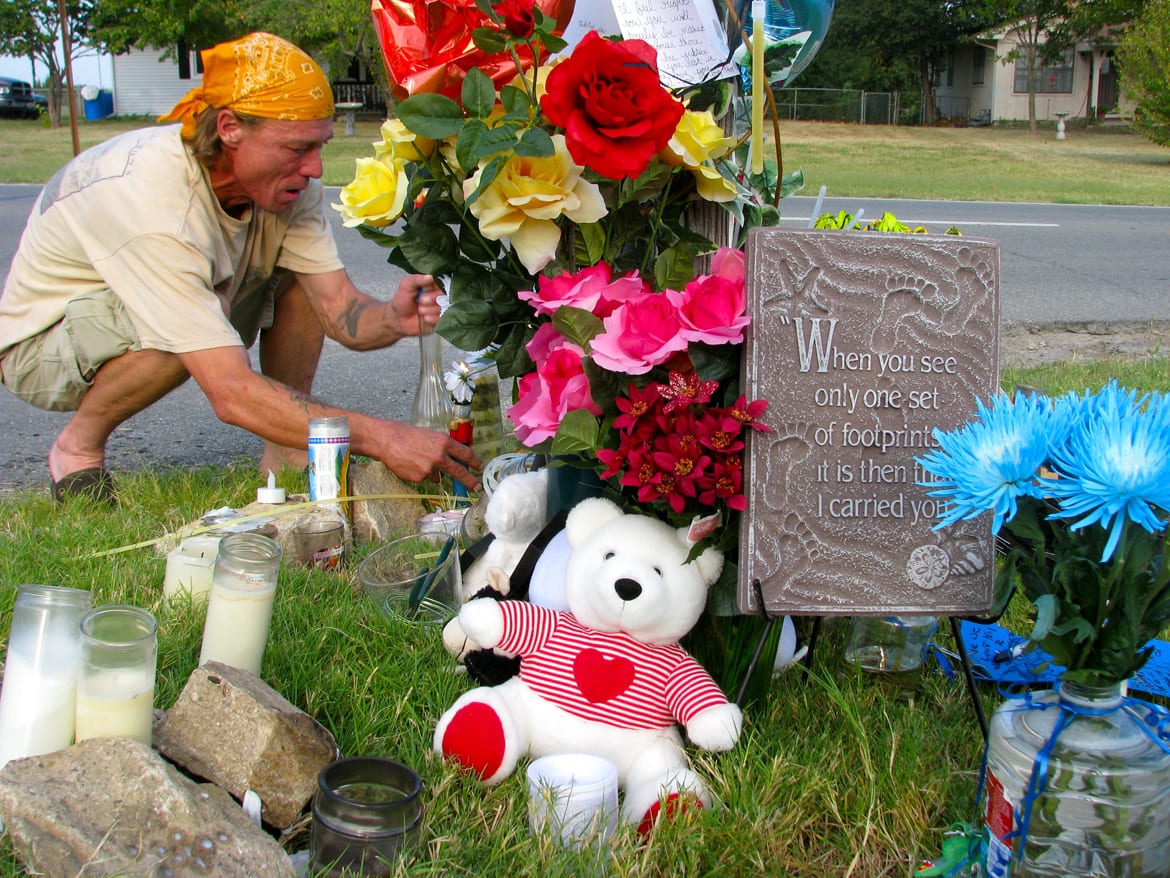 James Green, a second cousin of Joseph Jennings, lights a candle that’s part of a curbside memorial created by Jennings’ friends and family members near the Orscheln Farm & Home store in Ottawa. Jennings, who had a mental illness, was shot and killed during an Aug. 23 altercation with Ottawa police in the store’s parking lot. “The world needs to understand that there are people out there who has issues and need help,” Green said. “This shouldn’t have happened.” (Photo by Dave Ranney/KHI News Service)
Share this story

Out of the 8,000 full- and part-time law enforcement officers in Kansas, only 1 in 4 have been trained to handle crisis calls involving the mentally ill.

The other 20 percent – about 360 officers – are spread across police and sheriff’s departments in the remaining 101 counties.

“We’re trying to address that,” said Rick Cagan, executive director of the National Alliance on Mental Illness in Kansas. “It makes sense to have most of your crisis-trained officers in your metropolitan areas, because that’s where you have the most people. But at the same time, we have a lot of areas in the state that don’t have someone on their staff who’s been trained.”

Since 2007, NAMI Kansas has coordinated annual conferences that link police and sheriff’s departments with mental health officials in their communities to form crisis intervention teams(CIT).

The need for – or a consequence of not having – crisis intervention training was underscored last month when Ottawa police officers shot and killed 18-year-old Joseph Jennings during an Aug. 23 parking lot altercation outside the Orscheln Farm & Home store.

‘Never got a break’

Since aging out of the state’s foster care system in December, Jennings had been living off and on with Smith and her husband, Billy, and with his grandmother, Charlene Smith. Jennings had lived in foster homes since he was 11.

“He was just a really good kid who never got a break,” Brandy Smith said. “I love him like a son.”

Smith said that four days before the shooting, Jennings was hospitalized for a seizure that “lasted an hour and a half.”

At home three days later, he attempted suicide. “It was a drug overdose,” Smith said. “He’d taken all his pills, like 10 trazodone (an antidepressant) and 50 Ativan (for anxiety), all at once.”

Jennings spent that night in the psychiatric unit at Ransom Memorial Hospital. “He was discharged the next day at 4:20 p.m.,” Smith said. “We brought him home, he took a nap, he got up and he asked me for his keys because he wanted to go for a ride – he loved his motorcycle.

A few minutes later, she said, Jennings rode his motorcycle around the block. When he returned he was upset.

“His bike had broken down and he couldn’t get it started, which really got him agitated,” she said. “I said, ‘It’s OK, we’ll get it fixed. Go for a walk. Calm down,’ and I went in to start dinner. The next thing I know, my husband runs in and says, ‘They’re getting ready to shoot Joe in the parking lot!’”

Smith said she ran barefoot to the Orscheln parking lot, which is about a block from her house. “I was screaming at them (police) at the top of my lungs: ‘Don’t shoot him! He’s suicidal! That’s Joseph Jennings! Don’t shoot him!’”

After the shooting, Ottawa law enforcement officials said officers had responded to a report of an armed man in the Orscheln parking lot. Police have neither confirmed nor denied that Jennings was armed. They’ve also not indicated how many times he was shot.

Smith said she and her husband don’t own a gun and that Jennings had never indicated that he owned a gun.

“I was there and I didn’t see a gun. My husband was there and he didn’t see a gun,” she said. “There were other witnesses there, and none of them have come to us and said they saw a gun. This happened in broad daylight. But I’m not going to argue with them (police) because I don’t know what they saw.”

Two of the policemen involved in the shooting, she said, had visited with Jennings prior to his hospitalizations earlier in the week.

“They had to have known who he was and that he was not alright,” she said. “But I don’t want this to be about that. I want this to be about police officers getting the knowledge and training they need so that this doesn’t happen again and no other family has to go through what we’ve been through.”

The Kansas Bureau of Investigation is investigating the events leading up to Jennings’ death.

“Our Crime Scene Response team was called to Ottawa on Saturday (Aug. 23) evening and worked through Sunday afternoon,” said Mark Malick, KBI special agent in charge of investigations. Another KBI team was called in to investigate the incident with the Ottawa Police Department and Franklin County Sheriff’s Office.

Often a matter of money

It’s unclear how much the crisis intervention training is likely to cost a small city’s or rural county’s law enforcement agencies.

“Like a lot of things, it all comes down to money,” said Jim Kramer, president of the Kansas Sheriffs’ Association. “Your smaller (law enforcement) departments can’t afford it, and it’s not something they use every day so it’s not in the limelight of the (county) commissioners or the (city) councils when it comes time to put your budget together.”

Kramer, who was chief of police in Cimarron for 18 years before becoming Gray County sheriff eight years ago, said most “rural and small-town” departments call their area mental health center for assistance when they’re summoned to deal with someone who’s thought to be mentally ill.

“If we’re dealing with someone who’s mentally ill, we call Area Mental Health (Center in Garden City) and they’ll send somebody over to evaluate them,” he said. “We do that before we go into arrest mode. That’s how most departments handle it. But that assumes we could get the individual calmed down and the situation wasn’t lethal.”

Kramer said his deputies are equipped with Tasers; their supervisors have non-lethal shotguns that fire pellet-filled bean bags, which can be more lethal than Tasers.

“It’s a local thing,” said Cagan of NAMI-Kansas. “There are some state and federal grants out there, but fundamentally it has to be a local initiative. That’s OK because the basic concept behind CIT is for this to be a community-level partnership and for there be an ongoing dialog between law enforcement, mental health providers and consumers.”

Police and sheriff’s departments also have the option of sending officers to a weeklong course at the Kansas Law Enforcement Training Center near Hutchinson. The voluntary classes, which are similar to CIT, are offered twice a year for up to 35 students.

“It’s advanced and specialized training given to specific officers to respond to mental health emergencies,” said Mark Damitio, deputy assistant director at the training center in Hutchinson. “It’s provided in much the same fashion or belief that not every cop out there has to be a canine officer, not every cop has to be a narcotics detective, and not every cop has to have an advanced level of CIT training. But it sure is great when there is someone with that specialized talent who can respond” to a crisis call.

In 2012, Kansas legislators passed a resolution that declared CIT to be “best practice” in Kansas. Lawmakers also agreed to set aside the $50,000 that’s now used to underwrite the two classes at the Kansas Law Enforcement Training Center.

The $50,000 is used to cover the room-and-board and training-material costs for 60 to 70 officers over a two-week period. The officers’ employers are expected to pay costs of covering their work shifts while they are in Hutchinson.

More funding in the works

In May, Gov. Sam Brownback announced that his administration planned to spend an additional $9.5 million on mental health services in the fiscal year that began July 1.

The plan, he said, included $500,000 for a not-yet-defined grant program aimed at diverting the mentally ill from the state’s jails and prisons.

“We’ll have an announcement on this soon,” Eileen Hawley, Brownback’s communications director, wrote in an email to KHI News Service.

Recommendations on how to spend the $500,000 are being developed by the governor’s Law Enforcement Behavioral Health Advisory Council, a group that includes Kansas Attorney General Derek Schmidt, Kansas Department of Corrections Secretary Ray Roberts, Sedgwick County Sheriff Jeff Easter and Bill Cochran, a captain with the Topeka Police Department.

“We’ve had two telephone conferences and we’re getting ready to have a third,” Cochran said. “We’re still looking for the best, most efficient way – within the dollars that are available – to bring law enforcement and correction officers throughout the state more up to speed when it comes to dealing with people in mental health crises.”

“CIT is a 40-hour curriculum; Mental Health First Aid is eight hours,” he said. “Your smaller departments can’t afford to give up an officer for 40 hours. Eight hours might be more affordable.”

But the cost of the programs, Cochran said, isn’t the only factor driving training decisions.

“In law enforcement, we spend a lot of money doing a lot of other things,” he said. “So a lot of this comes down to choosing how these dollars are going to be spent. I tell people: We’ve become very proficient in training our people on firearms; we’ve spent a lot of time and money doing it. That’s a good thing, but the likelihood of an officer using that firearm on a daily basis is pretty minimal.

In June and July, he said, Topeka police responded to 90 calls, involving someone threatening suicide. Officers were on the scene for one to two hours for most of those calls.

Sam Cochran, no relation to Bill, had a hand in launching the nation’s first CIT program in 1988 as a Memphis police officer.

“It’s not a perfect program by any means,” said Sam Cochran, who is now retired. “And I don’t want anyone to think that just because they have CIT they’ll never have to worry about something like this (Ottawa shooting) happening again. It’s not a panacea, but it’ll give responding officers some alternatives that they may not have now and, hopefully, it’ll slow things down and open up communication.”

On the national level, Kansas’ CIT programs often are cited for their progressiveness, Sam Cochran said.

“The expertise and the commitment for making this happen are there,” he said. “My advice for the people of Kansas is to go to their county commissions and city councils and say, ‘We want to see specific money put in the law enforcement budget to cover the overtime costs of sending two or three officers to CIT.”