According to the Pew Research Center, Islam is the fastest-growing religion in the world, and Muslims currently make up just less than 1 percent of the total U.S. population. Pew projects the numbers of Muslims in America to grow to 2.1 percent of the population by the year 2050. What these findings suggest is that Islam, like all religious traditions, is not an ethnicity, race, or Facebook status — but is a very personal choice. Adam Foster is profiled and photographed here as part of a week-long series on being Muslim, from KCPT and the Beyond Belief project.

Society today might be suffocating with controversies, but when it comes to faith in God there is no controversy in the mind of 32-year-old Kansas City poet Adam Foster.

When asked what kind of Muslim he is, Foster, like so many American Muslims of his generation, doesn’t identify with any classification.

The kind that prays, he says.

In other words, he is an American Muslim — the politics, the culture, the confusion, and, like the title of one of Foster’s poems, the controversy.

“I do not like to put myself into a category,” says Foster. “I do not claim to be associated with any particular mosque. I just need a place to pray, and I am not really interested in anything else that’s being offered.”

Foster says the old adage that we make plans but God is the ultimate planner is not just a cliché, but a principle that has given him true inner peace.

So when Foster’s 3-year-old son was diagnosed last year with Leukemia, he says, “I just surrendered matters into God’s hands.”

The diagnosis came only two weeks after Foster’s 90th day working at the Ford plant, which qualified him to receive family health insurance just in time to treat his son’s illness. His son is currently in remission, with treatment expected to go for two more years. 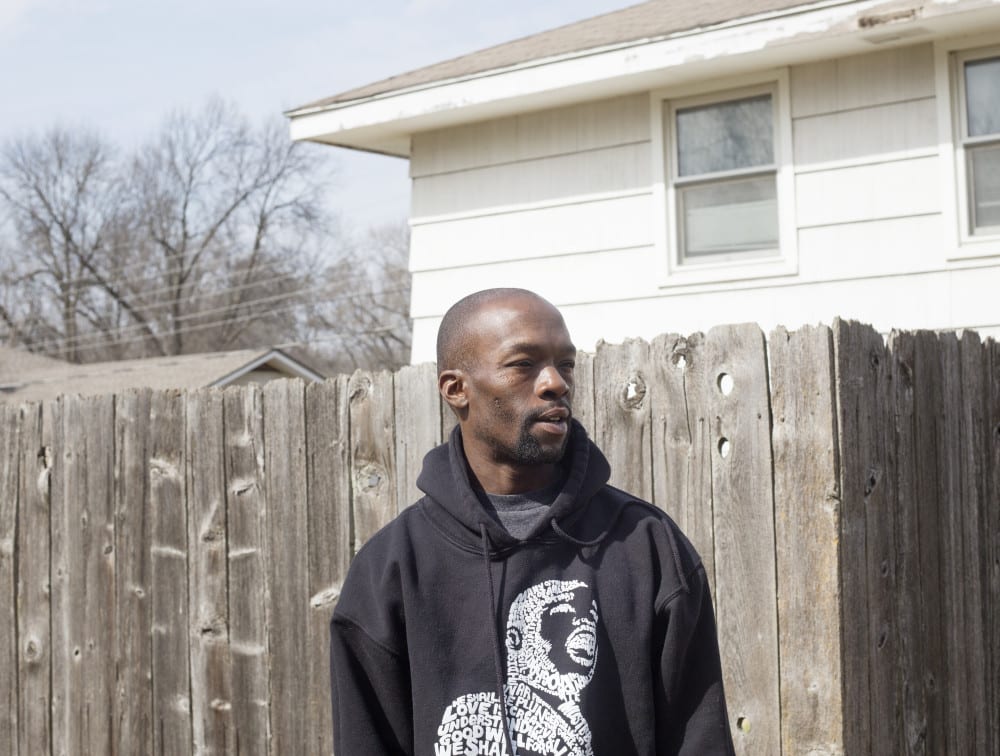 Born into a loving home to Muslim parents, Foster says he was raised in a relatively sheltered environment. His mother was an Illinois native and his father was originally from the Bahamas. At the age of three, the family temporarily moved to the Bahamas, where he was homeschooled by his mother. When it came time for high school, rather than send him to public school, his parents elected to send him to a private boarding school to join his two older brothers.

“Living on my own at the age of 13 taught me to be responsible at a very young age,” he says.

After graduating high school from a private Islamic school in the Kansas City area, Foster studied two years to become a medical assistant.

In hindsight, Foster says he wishes he had more exposure to the world outside of his close-knit Muslim community.

“I did not recognize how sheltered I was until after I left school and experienced a bit of the culture shock,” he says.

It was shortly after he graduated school and had his first encounters in the “real” world outside of his community that Foster began to engage in the kind of questioning one typically associates with spiritual journeys.

“A lot of people do not want to search for meaning. I feel if you are not searching, you are standing still and life is passing you by.”

“Everyone has their own way of deciphering religion,” he says. “Who am I tell you that you are wrong? I can’t tell someone their views are incorrect. My views may be incorrect. I asked myself, ‘Would I be Muslim if my parents were not? Would I have sought it out?’”

Foster believes that everyone has to come to a point in their lives when they need to answer these questions for themselves. After a tumultuous few years of exploring this path, Foster settled on the answer.

“I can honestly say now, that yes I would still be a Muslim. I feel that there is nothing else out there for me. I just don’t believe that any Muslim can say who is or is not destined for salvation. I don’t necessarily believe that we can know, even in the Quran — it states that.”

Foster believes that you have to do things for yourself and not get caught up with what everyone else is doing.

“A lot of people do not want to search for meaning,” says Foster. “I feel if you are not searching, you are standing still and life is passing you by.”

A poem that best encapsulates Foster’s wisdom is titled “Old Eyes.” And although he is still young, like many great poets, he has the heart to see with the eyes of his elders.

The poem reads: ‘“Through two old eyes I see, many changes from what I have known. Happiness no longer twinkles in the coolness of my eye. I cannot bear to accept the fact that time has passed me by …”

Listening to Foster read, it’s evident that this is one father, husband, son, and poet, who’s not letting life pass him by.