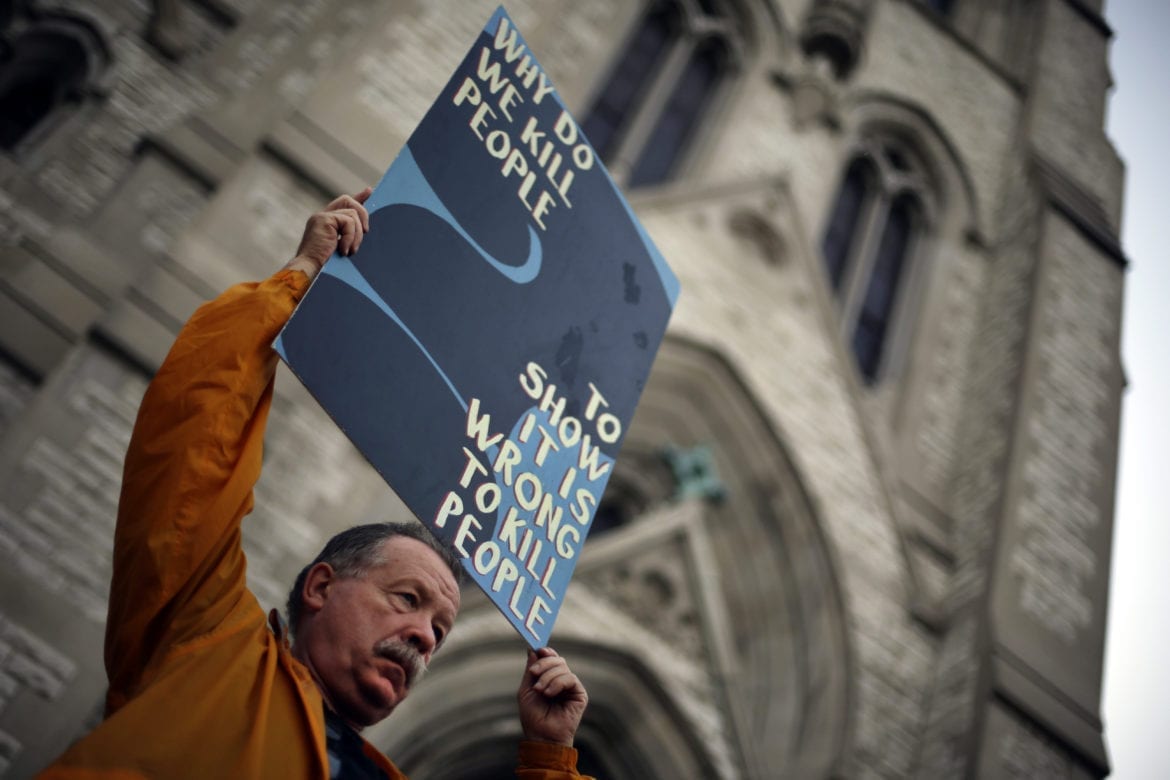 The controversy surrounding Missouri's death penalty includes opponents' calls for the state to disclose the source of its lethal injection drug. The state says confidentiality is required to ensure a continued supply of the drug. (Jeff Roberson | AP)
Share this story

Historical accounts peg Peter Johnson as the first person executed in Missouri — hanged in 1810 for killing another man in a township southwest of St. Louis.

More than two centuries later, Missouri is still meting out the death penalty. But now, the method is lethal injection, a process that is ensnaring Missouri and other states in court battles over whether it really is as humane as its proponents claim it to be.

Lethal injection has typically involved a series of three drugs injected intravenously, with the lethal drug following a sedative and a paralytic.

Spokesmen for the Missouri Department of Corrections and the Attorney General’s office declined to comment for this story.

O’Brien’s experience with Missouri’s death penalty dates back to the 1980s, not long after the U.S. Supreme Court reinstated its constitutionality. He recounted the state’s move to lethal injection. 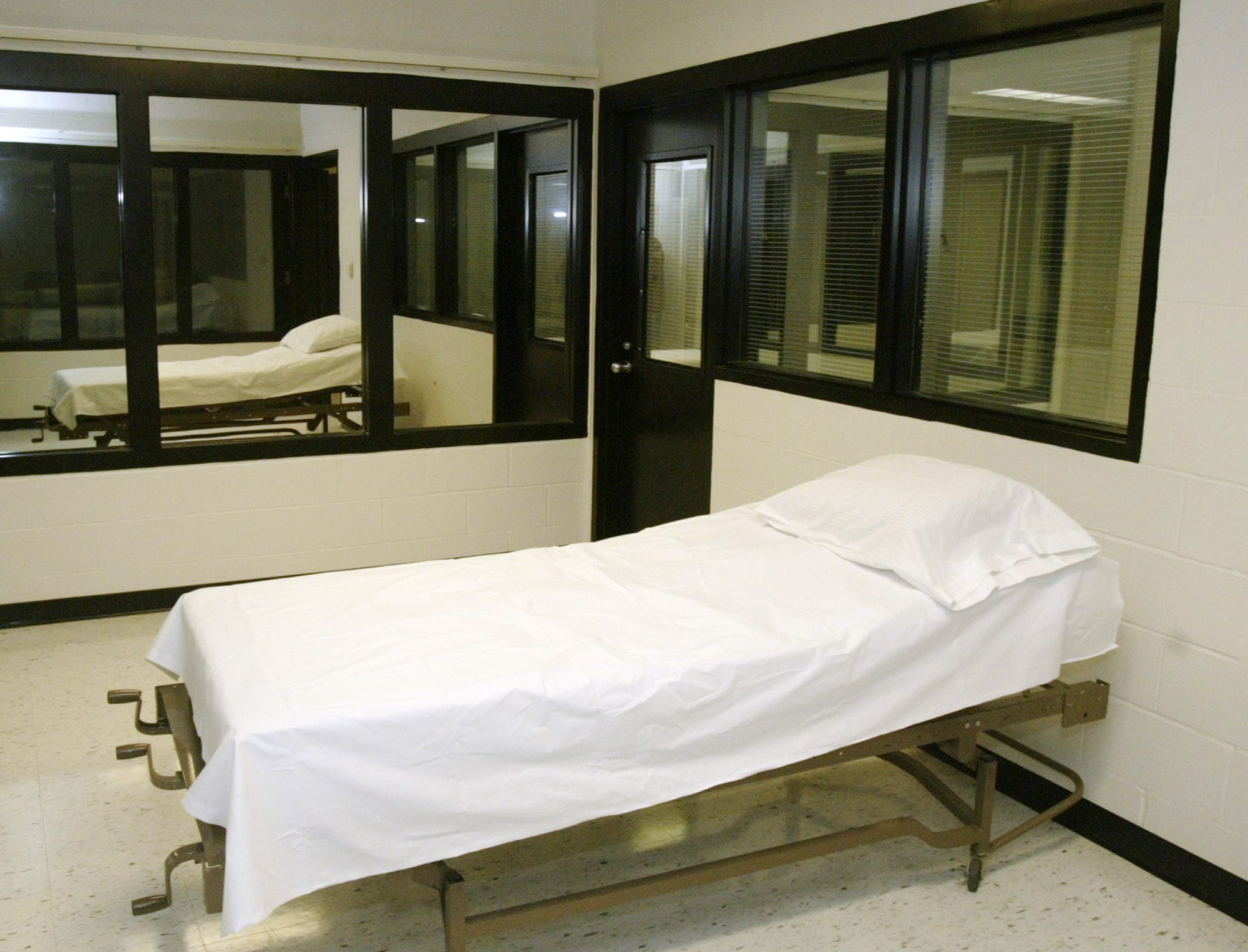 As Missouri was getting set to resume executions, O’Brien said, the attorney general ordered the warden at the state penitentiary to ready the gas chamber.

“So he bought a truckload of cyanide — I mean a ridiculous amount of cyanide — and then he set a smoke bomb off in the gas chamber,” O’Brien said. “And as it turned out, the gas chamber, which was made out of a World War I vintage submarine, leaked like a sieve, and so an execution … also would’ve been fatal to the witnesses.”

That glitch led the warden to Fred Leuchter, a Boston-based engineer, who had made a name for himself in the execution business. And that, O’Brien said, is how Missouri followed Texas to become the second state to purchase a lethal injection machine.

As it turns out, Missouri has become one of the nation’s most active executioners of the 31 states where the death penalty is legal. The Death Penalty Information Center, a Washington, D.C.-based nonprofit, says Missouri has carried out 88 death sentences in the past three decades, the last one being Mark Christeson, who was put to death Jan. 31.

The seeds of the current litigation were sown in 2011, when the European Union imposed an export ban on sodium thiopental, a key anesthetic in lethal injections. That has led states, including Missouri, to test other lethal injection methods.

Missouri has moved to a single, lethal dose of pentobarbital, an anesthetic. Yet state officials have refused to identify the source of the drug, fearing a public backlash against the supplier would cut off its supply of the drug.

That argument has prevailed in court, including a Feb. 14 decision overturning an order that the state must reveal the name of the supplier under the open-records act.

That decision, issued by the Missouri Court of Appeals for the Western District, said the Department of Corrections was within its rights to include the drug supplier as part of the execution team. And, under the state’s so-called “black hood law,” the members of the execution team are to remain confidential.

Attorneys representing Missouri death row clients have, in fact, used open-records requests for hints about the supplier, such as obtaining information on the volume of drugs the state has in stock. It is all to ensure that their clients do not suffer cruel and unusual punishment in the course of their execution.

Kansas City attorney Bernie Rhodes cheered those efforts as the person representing the media organizations seeking the identity of the supplier. He expects to appeal last month’s ruling to the Missouri Supreme Court.

In one sense, Rhodes said, the case is about dollars and cents — allowing taxpayers to know how the state is spending their money.

In addition, Rhodes argued, citizens have a right to know whether the state is using a reputable supplier when carrying out the ultimate criminal sentence in their names.

Shielding the source from public scrutiny, he argued, is incompatible with the principle of free speech.

“We are the people of the United States,” Rhodes said. “If we want to protest a supplier, and if we want to convince people not to supply drugs to the government, that is our right. That is the cost of a free society in our country.”

— Mike Sherry is Flatland’s online news editor. He can be reached via Twitter @MikeSherryKCPT, e-mail at msherry[at]kcpt.org, or phone at 816-398-4205.

Hello Atelier | Inside the House of Tula Pink

The Podcast on Working Artists Returns with Tiki, The Mouse

Hello Atelier | From Students to Teachers

A Special Double Podcast with Brandon Mably and Kaffe Fassett