A Jolt to Electric Car Drivers? 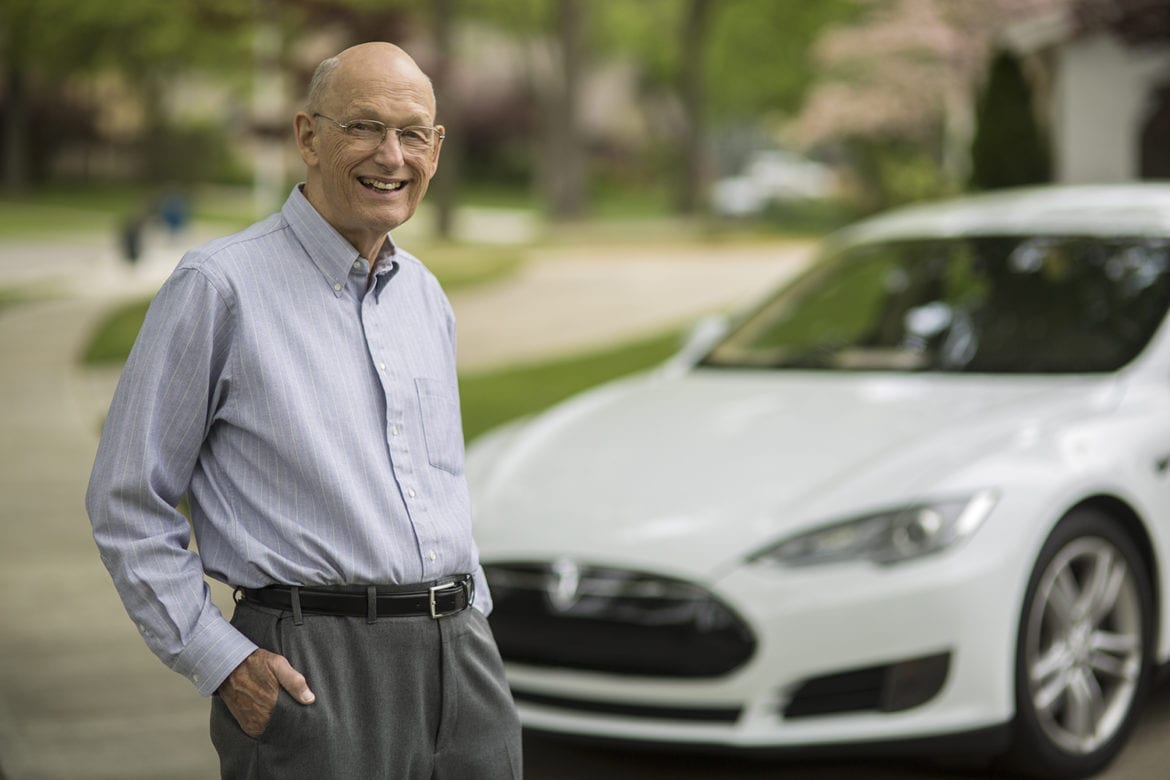 Al Pugsley, pictured here with his 2013 Tesla Model S, says an extra fee to charge electric vehicles would be "a big downer." He is president of the Mid-America Electric Auto Association in Kansas City. (Brad Austin | Flatland)
Share this story

Kansas City Power & Light could soon deliver sticker shock – along with the kilowatts – as it seeks to wring more cash from its network of charging stations for electric vehicles.

The utility is pushing for an optional  “session fee” of up to $6 per hour for time spent at one of its charging stations, in addition to the price of electricity for the service. The fee could turn what is usually a cheap fuel for vehicles into one that costs more than gasoline.

Kansas utility regulators have already approved the pricing plan, and it may be allowed in Missouri, though the utility pulled its proposal — for now — to the Missouri Public Service Commission in the face of opposition from environmental groups.

The transportation sector is one of the largest contributors to U.S. greenhouse gas emissions, according to the Environmental Protection Agency. Electric vehicles are considered more environmentally friendly especially as KCP&L and other utilities use more solar, wind and natural gas to generate electricity.

We have always felt that keeping electric vehicle charging costs less expensive than gasoline is an important part of increasing EV adoption, which is why we’ve worked with host locations to offer free charging across our network for the last three years. We expect this free charging to continue at many of our charging locations into the future, making the KC metro one of the cheapest areas to charge up in the county.

In addition, after hearing concerns from some of our host sites about the lack of vehicle rotation, we asked the Commission for the ability to allow host sites to add a session fee, which could range from $.01 to $6, to encourage drivers to move their vehicle to free up spots for others. With a very diverse group of businesses and organizations hosting charging stations, we feel it is important to have different options that can fit their parking location needs. We expect the session fee to be added to a very select few, if any, of the Clean Charge Network charging stations. For example, this session fee option is already available to our more than 250 Kansas charging spots and has never been used to date.

The session fee has sparked concerns even among supporters of KCP&L’s charging network. Al Pugsley, president of the Mid-America Electric Auto Association in Kansas City, said it smacks of something that would come from electric-car opponents in the petroleum industry.

Meanwhile, the Missouri Division of Energy calls the fee unfair to consumers. And the Sierra Club and Natural Resources Defense Council believe it could unjustifiably steer consumers away from buying electric vehicles.

“Fuel-cost savings are the single most important factor governing electric vehicle purchases, and this punitive charge would eliminate those savings,” said Noah Garcia of the Natural Resources Defense Council.

The Sierra Club initially supported the fee as a way to get needed revenue for the network, but now believes it should be dropped because of its potential for high charging prices. The Public Service Commission’s staff  recommended a fixed session fee of 66 cents per hour.

KCP&L maintains it is merely preparing for the day when there will be lines at its charging stations, when an hourly fee would encourage customers to move their vehicles as soon as the charging is completed. But it has no interest in making the charging sessions more expensive than gasoline, said company spokesman Chuck Caisley, since it also wants to boost sales of electric vehicles.

“The opposition to the session fee has been completely overblown,” he said.

The dispute comes as KCP&L grapples with some gritty questions about its charging network, dubbed the Clean Charge Network, including how to finance its ongoing expenses.

It announced plans in early 2015 to jump-start electric vehicle sales by spending $20 million to install just over 1,000 charging stations in its service territory in eastern Kansas and western  Missouri. Since then, the number of electric vehicles in the area has grown from 300 to nearly 2,000, a rate of growth KCP&L claims is the best in the country.

The boost was helped by “hosts,” such as grocery stores and college, who provided spaces for the chargers and promised to pick up the cost of electricity for two years.

Annual operating expenses, plus some other costs associated with the Clean Charge Network, add up to more than $500,000. KCP&L had hoped to spread out those costs among all its customers, not just those that drive electric vehicles, but state regulators balked at that idea.

Compounding the problem, as KCP&L acknowledges in documents filed with state regulators, is the fact that the charging network is generating minimal revenue.

“We don’t want to continue losing money on it,” said Caisley.

The price for a charging session could even vary from one Clean Charge Network location to another, based upon negotiations between KCP&L and the host, which could also decide to charge no fee.

The utility would keep all the revenue raised, but it has not specified how much that might be, and it continues to insist that the session fee would be about demand management, not for making up for financial losses.

But Caisley acknowledged that more of the network’s costs might be paid by electric vehicle drivers.

A KCP&L executive told state regulators in Kansas the network could support 13,000 electric vehicles with little or no waiting, and 25,000 vehicles with moderate waiting.

By the end of 2016, according to a KCP&L chart given regulators, the network was providing about 7,500 monthly charging sessions. That’s only enough business for each of its 864 stations to serve on average two vehicles per week.

“No demonstration has been made that there is a need for a session fee,” said Martin Hyman, a planner for the Missouri Division of Energy.

KCP&L isn’t the only Missouri utility that thinks wait times could be a problem.

The St. Louis utility Ameren sought approval from the Public Service Commission to place some chargers along part of Interstate 70. The utility would rely on chargers that would be faster models than most of the ones KCP&L is using.

Ameren is proposed a time-based fee that includes the price of electricity and is calculated to be competitive to gasoline. But the fee would continue to apply after charging, if the vehicle isn’t disconnected from the charging station.

So where do things stand with the Clean Charge Network and its session fee?

The Kansas Corporation Commission rejected KCP&L’s request to include the cost of the charging network in rates paid by all of its customers.

But it approved the session fee at the urging of the commission’s staff. They argued a higher price for a charge instead of getting it for free would be a better way to judge demand for electric vehicles in the area. So far, none of KCP&L’s charging stations in have  a session fee.

The Missouri Public Service Commission in early March gathered  around a conference table in Jefferson City to discuss how to treat electric vehicles. A majority said they were willing to make the charging stations unregulated, which would mean, if formally approved, the price for charging a vehicle wouldn’t need approval.

In late April, they voted to make Ameren’s charging stations unregulated if they are installed.

The timetable for a decision on KCP&L’s network is unclear, but the outcome of a yes vote is not, as summed up by Commissioner William Kenney: “They (utilities) can sell it for whatever prices they want.”

—Steve Everly is a freelance journalist based in Parkville, Missouri.