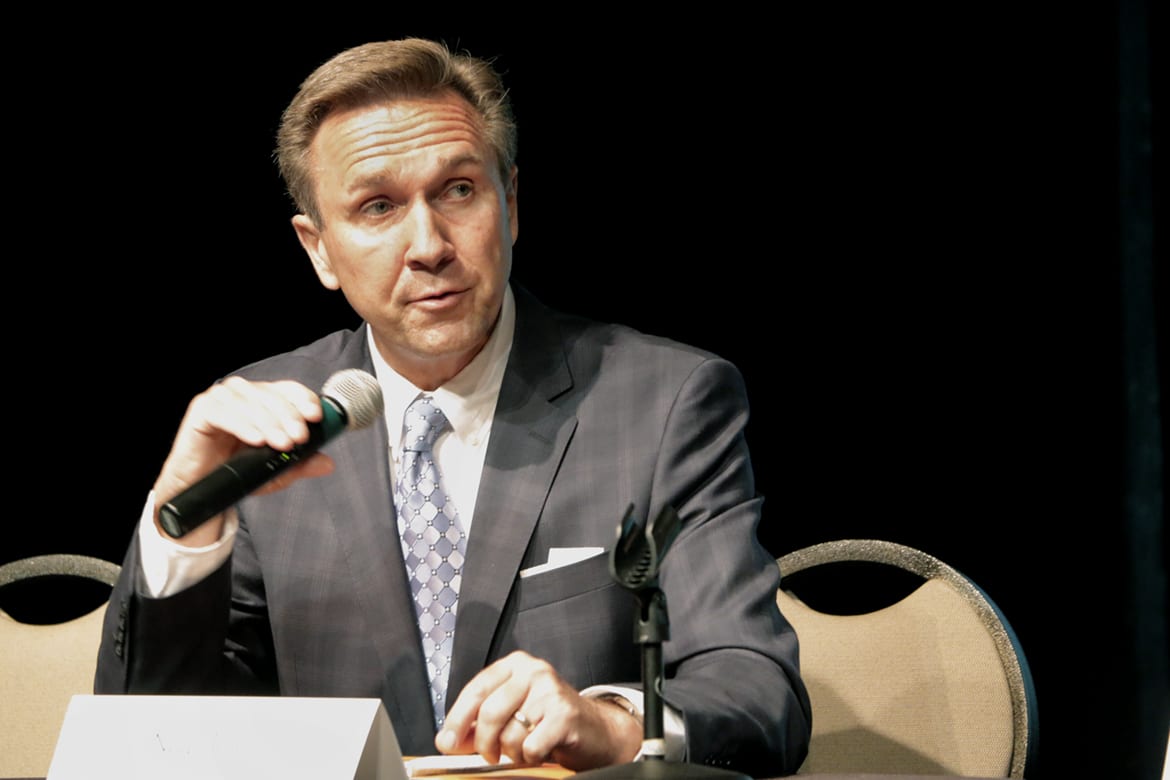 Kansas City sportscaster Neal Jones, a cancer survivor, participated in a panel discussion Wednesday evening following the screening of a documentary aimed at heightening awareness about a vaccine that can prevent certain cancers. (Photo by Mike Sherry/The Hale Center for Journalism)
Share this story

Discussions about the dangers of the human papillomavirus (HPV) tend to focus on the risks it poses for cervical cancer.

But as physicians and one local survivor emphasized in a discussion after the screening of a documentary shown Wednesday in Kansas City, HPV is not only a danger to women.

“It is under-recognized as a disease of males,” said Dr. Terance Tsue, a head and neck surgeon and physician-in-chief at the University of Kansas Cancer Center.

Though HPV is responsible for nearly all cases of cervical cancer, the virus is also a leading cause of throat cancer, which strikes men more often than women.

Wednesday’s screening of “Someone You Love: The HPV Epidemic” took place at the H&R Block City Stage at Union Station and drew about 50 people, including health officials and students.

The 90-minute documentary features the stories of five women with cervical cancer, among them Kelly Pozzoli of St. Louis.

The film documented Pozzoli’s wrenching transformation from a young newlywed determined to beat the disease to a haggard, underweight patient who died of the disease in February 2014 at age 33.

Kansas public health officials organized the screening along with a visit from Dr. Melinda Wharton, director of immunization services for the U.S. Centers for Disease Control and Prevention (CDC), who participated in the panel discussion.

Health officials in the state are trying to raise awareness about the HPV vaccine, especially given Kansas’ poor showing nationally in vaccinating adolescent females against the virus.

A study published in the current issue of Health Affairs estimates that better health coverage provided by the Affordable Care Act increases the likelihood that women between the ages of 19 and 25 will complete the HPV vaccine regimen by nearly 6 percentage points above a control group.

The study said that translated into about 854,000 young women completing the series.

Prevention makes as much sense in this arena as it does elsewhere, Wharton said.

“We don’t fasten the seat belt after we are driving the car,” she said.

HPV is the most commonly transmitted sexually transmitted disease, affecting nearly all sexually active men and women, although it does not always lead to cancer. Health officials at the screening emphasized that, despite the stigma sometimes associated with HPV, contracting the virus does not mean an individual “sleeps around.”

“It is not just people who are promiscuous,” Tsue said. “It is everyone.”

The CDC recommends that both males and females receive the HPV vaccination as part of a series of inoculations they get when they are 11 or 12 years old.

Neal Jones, a longtime sports anchor at Kansas City television station KCTV5, said HPV was not something he gave any thought to when he found a lump on his neck a couple of years ago.

He underwent a successful round of chemotherapy and radiation at the KU Cancer Center.

Although Pap smears can provide early detection for cervical cancer, there’s currently no test for men to detect oropharyngeal cancer.

Tsue said researchers are now examining a possible salivary screen. The best men can do now, he said, is to self-screen for lumps.

Tsue said his waiting room “is now filled with 20- to 55-year-old attorneys and politicians and engineers that really get hit over the head with a hammer and end up with stage four cancer” from a preventable virus.