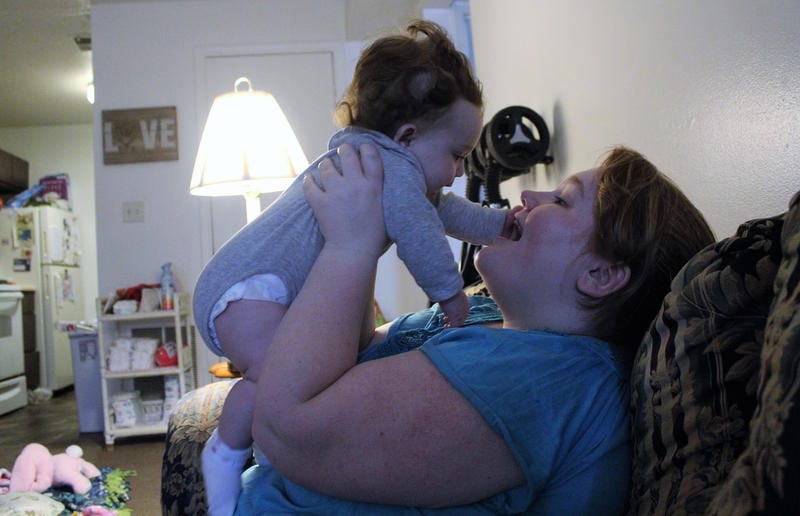 Aubri Thompson says she still struggles with transportation and affordable day care for her 6-month-old daughter, Rinleigh. She has found support through YouThrive, a program that pairs former foster care youths with families. (Meg Wingerter/Kansas News Service)
Share this story

Aubri Thompson has already had her share of challenges by age 21: She left the foster care system without a designated caregiver, lived without a steady home for more than a year and became a single parent before finishing college.

Thompson lived in the Kansas foster care system from age 14, when she was reported as a runaway, until she “aged out” at 18. During that time, she moved 21 times, staying in foster homes, group homes and mental health treatment facilities.

After turning 18, she stayed with relatives in Texas for a time but came back to Kansas in 2015 to take advantage of a state law that provides college tuition for former foster youths. She bounced between living in temporary housing for youths and staying with friends for her first year back before settling into an apartment in Overland Park, with help covering the rent from Catholic Charities.

“It was really hard to get to class when I didn’t know where I was going to live,” she said.

Editor’s note: Kansas privatized its foster care system in 1997, after a lawsuit revealed widespread problems. Twenty years later, the number of Kansas children in foster care has shot up — by a third in just the last five years — and lawmakers recently approved a task force to study the issue. The Kansas News Service is investigating problems in the system and possible solutions.

While her housing situation has stabilized and she has found a job, Thompson says she still struggles with transportation and affordable day care for her 6-month-old daughter, Rinleigh. Each of those problems affects the others, because she needs her job to save for a car, but holding down a job is difficult without reliable transportation — and a safe place to leave her daughter for the day.

“It’s a circle, that you can’t fix one piece without the others,” she said. “I think there’s a lot of people that think it’s just as simple as getting a job, and it’s not.”

The study found the foster care youths were:

Information specific to Kansas is scarce, but the Kansas Department for Children and Families estimated only 44 percent of teens who aged out of the foster care system or ran away in 2016 completed high school. Statewide, about 86 percent of students earned a high school diploma in 2015.

About 15 percent of children in the Kansas foster care system last year aged out or ran away. Most of the other children leaving the system went to some sort of permanent home, whether with their birth parents, an adoptive family or some other legal guardian, according to DCF.

The odds of finding a permanent home are much lower for teens, however. About 40 percent of those who entered the foster care system after age 12 stayed until adulthood.

Tim Gay, of Overland Park, founded YouThrive to assist teens aging out of the foster care system in Wyandotte and Johnson counties. The organization has two staff members and is funded primarily by donations.

The program pairs youths with support families, who invite them to be part of events like dinners, game nights and birthday parties, Gay said. The youths set their own goals and choose their support family, which allows them the control that most crave, he said. They currently work with about 30 youths, including Thompson, who was paired with a couple who have a baby close to her daughter’s age.

YouThrive also offers matching funds to youths who are saving money for something they need, like an apartment security deposit, Gay said. The most common goal is buying a used car, he said.

Youths who are likely to age out of the foster care system have to write plans outlining where they will live and how they will support themselves before a judge will order their release, Gay said. The plans usually run eight to 10 pages, but he said many youths don’t take them seriously.

“It’s an exercise to get what they want, which is release,” he said. “Most of the youth we interact with, they don’t even know what their plan is.”

Youths, and even adults, often aren’t aware of the resources available when they leave the foster care system, and paperwork hurdles can interfere with getting the benefits available to them, Thompson said. For example, she lost food assistance for a time because of a missing form and had to track down options for housing help on her own, she said.

Foster care youths who succeed as adults tend to have involved foster parents who want to help them with the transition, Gay said. YouThrive is too new to have data showing whether participants have better outcomes than others.

All teenagers struggle at times to think through their decisions, Gay said, but most have a parent or other adult to guide them. Some foster youths have even more challenges because they resent the system controlling their choices and shun other forms of structure, he said.

“By the time they’re released from foster care … they would say … ‘I will sleep on the streets before I let anyone tell me what to do,’” he said.

Few foster homes want to take teens, Gay said, so they’re more likely than younger kids to move frequently or stay in a group home. Each upheaval produces trauma, and many times it also disrupts their educational progress, he said.

While groups like YouThrive can make a difference for some foster children, Gay said improving outcomes for youths will require some changes to the foster care system. He said the state needs to make major investments to keep caseworkers, who are often overworked, and to support foster families raising children with challenging behaviors or conditions, so children don’t have the trauma of bouncing from home to home.

“We’re still not getting that far upstream,” he said. “I believe, if you did that over time, you would see payback.”

Thompson said she hopes eventually to help other youths aging out of foster care by setting up a nonprofit that would introduce them to theater and other arts. Before that, she plans to transfer from Kansas City Kansas Community College to Wichita State University to finish her degree in marketing and build a stable life for herself and her daughter.

While she will “graduate” from the YouThrive program when she leaves for Wichita, Thompson said she hopes to stay in contact with her support family while also strengthening connections with her relatives.

“I have somebody to call that’s not necessarily going to support my decision, but help me roll with the punches that come after,” she said.

Meg Wingerter is a reporter for the Kansas News Service, a collaboration of KCUR, Kansas Public Radio and KMUW covering health, education and politics. For more stories on health and other topics, go to kcur.org.