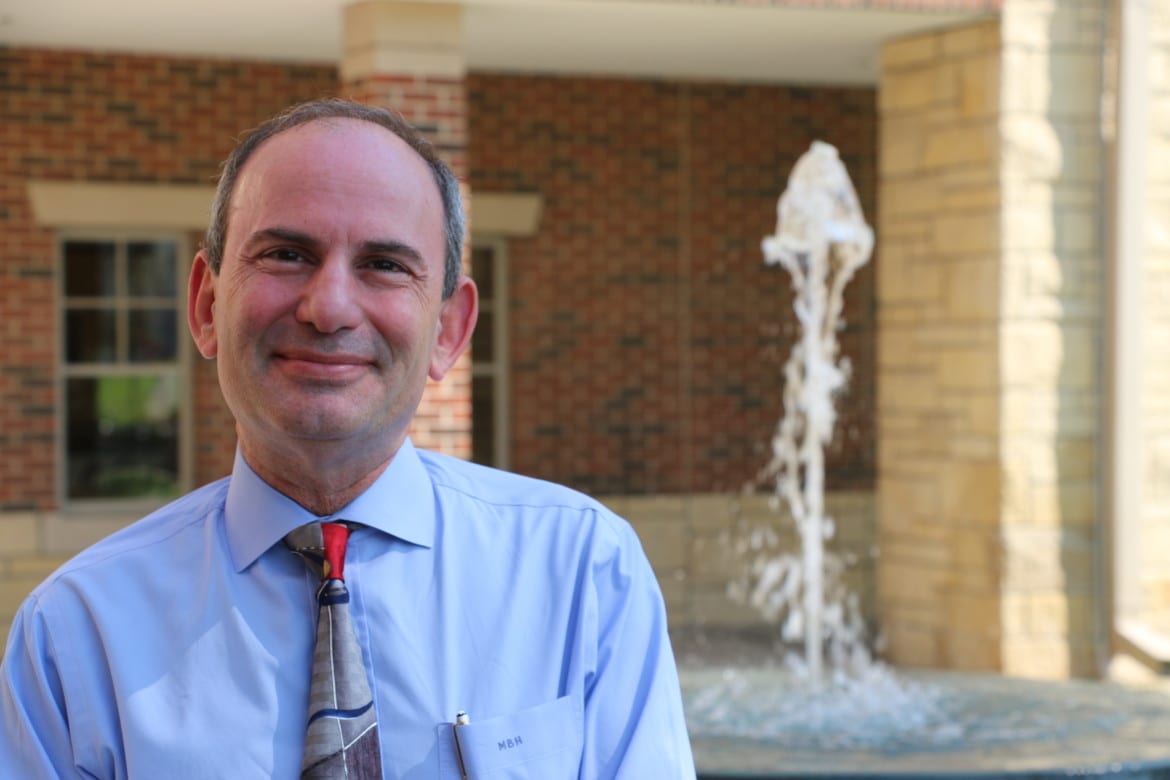 Dr. Marc Hahn, president of the Kansas City University of Medicine and Biosciences, is pictured here on the university's longtime campus on Independence Avenue. Come 2017, the university plans to have a second campus in Joplin, Missouri. (Photo: Mike Sherry | Flatland).
Share this story

The Kansas City University of Medicine and Biosciences is nearing a milestone in its march toward opening Missouri’s first new medical school in four decades, with a fundraising campaign for its Joplin campus now entering the home stretch.

The Joplin-area committee running the campaign has commitments for more than 80 percent of the $30 million it pledged for the medical school, and the leader of the campaign says it’s on track to complete the task by the end of the year.

“The reception has been very good,” said Rudy Farber, chairman of Community Bank & Trust, which is based in Neosho, Missouri. “People have been very open. They really do understand the importance of this branch of (the university).”

The funds will cover the operating expenses of the Joplin campus for its first three years. The school is scheduled to open in 2017 with a class of 150 students.

Farber said some of the money will also help renovate the medical school facility, which previously served as a temporary hospital for St. John’s Regional Medical Center (now known as Mercy) after it was destroyed by the 2011 Joplin tornado. Mercy is donating the building and the surrounding land to the university.

The Joplin campus, however, is about much more than bricks and mortar for the university, which is based in Kansas City and this year adopted the shortened acronym of KCU.

Starting a program from scratch, university officials said, will allow for implementation of a 21st-century osteopathic medical school curriculum.

Moreover, they said, its presence in southwest Missouri will make it easier to recruit home-grown talent in a region that – like many other rural areas around the country – suffers from a lack of primary care physicians. KCU’s region includes southeast Kansas, along with portions of Oklahoma and Arkansas.

“This is going to be a unique model in Middle America to address the health and medical needs of the region,” said KCU President Dr. Marc Hahn. “We think that with our track record of producing primary care physicians, and physicians that choose to practice in rural parts of the region, this model will translate very well to Joplin.”

On the curriculum side, the Joplin campus gives KCU the opportunity to put into practice some of the ideas included in the 2013 report of the Blue Ribbon Commission for the Advancement of Osteopathic Medical Education.

Hahn co-chaired the commission, and one of its recommendations was the establishment of an educational “pathway” dictated less by the rigid system in place for the past century and more by a continuum in which students advance based on their mastery of skills. 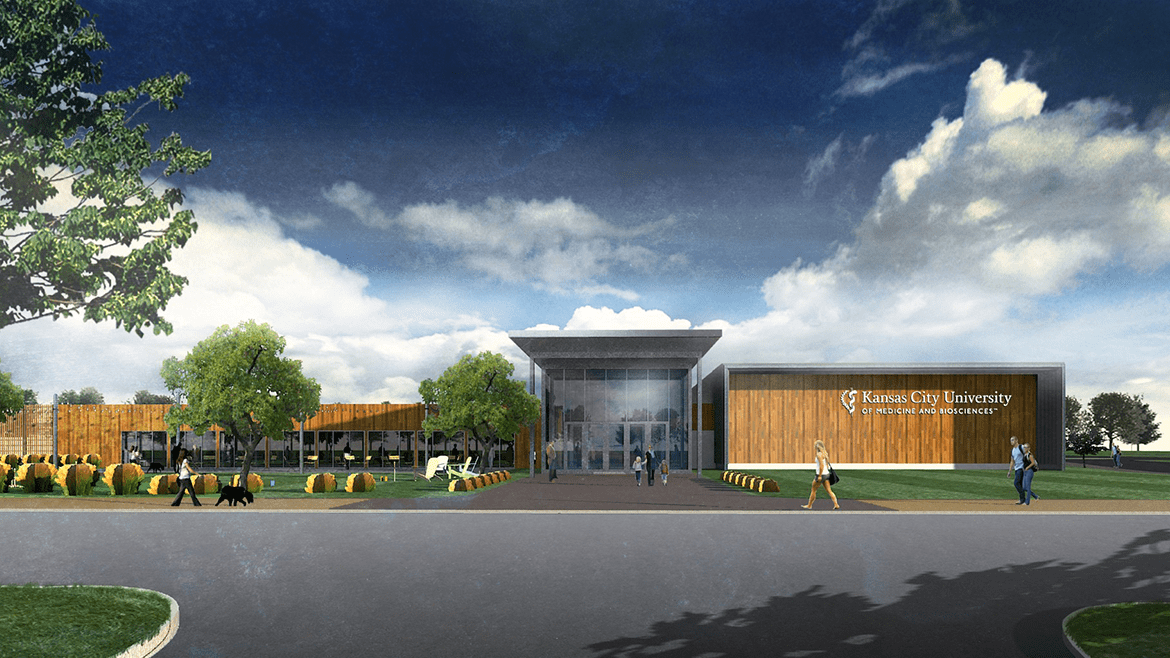 The commission suggested a system in which highly qualified students can finish in five years. That’s in contrast to traditional medical schools, which take four years before residencies and fellowships.

Why use a calendar to assess when it’s time to move on? Hahn asked

The skill set of rural doctors is much different than that of their urban counterparts, said Dr. Bruce D. Dubin, executive vice president for academic affairs and dean of the medical school on the Kansas City campus.

Duties might range from being on call for the Friday football game to providing late-night, armchair psychiatric services in the aisle of the local Walmart – or even serving as an emergency stand-in when the local veterinarian is on vacation.

“So the competencies and the need for that kind of training is much more intense, much more procedural, and it needs to be broader,” Dubin said. “That’s part of the innovation that we are looking at bringing down to the Joplin campus: training that real great, Marcus Welby-type doc, who can kind of do it all.”

KCU officials are addressing the second part of the equation – reversing the migration of doctors from rural communities – in a way not all that different from sports coaches scouring the landscape for blue-chip recruits.

By talking with mayors, superintendents and other leaders from small towns in the region, the university is recruiting high-achieving teens who have the makings of future doctors. The idea is that local recruits are much more likely to stay close to home once they hang out their shingle.

The conversation goes something like this, according to Dubin: “Jane you are entering high school. Tell you what: I’ve got a seat for you in the medical school. It is yours right now. You are going to be a doctor. It’s yours to lose or yours to keep.”

Dubin was working alongside Dr. John Dougherty, a KCU graduate who was named interim dean of the Joplin campus in August.

Dougherty, however, is leaving KCU early next year to become dean of the College of Osteopathic Medicine at Touro University Nevada (TUN), part of a university system based in New York.

A KCU spokeswoman said the university is conducting a national search for a dean of the Joplin campus.

Brian Smith knows just how a message like the one Dubin articulated would resonate with students and what it would mean for the area if they established their practices close to home.

Smith is superintendent of the school district in Galena, Kansas, just across the state line from Joplin, and a former member of the board of Community Health Center of Southeast Kansas, which serves patients based on their ability to pay.

Galena is in Cherokee County, which along with many of its neighbors ranks near the bottom of the county health rankings published annually for each state by the Robert Wood Johnson Foundation and the University of Wisconsin Population Health Institute.

Smith said having more primary care physicians in the area could encourage more residents to seek preventive care rather than waiting until they are very sick to see a doctor.

Meanwhile, he said, having a medical school next door in Joplin could attract area students, especially kids from lower-income households who might be first-generation college students. Those students typically don’t want to stray too far from home for college, Smith said.

Founded in the late 1800s in Kirksville, Missouri, osteopathic medicine focuses on wellness, health promotion and disease prevention. As such, osteopaths often specialize in primary care, with an emphasis on serving rural or underserved communities.

The thousands of HPSAs around the country are short by more than 8,000 doctors, according to figures from the Kaiser Family Foundation, with the current workforce covering only about 60 percent of the need.

Combined, Missouri and Kansas are short 429 primary care physicians, based on the data, and Missouri’s 38.6 percent of need makes it the fourth-worst in the country. Kansas’ percentage is nearly double that of Missouri.

Farber said donors have responded to the message that a medical school in Joplin will boost the health and well-being of area residents, provide an important educational opportunity for area students and serve as an economic engine with the potential to add $100 million to the local economy annually once it’s fully operational.

“I fully expect that this school will continue on,” he said, “and 100 years from now we will still have a campus in Joplin.”