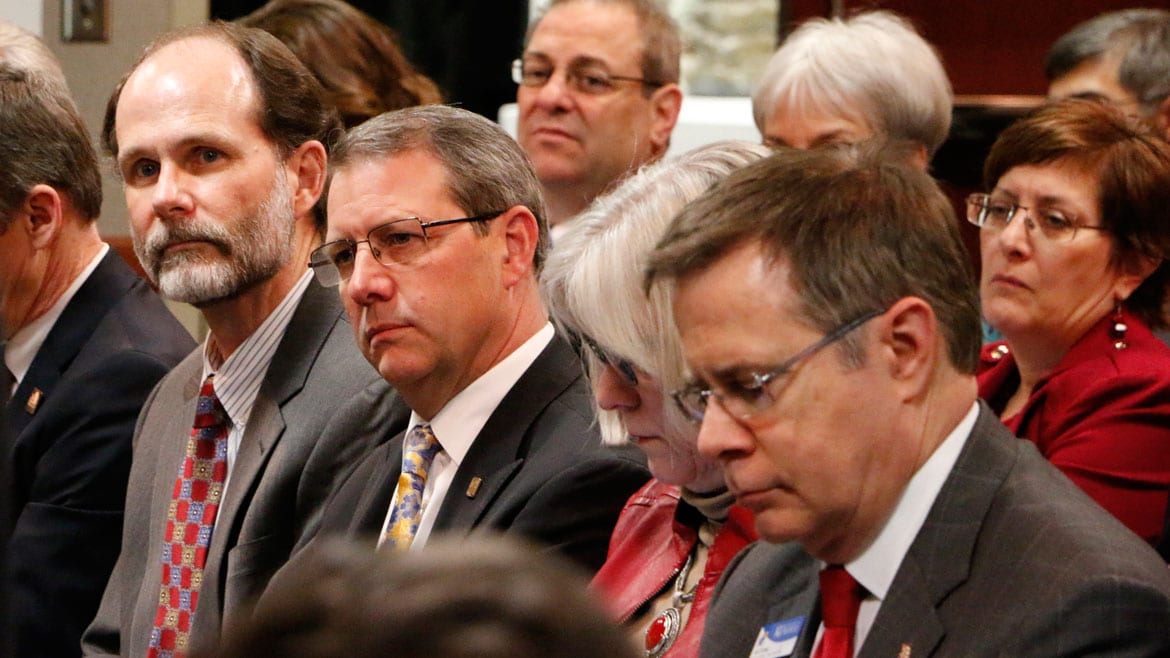 Dr. Doug Girod (third from right), executive vice chancellor of the University of Kansas Medical Center, listened in Wednesday before briefing the Kansas Board of Regents on a major initiative of the KU Cancer Center. (Photo by Mike Sherry/Hale Center for Journalism)
Share this story

The state board that oversees Kansas’ public colleges and universities on Wednesday endorsed an effort by the University of Kansas Cancer Center to earn the highest level of recognition from the National Cancer Institute (NCI).

The Kansas Board of Regents backed the initiative by approving a resolution that said, in part, that the cancer center “would substantially improve cancer research and treatment opportunities for Kansans” by earning the enhanced designation.

Though it did not endorse outright an increase in the state excise tax on cigarettes, the resolution noted the effect an increase would have on reducing smoking rates in the state and on smoking-related cancer.

Based at the University of Kansas Medical Center campus in Kansas City, Kan., the cancer center earned the first level of recognition in July 2012 – capping a nearly decade-long drive for the designation.

Backing by the state, including a $5 million annual appropriation from the Legislature, and from state higher education officials proved instrumental in earning the initial designation, Dr. Doug Girod, executive vice chancellor of KU Med, told the regents.

“It really took a village to make this happen,” Girod said, citing hundreds of millions of dollars in financial support from a number of quarters, including the University of Kansas Hospital, the Kansas Bioscience Authority and local sales tax proceeds.

The same type of commitment, including support for the resolution, would be just as crucial in the effort to earn the enhanced designation as a “comprehensive” cancer center, Girod said.

Comprehensive centers, the site says, must demonstrate “reasonable depth and breadth” across those three areas in addition to proving their ability to disseminate “clinical and public health advances” to the communities it serves.

“We know we need to be deeper and broader in everything we do,” Girod told the regents.

The cancer center service area includes all of Kansas and 10 counties in western Missouri.

Girod said there are about 26,000 new cancer diagnoses in that area every year and that nearly 11,000 people die of cancer each year within that region.

He said the cancer center has made tobacco cessation and prevention one of its main priorities in meeting the public outreach and cancer-reduction requirements of a comprehensive cancer center.

Girod said that tobacco-related illnesses cost the state about $1.1 billion each year.

Health groups, which have banded together as Kansans for a Healthy Future, have endorsed Gov. Sam Brownback’s proposal to almost triple the tobacco tax, from 79 cents to $2.29 per pack, as part of his plan to close a hole in the state budget.

Girod said that pricing is a key part of a comprehensive approach to reducing the use of tobacco products.

The resolution approved by the regents noted the health and fiscal effects of tobacco usage in the state, adding that the “most effective methods for demonstrating that the state is making an impact on public health and reducing tobacco use and cancer occurrence is to combine an expanded smoking cessation and prevention program and an increase in the tobacco excise tax.”

According to the resolution, Kansas ranks No. 36  in the country when it comes to its tobacco tax.

The wording on the tobacco tax unsettled regent Zoe Newton of Sedan, the lone dissenter in the voice vote to approve the resolution.

“I’m very proud of the cancer center and support what they are doing,” she said afterward. “But as a matter of principle, when it comes to taxation, the language just made me very uncomfortable.”