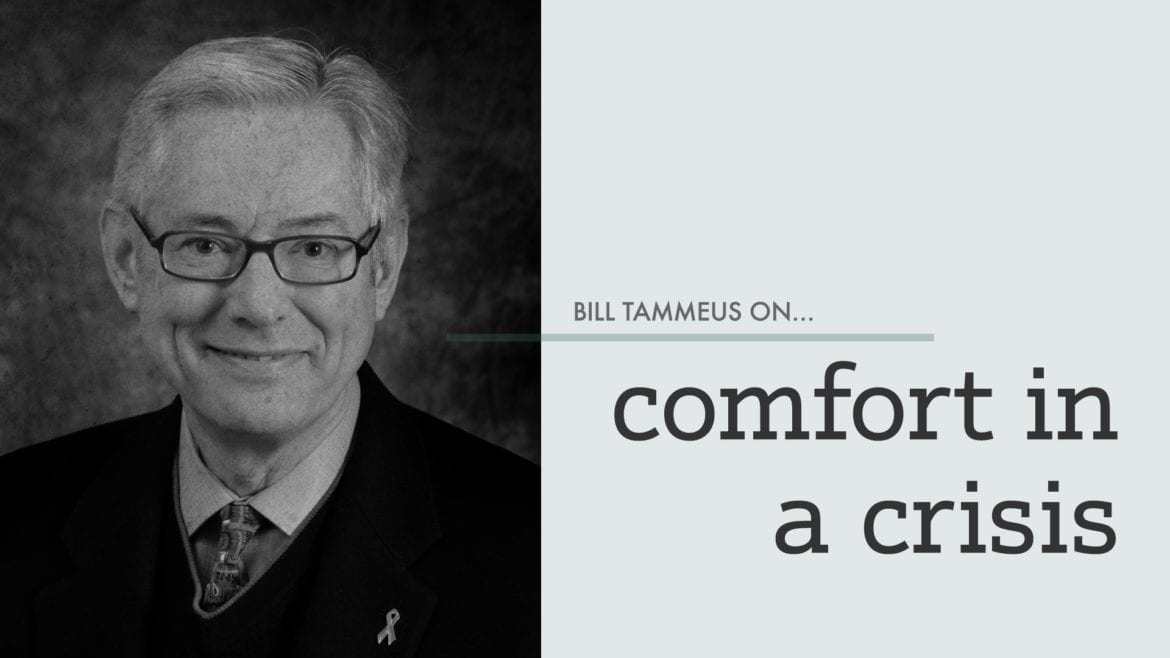 Right from birth, this baby was sick, in trouble.

“Her mother immediately asked for prayer and was very optimistic,” Kathie Knehans, then a chaplain at Children’s Mercy Hospital  told me. So Knehans prayed with the family. And even when no family members were present, Knehans, now retired, visited the child and prayed.

When the still-hospitalized infant reached 9 months old, it was clear she wouldn’t recover. So hours before she died, the parents asked Knehans to arrange to take the little girl outside, where she’d never been.

“A doctor, a nurse, a respiratory therapist, a chaplain and many other hospital staff and family and friends made up the parade that went to the playground on the hospital front lawn,” Knehans said. “There was no ceremony, no one spoke to the group. Just a quiet time of celebration and thanksgiving for the life of this child.”

Like chaplains all over greater Kansas City, Knehans was finding ways to comfort families in crisis.

“For chaplains,” says Dane Sommer, director of Mercy’s Department of Spiritual Services, “there’s that tension of bringing religion into an organization that might not have religion or spirituality as part of its mission.”

Here and around the country there are chaplains in hospitals, hospices, industries, the military, police departments (the Kansas City Police Department lists eight chaplains it uses), mental health units, prisons, even race tracks.

Kathie Knehans, recently retired as a chaplain at Children's Mercy Hospital, pictured in the chapel of the church she attends, Second Presbyterian. (Bill Tammeus | Flatland)

Once he was ministering to an atheist who, ironically enough, “just adored having me in there,” he said. One day the atheist asked Howard to pray for him: “I said, ‘I’ll be glad to pray for you. But why do you want me to pray for you?’” The man just said, “Do your faith.” So that’s what Howard did.

Chaplains come from many faith traditions. Knehans is a Presbyterian pastor, Sommer is ordained in the United Church of Christ, Carmer in the Community of Christ (formerly the Reorganized Church of Latter-day Saints) and Howard in the Church of the Nazarene. But there also are Jewish, Buddhist, Catholic and other chaplains trained to meet almost any spiritual need of the people they serve.

“To be a board-certified chaplain,” says Sommer, “you have to either be ordained or licensed by a faith group and have what we would call ecclesiastical endorsement.”

The national Board of Chaplaincy Certification, an affiliate of the Association of Professional Chaplains, sets the standards for credentials. Not too many years ago, almost anyone could serve as a chaplain at a hospital or other institution, but now the rules are tighter.

Which means, says Sommer, that the job of chaplains is not social work or medical healing. Rather, it’s rooted in theology: “Our nomenclature for being able to interpret what we do here is the language of theology. We’re here to talk about the things that are spiritual or sacred.”

And that often puts chaplains in the center of family crises. Some find that emotionally draining. Others find it stimulating.

“When I first started as a resident (chaplain at Truman),” says Howard, “I found out I was an adrenaline junkie. I love helping people in trauma situations. And I see a lot of trauma still.”

But often the crisis has to do with death and being present when family members say farewell to a loved one.

Once Sommer was in a hospital room with a Hindu family watching as a child was dying. They were, he said, performing Hindu rituals related to death but they said to Sommer: “We want you to come and say your (Christian) prayers here.” So he did.

“Chaplains,” he says, “probably have a broader perspective and a broader engagement with issues of faith outside of our own personal tradition” than other kinds of clergy.

In fact, chaplaincy work is both ecumenical (Catholics serving Methodists) and interfaith (Protestants serving Muslims). Which has the advantage of stretching chaplains intellectually and spiritually.

Sometimes Carmer of K.C. Hospice runs into a family worried about the eternal destiny of the person dying: “They’ll say, ‘I’m really afraid that I’ll never see him again because I’ve been saved and he hasn’t been.’ That is the most painful situation that I have seen.” In such cases, Carmer simply invites them to talk about the life of the person dying.

Which is what chaplains do: They create a space in which spiritual healing and reconciliation can happen, and the world is more peaceful because of it.

— Bill Tammeus, a Presbyterian elder and former award-winning Faith columnist for The Kansas City Star, writes the daily “Faith Matters” blog for The Star’s website and columns for The Presbyterian Outlook and The National Catholic Reporter. His latest book is The Value of Doubt: Why Unanswered Questions, Not Unquestioned Answers, Build Faith. Email him at wtammeus@gmail.com.