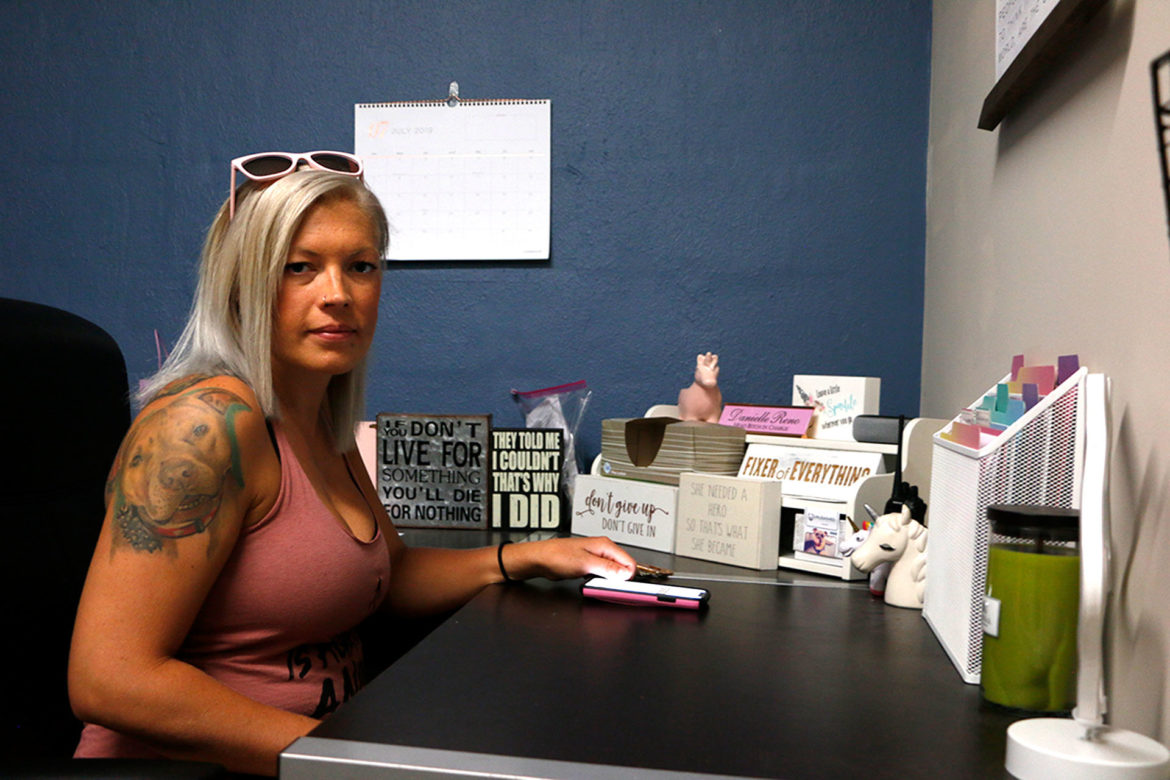 Danielle Reno, of Mission, Kansas, worked with friends to steal her car back from the thieves that stole it from her in Kansas City, North, (Jacob Douglas | Flatland)
Share this story

First, the stomach sinks. Then, the dread sets in. Sure enough, thieves have made off with your car.

Most victims would report the theft to the police and hope for the best. But that’s not the way Danielle Reno rolls.

When the Mission, Kansas, woman’s car was stolen from a QuikTrip near North Oak Trafficway and Northwest 96th Street last week, she did file a police report.

But then she took matters into her own hands — prompting a roughly 48-hour sleuthing job that would make Magnum, P.I. proud. Her episode even came with a disgusting plot twist at the end.

“It makes me irate when somebody does something wrong to another person that didn’t do anything to them,” Reno said.

It all started about 9:20 p.m. July 9, when she stopped at the QuikTrip. She was only going to pop in for a few seconds, so she left her 2011 Toyota 4Runner unlocked and running.

Reno’s first break in the case came when surveillance video from the store showed a woman and two accomplices sneaking into the car. Little did Reno know that it was actually good fortune that her wallet and cell phone were in the stolen SUV.

Reno tracked the thieves through their purchases on her credit card and through pings from an app on her cell phone.

Break No. 2 in the case actually came from Reno’s professional experience as the owner of Unleashed Pet Rescue in Mission.

As it turned out, the credit charges were coming from Gladstone, Independence and Kansas City, North.

Hot on the thieves’ trail, she tracked them to a gas station in Gladstone. Break No. 3 came when a clerk at the station had overheard the group in Reno’s car talking about going to an Applebee’s restaurant.

This is when the investigation turned from electronic surveillance to good, old-fashioned gumshoe work. Reno and her friends staked out every Applebee’s they knew of in the area.

And it was Reno herself who hit the jackpot at a Gladstone location. In walked the woman Reno had seen on the QuikTrip surveillance tape.

Heart racing, Reno went to the parking lot with her spare key. And just like that, Reno had her car back. She documented her victory by streaming her exit on Facebook.

Since then, viewers have watched the video hundreds of thousands of times on social media.

“People like to see people get justice,” Reno said. “Somebody did something wrong, and now they’re paying for it.”

Yet the cost was steep for Reno.

The thieves, who had placed a case of beer in the back seat, also stunk up the car so badly that Reno said she can’t stand to drive it.

Gladstone police picked up three homeless people in connection with the theft. The Clay County prosecutor’s office has charged one of the suspects, Lindsey Custer, with two felonies (tampering in the first degree and receiving stolen property).

Custer told Gladstone police that she did not know the car and its contents were stolen. She said a woman who had stolen a car from her in the past gave her what turned out to be Reno’s stolen SUV.

Even with the thrill of tracking down her wayward wheels, Reno is not about to take up detective work full time. “I’ll stick to animals,” she said.

—Jacob Douglas is a summer intern at Kansas City PBS