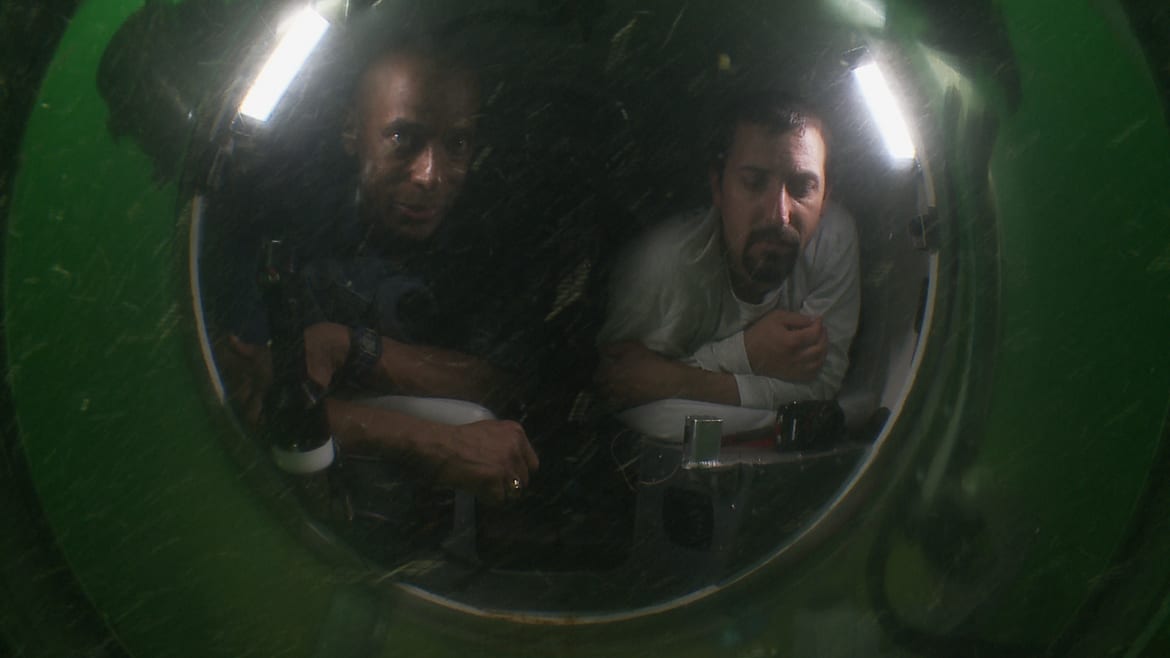 Dr. Lewis (left) said that seeing the D-Day wreckage from a submarine was one of the highlights of working with NOVA. (Image courtesy of NOVA)
Share this story

University of Kansas students and faculty will see a familiar face on PBS this spring.

KU History Professor and retired U.S. Army Major Dr. Adrian Lewis is one of the key historians in NOVA’s two-hour special “D-Day’s Sunken Secrets,” which will premiere on KCPT and other PBS stations May 28, 2014.

“Adrian had an incredibly unique perspective,” said Doug Hamilton, who wrote, produced and directed the special. “He is a historian, but also a soldier. So he could explain the strategy of military fighting to the NOVA viewers in a way that few could.”

Lewis, who has written extensively about the June 6, 1944 invasion, said that the Normandy invasion was the most important battle of the war for both the American and British sides.

His 2001 book “Omaha Beach: A Flawed Victory” examines the magnitude of the mission as well as the German defenses and geographic barriers that stacked the odds against the Allies.

“This is an excellent terrain for putting in a defense,” Lewis said in the first few minutes of the program while standing on the beaches of Normandy. “As a matter of fact, if I was doing this thing, I would rather be on the German side.”

The NOVA special will air just over a week before the 70th anniversary of D-Day and focuses, in part, on an unprecedented underwater survey of the mission’s wrecked ships.

“It’s like a graveyard: landing craft, DD tanks, you name it,” Lewis said. ‘“We were specifically looking for World War II wrecks, and when you see it on the screen — all the different spots — it’s incredible the amount of stuff that’s under the ocean there.”

Lewis said that there are hundreds of wrecked vessels from the complex invasion that was three years in the making and involved 200,000 men and 5,000 vessels.

Although Lewis has been to the beaches at Normandy several times, including visits with cadets while he was an instructor at West Point, he said that when visiting again last August to tape the NOVA special he learned something new.

“The violence of the tide — if you go to Omaha beach, wherever the tide is at the particular time, that’s what you see,” Lewis said.

“When you stay there five or six hours and watch the tide come in, and you see that it is a 20-foot difference …. What we don’t consider is how (the tide) drives people — literally. It had to drive folks up the bluff, like it or not. Talk about being between a rock and a hard place. That hard place is moving you closer and closer to that rock.”

The NOVA special also examines the engineering feats that made the largest amphibious landing in history possible.

“The technologies that you see at Normandy did not exist in 1942 when we went into North Africa,” Lewis said. “When you see the array of stuff that they’ve created to succeed at the water’s edge — that’s the thing. It’s the water’s edge. Once they’re on the shore, artillery, tanks, everything can act normally.”

While explaining the extensive planning and technology designed to deal with terrain and well-defended beaches, Lewis said that, for him, remembering those who fought is paramount.

“I was a soldier, so I want people to understand the sacrifices that people made on those beaches,” Lewis said. “That’s always number one with me, to recognize that there were lots of machines involved, but those were individual guys trying to cross those beaches under the most horrendous conditions imaginable. And they were willing to commit their lives to a particular endeavor so that we can live the way that we live.”

Several veterans also help tell the story of D-Day. For the program, they not only returned to Normandy, but also were able to survey the wreckage firsthand from two-person submarines.

For Lewis, seeing the wrecks and tanks from a submarine as well as talking with these veterans were the best part of the project.

“One of the things that’s very clear to me, and I’m glad that they did this, is that in another 50 years you won’t even know that (a tank) was a tank,” Lewis said. “It’s just going to be an encrusted mound that blends in with the bottom of the ocean.”

It’s easy to see a parallel between these deteriorating physical relics of the war and the immediate need to preserve the stories of veterans, most of whom are in their late eighties and nineties.

“I think this (anniversary) will be of greater significance because it will be the last one where you actually have live veterans there,” Lewis said.