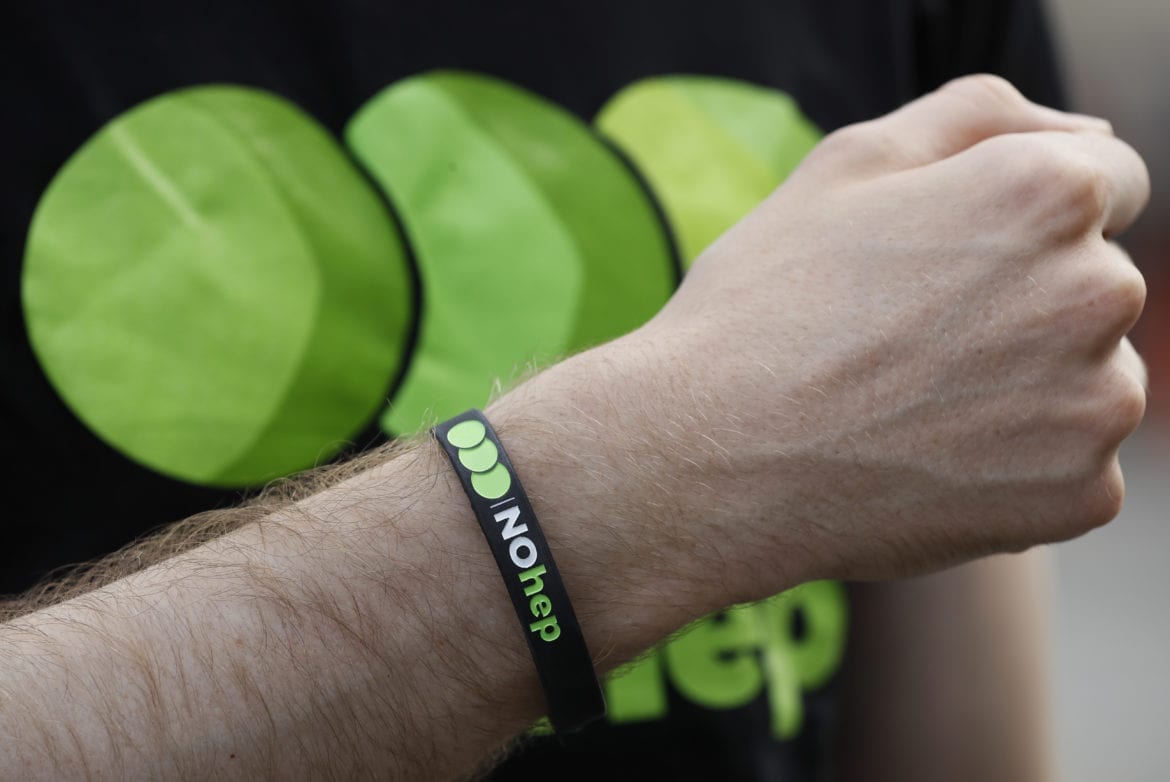 A screening for hepatitis C is one of the tests Quests Diagnostics is offering to patients without requiring referral from a physician. (Kirsty Wigglesworth | AP)
Share this story

When Amanda January was growing up in Gardner, Kansas, regular doctor’s visits weren’t a regular thing at all.

“When I was a kid we almost never went to the doctor,” January says. “I was rarely sick. My siblings were rarely sick. We just didn’t go.”

She’s now a dancer and Pilates teacher who works hard to manage her health, but she’s still skeptical about doctors.

“Some doctors might care more about paying off their student loans than their patients,” she says.

One of the country’s largest medical testing companies is trying a program that would allow patients like January – who either don’t like or can’t afford regular doctors’ visits – to make fewer of them without necessarily forsaking their health.

They’re offering medical tests without a doctor’s orders. The $64,000 question: Is skipping the doctor really a smart idea?

In the waiting room of a Quest Diagnostics lab in Kansas City, phlebotomist Kristen Weyrauch shows this reporter how to check in with an iPad.

“I encourage patients to push back.” — Dr. Michael Munger, president-elect of the American Academy of Family Physicians

About an hour earlier, I filled out an online form to get a screening for hepatitis C, and now I’m here to get my blood taken.

Quest is a giant national medical testing company, and it recently started a pilot program offering patient-ordered lab tests in Missouri and Colorado. The company introduced similar testing services in Arizona and Oklahoma in 2015.

A lot of states require a doctor’s orders for lab tests, but the laws in Missouri and Colorado are more flexible. Weyrauch says even before the program started, a lot of people would show up at the lab asking for tests – even though they weren’t offered.

“I said, ‘I’m sorry we have to have an order for a doctor. We’re not set up that way,’” Weyrauch says. “Sometimes they’re a little irritated.”

Quest introduced the pilot program in November, but so far this particular lab hasn’t seen a flood of takers. In fact, Weyrauch says I’m the first patient she’s seen.

She takes my blood, charges my credit card $59 and tells me I’ll get the results online in a week or so. If the test shows cause for concern, Quest will call directly to let me know.

It’s all very convenient, but am I missing something by not going through my family doctor? To find out, I asked one.

Dr. Michael Munger is a family physician based in Overland Park, Kansas, and president-elect of the American Academy of Family Physicians. He says many of his patients are seeking out self-testing.

It’s part of a larger trend he’s noticed: patients increasingly interested in managing their own health, researching medical issues and sometimes even questioning him. And he’s OK with that.

“I encourage patients to push back,” Munger says. “Even if I will talk to you and give you information, get an explanation. I really enjoy when they say, ‘Wait a minute, are you sure? I don’t understand that. What are you talking about?’”

But Munger says there’s a danger in patients going too rogue with their healthcare. He explains that his job is looking at a patient’s entire health history, something you can’t get from individual labs tests. And without a doctor’s expertise, the results of individual lab tests can be hard to decode.

“I always try to educate my patients that any time they go to receive any test, I want a chance to sit down and talk to them, look at the trends, put that into the overall scope of where that fits in for their health care and what those results really mean,” Munger says.

Quest says it’s not trying to put doctors out of business. The company tells patients to share results with their doctors. And the tests offered are pretty routine – none of the controversial tests that have been sold online that claim to spot rare cancers or figure out one’s genetic predisposition to certain diseases.

“Maybe they’ve been identified as being on the brink of high cholesterol or on the brink of diabetes, and they’ve taken action to alter their behaviors as it relates to exercise and diet, and they want to see if it’s making a difference,” Doherty says.

It may sound pretty harmless, but there is something big going on here, according to health economist Jane Sarasohn-Kahn. And it’s a lot more than a quick-y cholesterol screening.

Sarasohn-Kahn says we’re at the beginning stages of a big paradigm shift. New business models, phone apps and technologies like Fitbit make it cheap and easy for people to get for themselves much of what they to depend on doctors for.

She’s been talking with a lot of hospitals and doctors about this and sending out the message that, if they don’t change old ways of doing things like charging for each service they perform, they’ll be in trouble. But if they move more toward a  model of payment for patients staying healthy, then they might actually encourage patients to get into DIY health care and end up bring down overall healthcare costs.

“When we align the incentives of physicians, doctors, insurers, hospitals together  so everyone’s on the same page to benefit the patient to get well, these tools will be increasingly adopted,” Sarasohn-Kahn says.

About a week and a half after I visited the Quest lab, I checked my web results online and found out I did not have hep C. I didn’t think I did, but it was reassuring to know.

Whether this kind of medical testing takes off may take a while to find out. Tests without a doctor’s note are still not allowed in most states, so the law will have to change in most places before they’re available in the rest of the country.

Alex Smith is a health reporter for KCUR. You can reach him on Twitter @AlexSmithKCUR. More health reporting from KCUR is available here.