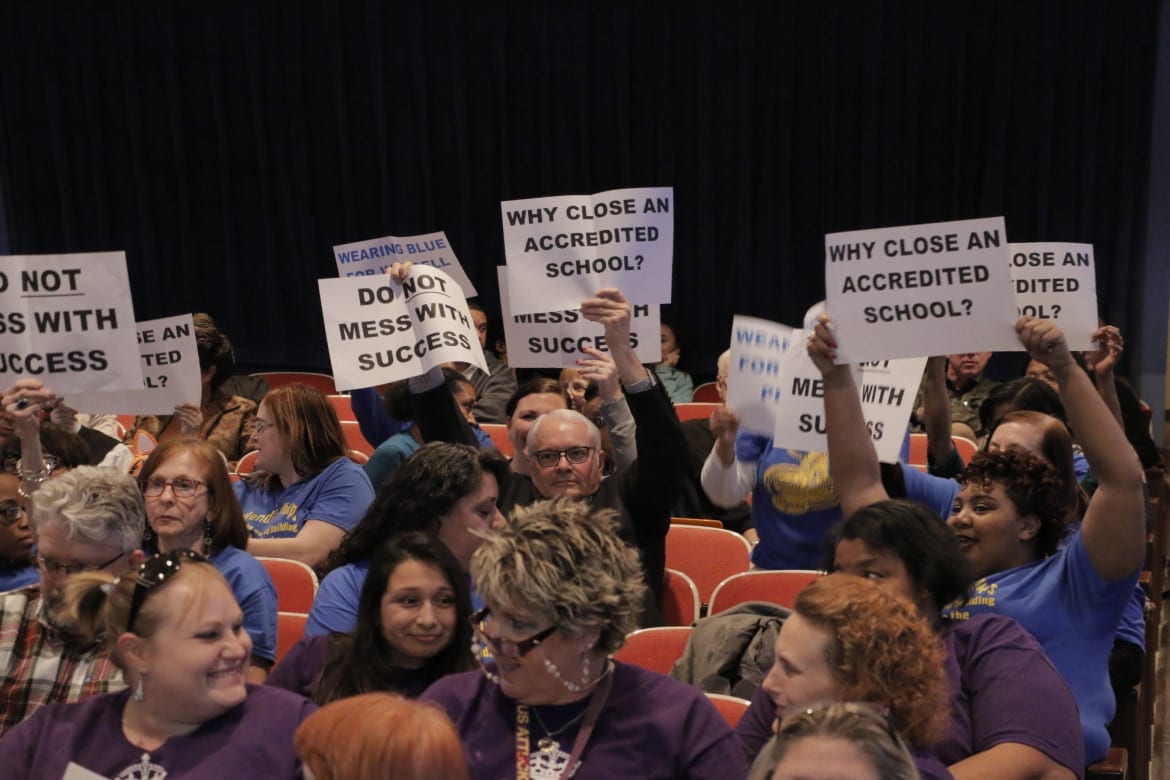 Supporters of Wendell Phillips Elementary expressed their opposition to relocating the staff and students as part of a Kansas City Public Schools master plan. The change went through, though, with school board approval of the plan Wednesday night. (Photo: Mike Sherry | Flatland)
Share this story

Under the plan, approved on a 7-2 vote, the district will convert Wendell Phillips, 1619 E. 24th Terrace, into the Kansas City Neighborhood Academy, a charter school established by the district and the Urban Neighborhood Initiative (UNI), a nonprofit aimed at revitalizing a portion of the inner city.

That takes effect in the 2016-17 school year, and the board approved the charter school agreement along with the master plan.

The plan also calls for closing Satchel Paige Elementary School, 3301 E. 75th St., at the end of this school year. Most of those students would transfer to either Hartman or Benjamin Banneker.

Overall, the master plan shifts about 2,000 students between schools, about 15 percent of the district’s enrollment.

Supporters of Attucks, Wendell Phillips and Hartman filled the board auditorium. They said any disruption in the schools would hurt the strong culture built by students, staff and parents.

“We feel you are dumping on us and setting us up for failure with your master plan,” said Karen James, who has a granddaughter in kindergarten at Hartman.

Mindy Wilson told the board how her family has fought to get their third-grader back to Attucks, where she attended kindergarten because her neighborhood school was overcrowded. Since transferring back recently, Wilson said, their daughter has flourished in Attucks’ nurturing environment.

District staff said they had considered making changes at Faxon and Longfellow as they put together their recommendations to the board, but that they kept coming back to eliminating overlap between Attucks, Wendell Phillips and Wheatley, since the schools are only blocks apart.

Board Chairman Jon Hile called his decision to support the master plan a “heart breaking vote,” given the strong backing of the schools expressed by audience members. Yet, he said, “It is certainly a decision I am comfortable making.”

Board members Amy Hartsfield and Marisol Montero cast the dissenting votes. They argued to delay action on the master plan, which has been in the works for more than two years, so that the board could further study some of the questions that have arisen.

The board voted down a proposal from Hartsfield to delay consideration of the school closures and mergers until the spring of 2017. Board supporters of the master plan, including Matthew Oates, noted the improved rigor and additional extra-curricular activities it adds in the high schools.

“We owe it to (the students) to give them that,” Oates said.

Another controversial part of the plan involves the African-Centered program at 3500 E. Meyer Blvd., which will incorporate students from Southwest Early College Campus on 6512 Wornall Road. The master plan calls for closing Southwest and designating it as a future middle school site.

The district began the master planning process in the fall of 2013 — designed to be a road map for a district struggling with decreased enrollment and poor student achievement. The proposed repurposing of Wendell Phillips Elementary School, 1619 E. 24th Terrace, proved to be one of the most controversial parts of a Kansas City Public Schools master plan. (Photo: Mike Sherry | Flatland)

Kansas City is not fully accredited by the state, and it has seen its enrollment decrease by about 60 percent over the past decade and a half to about 15,000 students.

The district’s consultant issued its report early last year, and district staff made recommendations to the board in November.

The final version of the master plan reflects revisions staff made after holding more than three dozen community meetings following the November presentation.

Staff made 13 revisions based upon those community meetings, including expanding its plan to reduce class sizes at the elementary school level. The initial proposal called only for reducing class sizes at the lowest performing schools.

The overall plan is estimated to cost approximately $8.1 million, with approximately half earmarked for additional staffing and resources needed to accommodate larger populations at the consolidated schools.

Most of the remainder is earmarked for the smaller elementary school class sizes and for transportation improvements, which include reducing the distance a student can live from a school and qualify for bus service. The plan cuts the walk boundary from 1.5 miles to half a mile.

Other changes in the master plan include additional extra-curricular activities at all levels and establishment of a “feeder system” of neighborhood schools where students stay together for their entire academic career.  Now, students that started together in elementary school might end up in two or three different high schools.

Financing of the plan comes largely from savings achieved by repurposing Wendell Phillips and closing Southwest and Satchel Paige.

Staff said they were committed to ensuring smooth implementation of the plan to minimize impacts on classroom instruction.

The district is focused on improving student achievement to gain full accreditation from the state, and the shifting of students from building to building will make that a challenge, said Vickie Murillo, chief academic and accountability officer.

— Mike Sherry can be reached at msherry@kcpt.org.