How committed is the VA to the Veterans Choice program? A U.S. senator from Kansas wants to know. 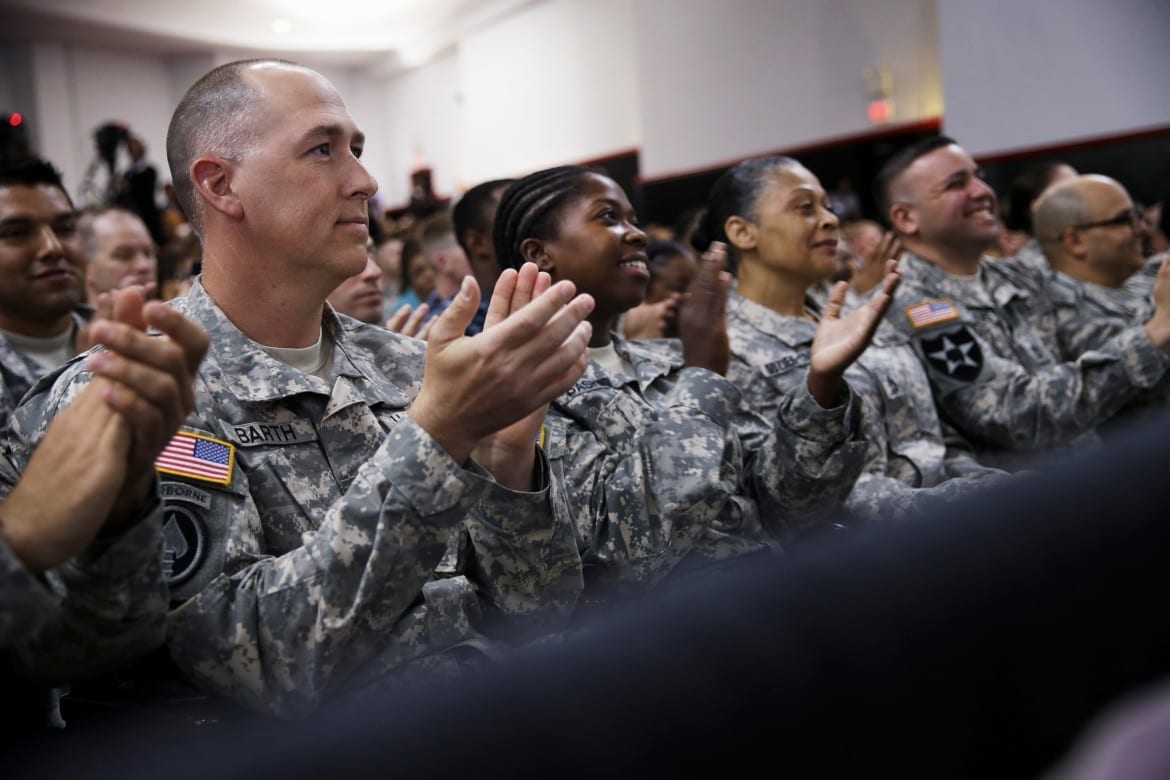 Members of the military applaud as President Barack Obama speaks about H.R. 3230, the Veterans’ Access to Care through Choice, Accountability, and Transparency Act of 2014, Thursday, Aug. 7, 2014, at the Wallace Theater in Fort Belvoir, Va. The bill gives resources to the Department of Veterans Affairs to improve access and quality of care for veterans. (AP Photo: Jacquelyn Martin)
Share this story

Millions of veterans nationwide now have a card that’s supposed to improve their access to health care. But a Kansas senator and some other members of Congress doubt the U.S. Department of Veterans Affairs is really serious about the new Veterans Choice Program.

The program is meant to let veterans get care from private providers if they live at least 40 miles from a VA health care facility or if they face a wait of more than 30 days for an appointment.

At a recent hearing, Moran told McDonald the VA seems to be putting its own welfare ahead of what’s best for veterans.

“The concern I have is that the VA has a mentality against outside care, even in the circumstances of (when veterans) can’t get care within 30 days or within 40 miles,” Moran said.

The Veterans Choice Program, launched in November, was in part a response to revelations that veterans were waiting months for VA care — and that VA officials even doctored the books to make it look as though they were meeting their targets.

Since the Veterans Choice, Access and Accountability Act of 2014 was signed into law in August, program cards have been distributed to approximately 8.5 million veterans nationwide. But according to the senators’ letter, only 0.37 percent of the recipients have been authorized to access non-VA care. The program’s rocky rollout has drawn some national media attention.

Moran told McDonald he understood the secretary had only been at the helm of the VA for a short time.

“But I will tell you the complaints that I have from veterans in Kansas about the quality of the service, the timeliness of their being seen by a physician, their ability to access care is no less today than it was a year ago,” he said.

Moran has long sought to allow veterans who live far from VA facilities to get their health care locally, from non-VA providers. He helped win passage of a pilot project, Access Received Closer to Home, that included a few sites in Kansas. The Veterans Choice Program replaced that project.

In their letter, Moran and the other senators called on McDonald to implement the program to the fullest extent possible.

“While many Veterans are satisfied with care provided through the VA Health Care System, trips to VA medical centers can be difficult for rural Veterans, especially those who are elderly or ill,” the letter said. “Because long drive times are a hardship for these individuals and can present a significant barrier to accessing care, many Veterans anticipated using their Choice Cards when Congress established the Choice Program last year,” the letter states.

Moran and the other senators said it’s not fair to measure the 40-mile distance as the crow flies rather than the actual road miles it takes to reach a VA health care facility. And veterans who live within 40 miles of any VA health care center — even one that doesn’t offer the services they need — are not allowed to use private providers for VA-funded care.

Moran expressed frustration at the inability of the VA to provide reliable cost figures for the program. He said Deputy VA Secretary Sloan Gibson told him the agency couldn’t afford to pay for non-VA care for veterans who live more than 40 miles from a VA clinic or hospital, yet the VA wants to shift funding from the program to other services.

“The suggestion that the money could be used for higher priorities within the VA is troublesome to me, because it again demonstrates the lack of interest in this program,” Moran said.

The letter from Moran and his fellow senators was blunt about this apparent contradiction.

“It is deeply disturbing that the Administration would try to reduce funding for this program before this program has even been allowed to work — being in existence for only a few short months — and as barriers to care continue to exist,” the letter states.

Moran has introduced legislation that would require the VA to use the authority Congress gave it to offer community care to veterans who are unable to receive the health care services they need from a VA medical facility within 40 miles of where they live.

“Why is the VA not bending over backwards to take care of veterans?” he asked. “By choosing to not use their authorities, the VA is forcing many rural veterans to travel hours to access care they could receive through the Choice Act in their communities — or go without care altogether.”