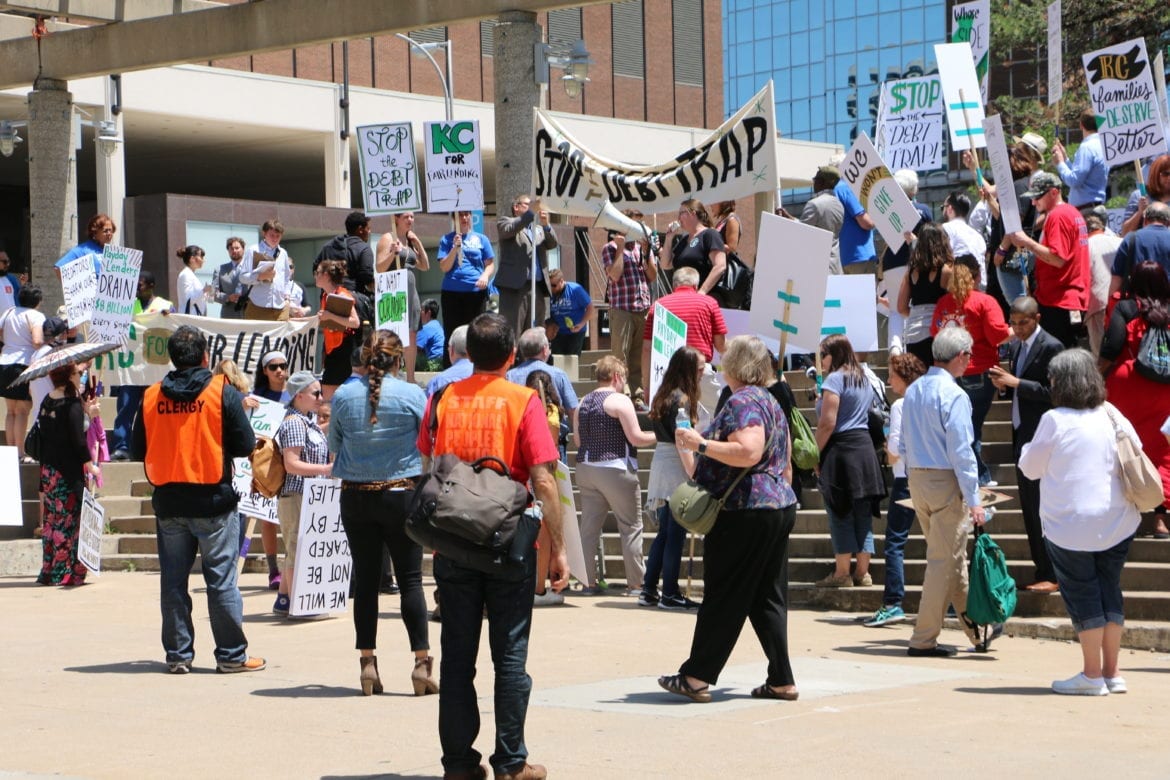 Protestors gathered at Barney Allis Plaza on 12th Street in Kansas City outside of a federal hearing to protest against the small-loan industry. (Photo: Daniel Boothe | Flatland)
Share this story

Federal regulators looking to crack down on abuses in the payday lending industry heard from both sides of the issue at a hearing Thursday in Kansas City.

“If a lender can succeed when borrowers are setup to fail, it is a telltale sign of a malfunctioning market,” said Richard Cordray, director of the Consumer Financial Protection Bureau.  ”The harm done by these lenders must be addressed.”

Thursday’s hearing, the third in an ongoing series planned by the bureau, came as the agency proposed new regulations to curb abuses in payday lending. The regulations would:

“These predatory lenders should be more strictly and closely regulated,” Kansas City Mayor Sly James said. “They are hurting families in my city and across the country. You tell me, in what context is that OK?”

Industry representatives, however, argued payday loans provide credit for consumers who have no other options.

But that’s not often an option, he said, citing research that nearly two-thirds of Americans don’t even have $500 in savings.

The proposed regulations would eliminate availability of loans of a few thousand dollars that can help with emergencies, said Bill Himpler, executive vice president of the American Financial Services Association agreed, an industry trade association.

“Millions of good customers will have nowhere else to turn,” he said.

The bureau also announced Thursday it was investigating other loan products and practices that can be considered high-risk, but which are not covered by the proposed regulations.

The bureau is taking comments on the proposed regulations until Sept. 14.

Brett Baker is the Scripps Howard Foundation winner and a Fellow at the Hale Center for Journalism, and Daniel Boothe is a reporter for KCPT. To reach Baker, email intern_hale1@kcpt.org. To reach Boothe, email dboothe@kcpt.org.