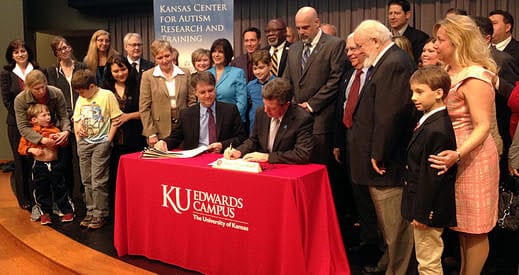 OVERLAND PARK — Gov. Sam Brownback signed into law Wednesday a measure that is expected to make insurance coverage for autism services available to about 750 children over the next two to three years.

House Bill 2744 was a compromise measure that gained eventual support from the insurance industry and advocates for autistic children and was sent to Brownback for review by the Legislature before it went home on break.

Brownback held the signing ceremony in Overland Park at the University of Kansas Edwards Campus in an event that drew some legislators, school officials and parents and advocates for autistic children.

The signing was a milestone for the advocates who had been pushing for about six years to get legislation passed.

“We’re very excited that it passed. It didn’t go as far as we hoped that it would, but we see this as a very important step forward,” said Michael Wasmer, a spokesman for the advocacy group Autism Speaks.

Wasmer said he doubted that a so-called ‘trailer bill’ meant to clarify issues having to do with licensing treatment providers and defining autism would be introduced during the Legislature’s upcoming veto session.

Wasmer said the new coverage requirements would mean about 20 percent of the autistic children currently without covered services could gain them.

“This is a step closer, but we’ve still got work to do, and we will be there fighting until all of our kids have access to the medically-necessary treatments that they need,” he said.

Effective Jan. 1, 2015, state-regulated large-group insurers will be required to cover a type of therapy known as “applied behavior analysis” for up to 25 hours a week for autistic children diagnosed between birth and age 5.

A year later, the mandate will expand to include state-regulated small-group and individual plans in place prior to the March 23, 2010 enactment of the Affordable Care Act, also known as Obamacare.

After the four years, coverage for the therapy can be limited to 10 hours per week.

Children diagnosed after age 6 would be eligible for 10 hours per week. The coverage could end when the child turns 12.

The Kansas requirements fall short of those in Missouri where insurers are required to cover –doctor-prescribed treatments for children through age 19.

Rep. John Rubin, a Shawnee Republican who led the effort to pass the bill, stood directly behind Brownback as he signed it into law.

“I am pleased to sign this bill today, expanding coverage for autism,” Brownback said. “This is an important moment for families that deal with the challenges of an autistic family member, and it’s important that we do this as a society. I hope this will help more families say, ‘Yes, we will step on forward‘, because we know we’ve got help. We’ve got support. We’ve got people, and we’ve got a compassionate society around.”

The KHI News Service is an editorially independent initiative of the Kansas Health Institute. It is supported in part by a variety of underwriters. The News Service is committed to timely, objective and in-depth coverage of health issues and the policy-making environment. All News Service stories and photos may be republished at no cost with proper attribution, including a link back to KHI.org when a story is reposted online. An automatically updated feed of headlines and more from KHI can be included on your website using the KHI widget. More about the News Service at khi.org/newsservice or contact us at (785) 233-5443.

A Quick, Clickable Roundup Of Health News From Our Region — And Beyond — For The Third Week Of September