The Biz Behind Missouri’s River Highway

Making The Case For Barges On The Missouri River

This spring, there’s new life on the Missouri River – and it’s more than buds on trees or fish in the water.

Barge traffic may be on the verge of a renaissance.

At least that’s the hope of Port KC, which reopened the Woodswether terminal in the West Bottoms last year. The facility, currently the only public port operating on the river, is receiving barges for the first time since 2007.

“I mean we feel very strongly. Our mission is to make sure that people don’t forget about this (the Missouri River,) before it’s too late,” says Richard Grenville, port operations manager for Port KC, a state agency whose commissioners are appointed by Kansas City. Port KC is investing more than $25 million in the terminal.

And while this is a promising development for barge operators, the river as a transportation solution hasn’t always been an easy sell — mostly because of droughts and floods. Richard Grenville of Port KC started his career working on boats in the ocean. Now he’s working to get more barges on the Missouri River. (Photo: Suzanne Hogan | KCUR)

“When we were having depth problems back in the late 1990s and early 2000s everybody said, ‘Oh the Missouri River — that’s it. It’s finished,'” Grenville says. “We’re trying to overcome that now, and we’re getting there.”

According to the Missouri Department of Transportation, barge traffic has been going up over the last five years. But it still falls way, way short compared to the Mississippi and Arkansas rivers.

There are 12,000 miles of navigable rivers in the country. They serve as inland highways moving barges of coal, grain, fertilizer and other bulk commodities. And the Missouri River is a part of that system — even though it doesn’t always seem like it.

From Sioux City, Iowa to St. Louis, the Missouri River has been designed by the Army Corps of Engineers to be a channel for navigation. The Corps was mandated in 1945 to install dykes and revetments parallel and perpendicular structures along the banks so that the water flow and sediment creates the channel.

Before those structure were built, the river would move if it flooded. That’s why the once-port town of Weston, Missouri, is now two miles away from the river. And why St. Joseph, Missouri’s French bottoms are on the west side of the river, surrounded by the state of Kansas.

These structures were completed in 1980, setting the course for barges on the river. From the beginning of April through November, the Corps is required to allow enough flow support (water) from the dams and reservoirs in the upper basin to support navigation.

It hasn’t always worked out. Without locks and dams to control water flow in times of droughts and floods, the Missouri has often struggled as a navigation channel, pushing a lot of shippers and towboat operators off the river.

At its peak in the 1970s, the Missouri River was moving about 2 million tons on barges.

Now it carries around half-a-million tons. (This number does not include sand and gravel, which is dredged out of the water and often kept within the Missouri River system.)

However, other factors also play into shippers’ decisions. 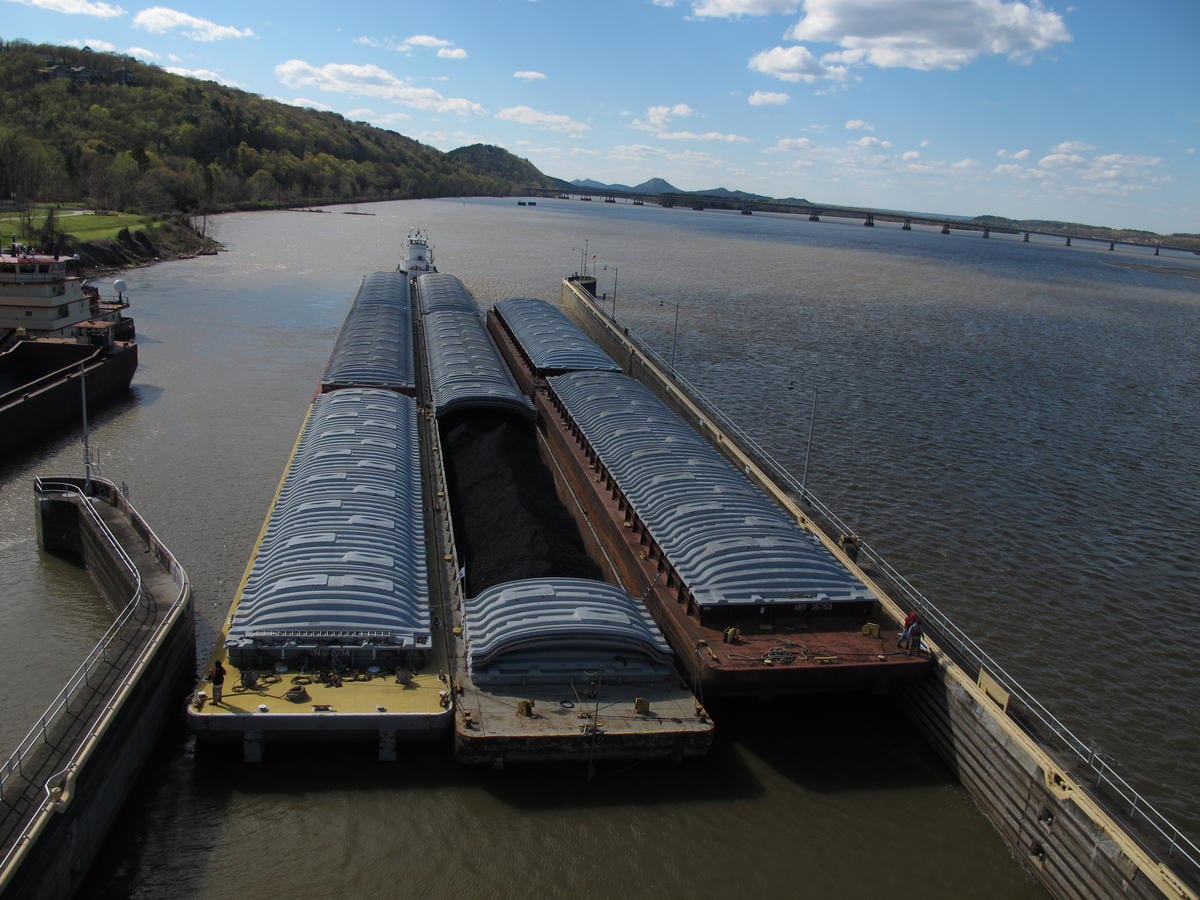 Donelan says you want to load barges with as much weight as possible. So how deep the water is can affect how much you can load down the barge. And costs go down if they can pick up and drop off freight within the same trip. On the Missouri River, everything is going to or coming from St. Louis, so moving an empty barge isn’t ideal.

These are all things Steve Engemann, of Hermann Sand and Gravel, knows a lot about. He’s among a handful of towboat operators pushing barges up and down the Missouri River. He says the Missouri River is shallower compared to other rivers, but that doesn’t stop him. This year, an unseasonably mild winter has had Engemann on the river moving fertilizer nonstop since mid-February, well before the Army Corps’ April 1 flow support day.

But he adds: “It seems like when you make a turn out of St. Louis and onto the Missouri, it’s like you’re falling off the planet. And we’re connected, very much so. We’re connected to the rest of the inland river system, and I just want to try to maintain that connection.”

This year, Port KC expects to receive and send 170,000 tons of everything from fertilizer to coal to steel byproduct and scrap metal. That’s could significantly increase the Missouri River’s total tonnage.

Also adding to the potential: St. Joseph’s public port is undergoing renovations and may start loading and unloading barges again this June.

Then there are the private ports. AGRIServices in Brunswick, Missouri, a company that started in 1978, is the busiest port operating on the river.

Lucy Fletcher, business manager for AGRIServices, says the company only had on year in which they couldn’t move goods by barge. Since mid-February the newly reopened Woodswether terminal in the West Bottoms of Kansas City has been receiving barges of fertilizer. The unseasonable winter allowed navigators to start earlier than the April 1 flow support day that the Army Corps of Engineers provides. (Photo: Suzanne Hogan | KCUR)

“If we increase traffic (with the addition of public ports), I think it’s good for everybody. And personally I think (the river) is an under-utilized resource,” Fletcher says.

Grenville, with Port KC, says he has reason to be optimistic about the Missouri River’s potential “because it comes through Kansas City. And Kansas City is such a dynamic freight hub for the nation.”

Kansas City is the second largest rail hub in the country. And the river flows into the busiest barge river in the country, the Mississippi.

The terminal is building a $3 million rail spur, to be completed next year, which Grenville believes will attract more business.

But whether all of this will be enough to actually re-establish the river as an affordable and reliable option for shipping is still to be seen. Right now water levels are good. But Mother Nature has a way of changing the plan.

Only time and the weather will tell if the Missouri River will ever be a thriving navigation channel, as it was designed to be.

Suzanne Hogan is a reporter, announcer and producer for KCUR 89.3. This story is part of a reporting collaboration between KCUR and KCPT’s Hale Center for Journalism exploring the economics behind Missouri River navigation and Port KC development. Read the second story in the series, from KCPT’s Mike McGraw, here on Flatland. Feature illustration by Coleman Stampley for Flatland.

Shaping the Future of the Missouri River

The ABCs of Port KC