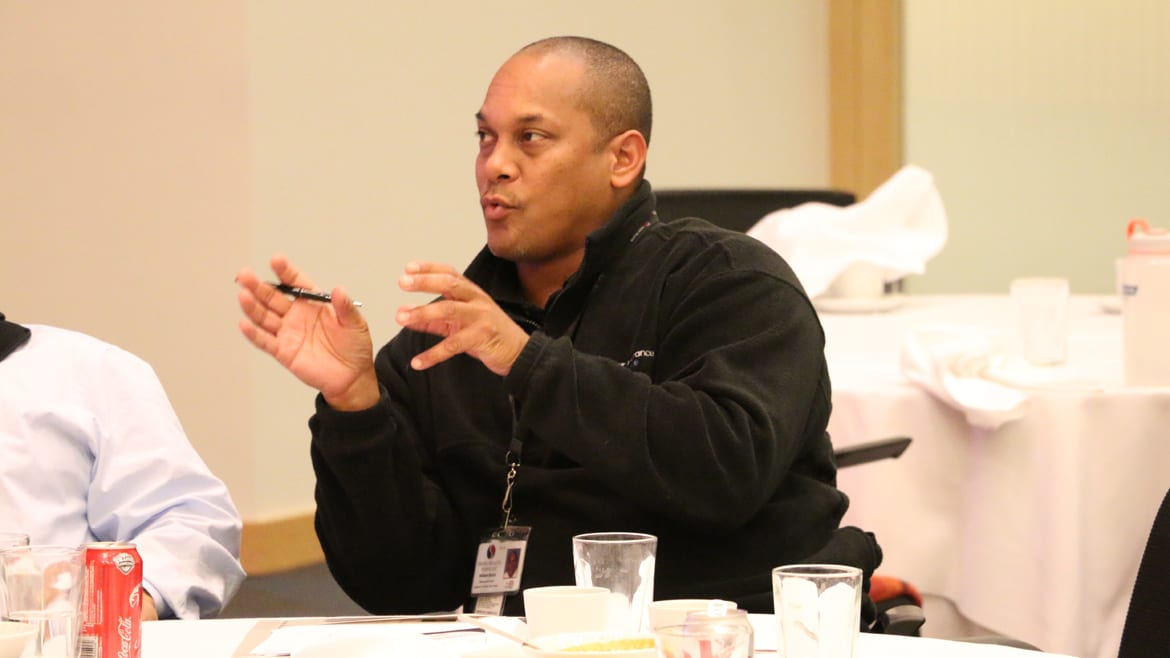 Bill Brock, an application counselor with Swope Health Services in Kansas City, Mo., made a point at a 2014 forum on insurance coverage through the federal health-reform law. (Photo: Mike Sherry | Flatland)
Share this story

A federal judge says that Obamacare navigators may dispense advice to those looking for insurance under the federal health reform law.

U.S. District Judge Ortrie Smith on Wednesday struck down provisions of a Missouri law that bars insurance navigators from giving advice about health plans. He ruled that the law is preempted by the federal Affordable Care Act.

Missouri legislators passed the law, the Health Insurance Marketplace Innovation Act (HIMIA), in 2013 at the behest of insurance agents and brokers.

—Dan Margolies is editor of Heartland Health Monitor, a reporting collaboration between KCUR, KCPT, and KHI News Service in Topeka, an editorially independent initiative of the Kansas Health Institute.

Kansas lawmakers are close to finishing work on a bill they hope will motivate doctors and dentists to provide more charity care.

Though the measure enjoys bipartisan support, its most ardent supporters are Republican legislators who are opposed to Medicaid expansion and need something that shows voters they’re willing to help poor Kansans gain access to health care.

“You can’t say ‘no’ to everything,” said Rep. Dan Hawkins, a Wichita Republican and chairman of the House Health and Human Services Committee. “If you’re going to say ‘no’ (to Medicaid expansion), then you have to try and find other solutions that can help. That’s what I’m trying to do.”

The southeastern corner of Kansas remains the state’s least healthy region, according to the rankings released Wednesday by the Robert Wood Johnson Foundation and the University of Wisconsin Population Health Institute. However, the Kansas county at the bottom of the list — Wyandotte — is next door to Johnson County, the state’s top performer.

Gianfranco Pezzino, senior fellow and strategy team leader at the Kansas Health Institute, says the big story in the annual rankings is the disparity from county to county.

“We have deep, deep differences among the poorest and the richest counties, and so as a consequence also among the healthiest and the least healthy counties,” Pezzino says.

—Bryan Thompson is a reporter for KHI News Service Nurrenbern specializes in refugee health care, and he gives many patients their first health checkup in the United States.

Many of them have fled violence or persecution, and the stress and trauma of their previous lives – plus the shock of coming to the United States – can still be palpable.

“Their blood pressure can show that they’re anxious,” Nurrenbern says. “Or during a physical exam, you realize they’re profusely sweating or kind of shaking a little bit.”

—Alex Smith is a reporter for KCUR

A rapidly expanding medical program for low-income first-time mothers combines social services with the latest in brain science. The Nurse-Family Partnership provides in-home advice on health and parenting, which can lead to improved cognitive development and language skills for their children, who are showing up to school better prepared for learning. Special correspondent Cat Wise reports.