The Iron District: Building a Community Out of Shipping Containers 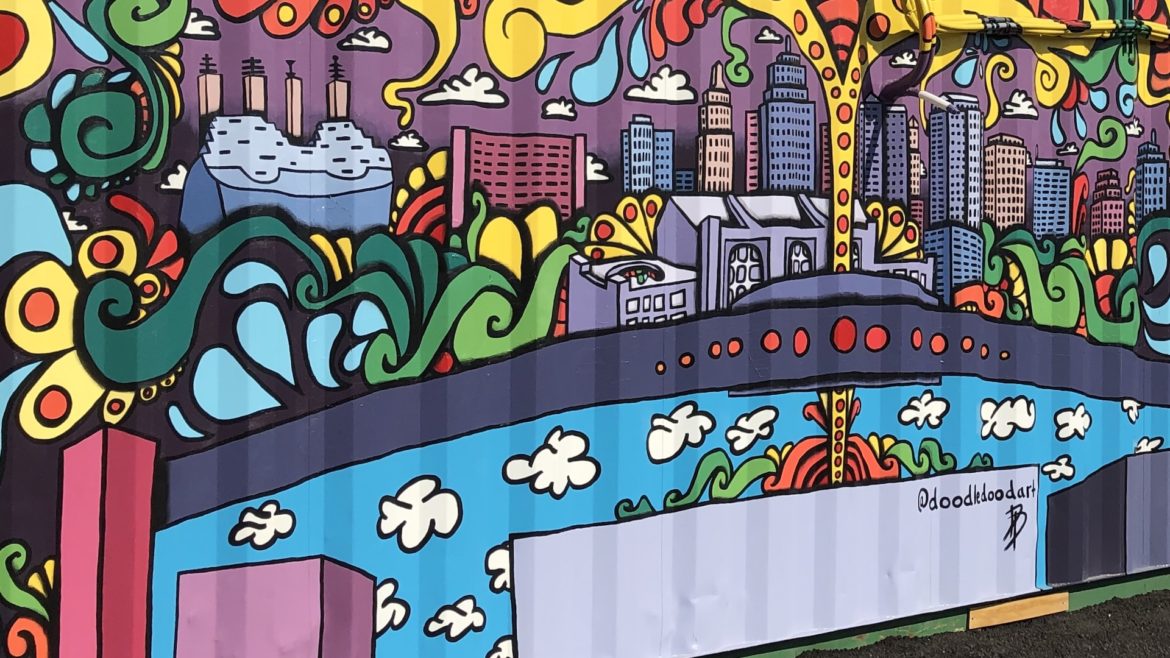 It started with a Cuban sandwich.

“I remember thinking I could do it better,” says Rachel Kennedy Cuevas, recalling the sandwich she ate with her husband at a local restaurant years ago.

Five weeks after that realization, Cuevas’ own Cuban sandwich was on wheels and she pulled away from the corporate world. Her food truck, called the Plantain District, specialized in the sandwich and quickly garnered a following. A few years later, it became time to think about what’s next.

“I just kept sketching and sketching and this is what we ended up with,” Cuevas says, sitting in the courtyard of what looks like some combination of an art installation and shipping yard.

She’s sitting at a picnic table at the center of the Iron District, North Kansas City’s newest food, retail and entertainment hub at the corner of 16th and Iron streets. It’s like a small town square surrounded by stationary shipping containers, eight of which are currently outfitted for food vendors — nine if you count the bar below the big grey corrugated “COSCO” container.

Hopping on the “tiny house” trend alone was an option for the Plantain District, but Cuevas craved creating a food truck community and saw an opportunity to cast a wider net to catch the NKC lunchtime crowd.

So when she pitched the idea to the city council and was put in contact with the empty lot’s owner Zach Taylor, who also happens to be a kitchen contractor, it wasn’t a hard sell.

“I think this is the day and age of marketing where instead of stepping on each other to make yourself look better, you reach out your hand,” Cuevas explains just a few weeks into simultaneously running the Plantain District and the Iron District. “And I come from that kind of thinking anyway, regardless. I always feel that works out better in the end.”

In addition to food options like the Plantain District, Morning Day, Avo Bite and Kind Food containers, the Iron District has rolled out a collaborative work space that is available to anyone looking for a trendy business meeting venue, in addition to retail spaces like Boheme and Lois Gutierrez’s 3 & Me Boutique.

The Iron District came right on time for Gutierrez, who moved north of the river after landlord troubles on 39th Street. Her shipping container boutique offers a range of styles in clothing and jewelry inspired by her two daughters’ closets and her own.

Cuevas, who has a background in business, food science and dietetics, made it a point to offer short-term leases to interested vendors, well aware of the challenge in getting a dream off the ground.

And sure enough, early success has inspired a handful of vendors to re-sign, as the whole operation has sights set on expansion heading into 2020, despite Mother Nature’s looming challenge.

While opening just ahead of Kansas City’s cold weather season could hurt the mostly outdoor community, space heaters have been wheeled into place as several of the vendors plan to rely on catering and delivery during the winter months.

If all goes according to plan, spring’s thaw will further reveal Cuevas’ budding vision.

Cuevas smiles while casting her gaze around the courtyard, dotted with long picnic tables.

“We made sure that they are community-minded tables instead of just individual seats, so that way people could get together and hang out, make new friends,” Cuevas says. “Any time I go somewhere, especially if the wait is long, I’ll jump on that community or family table and say hello to someone and eat next to them.”