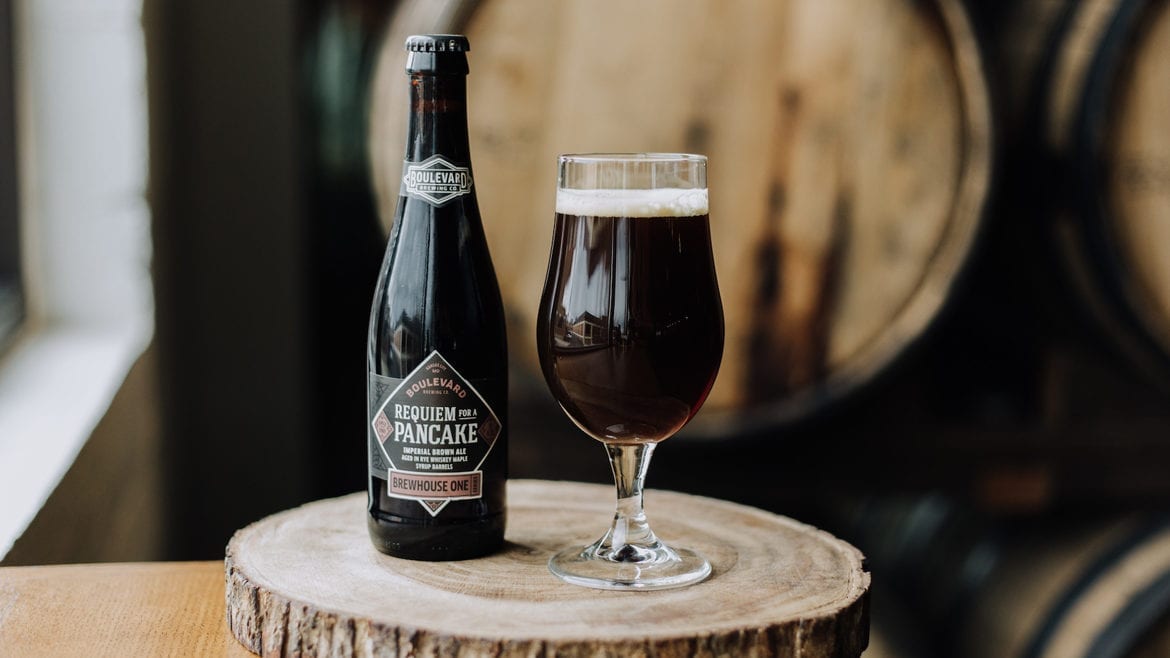 Boulevard's Requiem For A Pancake is a very different spin on breakfast. (Pete Dulin I Flatland)
Share this story

Cinder Block Brewery teamed up with Jax Fish House & Oyster Bar for the second consecutive year to create and release the Emersum Oyster Stout in time for Mardi Gras celebrations. The stout is brewed with six dozen of Jax’s proprietary and wholly sustainable Emersum Oysters, which add a natural minerality and create a rich texture to the beer.

“We updated the base malt to a Scottish Malt from Simpsons Malting called Golden Promise,” said Schaffter. “This year’s [version] has a full-bodied stout flavor leading into some mineral and salty tones with really a nice dark malt taste.”

“The Cherry Cider is produced from a base of Louisburg Cider that we get fresh, then we ferment and condition the cider,” said Schaffter. “After that it is blended with tart cherries to give it the cherry kick. The Cherry Cider has an effervescent tart apple and cherry flavor that comes across as balanced between the two fruits, enabling them to both showcase their natural flavors.”

Breakfast By The Glass

Maple syrup, rye, bourbon, and oak barrels all played a delicious role in the making of Boulevard Brewing Company’s Requiem for a Pancake. Packaged in 12-ounce bottles, this Imperial Brown Ale will be available to the public at Boulevard Brewing’s Tours & Recreation Center beginning at 10 a.m. on Wednesday, March 1, ($12 each, limit four per person).

Last year, Boulevard’s brewers and barrel-wranglers obtained a collection of eight-gallon oak barrels used to age Woodinville Whiskey Co.’s rye and bourbon before taking a turn aging rich, complex maple syrup. Boulevard brewed its boozy Imperial Brown Ale and let it take a nap in these twice-used micro-barrels before this limited-release. For every bottle sold, Boulevard will donate $1 to Guadalupe Centers, Inc.

The Big Rip Brewing Company hosts its annual Snake Saturday Parade celebration on March 11, beginning at 8 a.m. with Kegs and Pancakes before the parade. Breakfast is $5 and includes pancakes and sausage links. RSVP requested. After the parade, Hawg Jaw BBQ — a new barbecue spot next door to Big Rip at 900 Swift Avenue — will serve barbecue in the event room. Big Rip will have Irish Red Ale and The Priest Mint Chocolate Milk Stout on tap.

Tickets for Boulevardia, the urban beer, food, and music street festival hosted by the Boulevard Brewing Company, on June 16 and 17, are on sale now. The first rule about Beer Club at Hy-Vee Lee’s Summit (301 NE Rice Road) is…RSVP in store to guarantee a spot for gatherings, such as this visit from Oklahoma City’s Coop Ale Works. From 7 to 8 p.m., brewery representative Laura Heiman will share a history of the brewery, discuss some of the brewery’s offerings, and answer questions.

KC Girl’s Pint Out and ZZ Hops host a 4th Annual Girl Scout Cookie Pairing (127 W 10th Street). Craft beer from ZZ Hops homebrewers will be paired with irresistible cookies. Participants will sample up to three brews per cookie with eight cookie flavors in all. The $25 ticket includes a taster glass, 16 cookies (two each of eight flavors), up to 22 samples of ZZ Hops’ best beers, a raffle ticket, and light snacks.

Velo Garage and Tap House (1403 Swift Avenue, North Kansas City) officially opens. First launched as VeloWagon, the mobile bike repair and taproom gets a permanent home in Northtown. Visit the repair shop, try one of ten beers on tap or choose from the bottle and can selection, meet the owners, try Dez Nuts, play shuffleboard, and score swag from Velo Garage and Swift Optics.