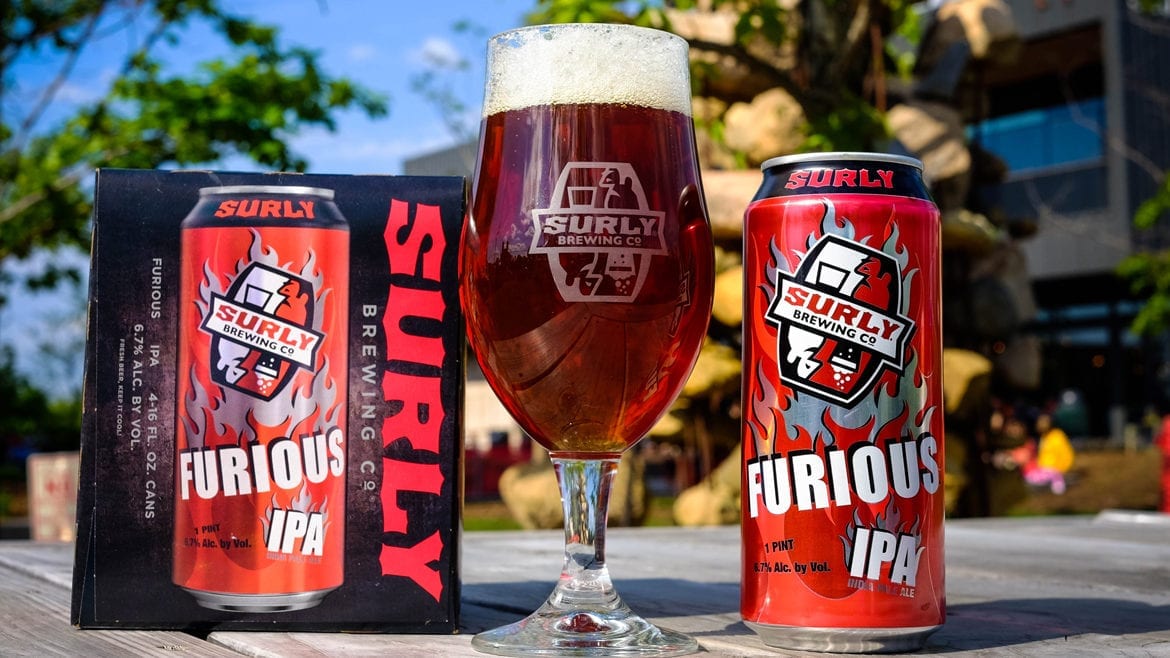 Surly Furious IPA will soon be on shelves in Missouri. (Courtesy of Surly Brewing Co.)
Share this story

Surly Brewing Company announced that it will launch distribution to Missouri in the first week of August. [Note: Surly reached out this morning with an update that the launch has been pushed back to September.] Based in Minneapolis, Minnesota, the brewery will unleash five beer brands in cans and on draft in the Show-Me State: Furious IPA, Hell German-style Munich Helles Lager, Todd the Axe Man West Coast-style IPA, Xtra-Citra Pale Ale, and a fifth style to be named later.

Missouri has long been a target for the brewery’s distribution territory.

“Whenever we’d announce a new location, we’d get flooded with comments on our social channels about coming to Missouri next,” said Surly owner Omar Ansari. “We knew they were just down the river, and we knew we had a built-in fan base.”

Since Surly began brewing in 2006, the size of the craft beer market and breweries has grown considerably, creating an abundance of choice for consumers. Despite the increased competition, Surly’s owner contends that its beers stand out on their own merits versus adherence to a category.

“At Surly, we don’t brew to style. If you had to define our flagship beer, Furious, it would be a hybrid IPA/English special bitter,” said Ansari. “Honestly, you can call it whatever the hell you want. We don’t get hung up on trying to define things. This might not be normal, but it’s what we’ve always done.”

Updates on Surly’s distribution in Missouri will be posted to its website and social media channels in coming weeks. The KC Weiss is a new release from Cinder Block Brewery out this month. (Pete Dulin I Flatland)

This month’s releases run the gamut from lager to weiss, porter to farmhouse ale.

Look for Cinder Block Brewery’s Hop Maven 8 (details in calendar listing) and KC Weiss (5-percent ABV, beginning of July, taproom and limited market release), a Berliner Weiss-style with a refreshing tart wheat flavor created by Lactobacillus and Brettanomyces. Cucumber, blood orange, or mango guava ginger flavored syrups may be added to the weiss beer. Cranberry Gose (taproom only, end of July) is an Arts & Crafts homebrew winner scale-up by David Schumacher. Tart, crisp, and light bodied with residual sour finish brought together with the acid characters of cranberries. Champagne Cider (taproom only, end of July) is crisp and dry with a hint of fresh Chardonnay grape tones.

Free State Brewing Company’s Garden Party Lager (4.8-percent ABV, available now at brewery, bottles and draft in Kansas and Missouri), a 2015 Great American Beer Festival gold medal winner, gets its name from the addition of cucumber, basil and juniper. Blood Orange Radler with house orange soda is on tap at the brewery.

Kansas City Bier Company’s Der Bauer, a rare German Farmhouse Ale (7.5-percent ABV, on draft at brewery and in Kansas City), resembles a traditional French farmhouse beer, but it is made with all German ingredients. It is also fermented with a Saison yeast strain from a Strasbourg brewery.

“It is a very hoppy beer with Perle hops and is one of our only beers to receive dry hopping, done with Hallertau Mandarina Bavaria hops,” said head brewer Karlton Graham. Grain to Glass (1611 Swift Avenue, North Kansas City, Missouri) hosts a Thursday Tasting: Boulevard Brewing Love Child Bottle Share. The shop has Love Child No. 7 and No. 8, and encourages participants to bring in their own bottles from earlier years. It’s $15 to attend or $10 if you bring a bottle.

Grain to Glass offers a Homebrewing for Beginners class (4 to 7 p.m., $50). Learn the techniques of sanitizing, brewing, and bottling. Students will brew a batch and bottle. Everyone takes home bottles.