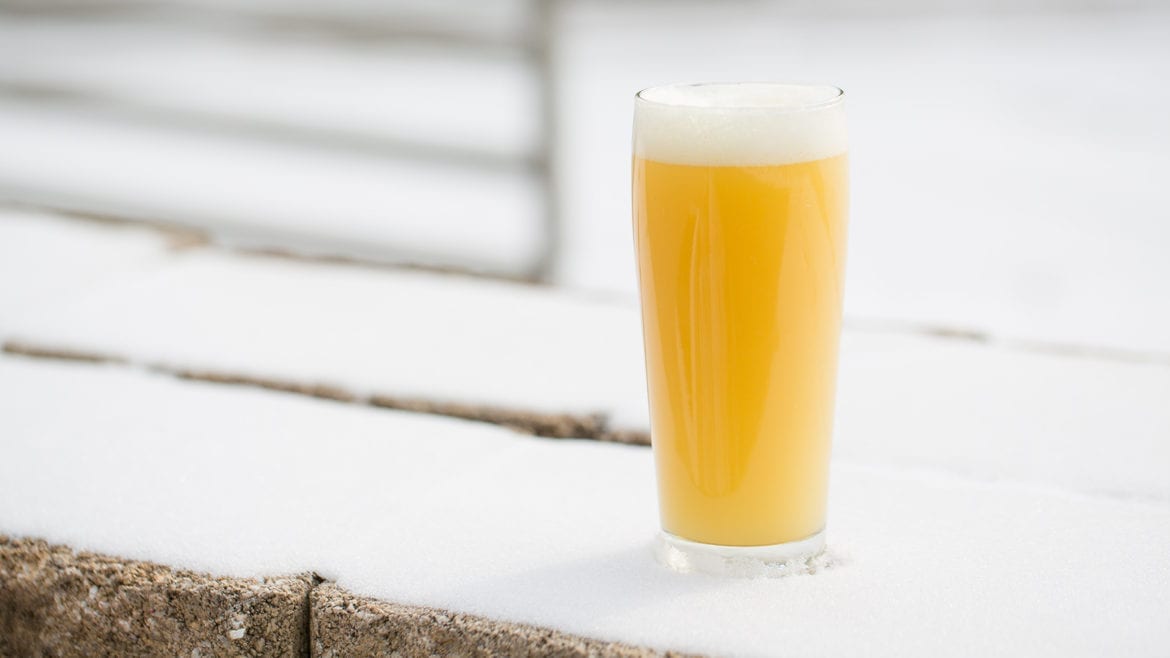 Women in the brewing industry are a small but growing number. In Kansas City, women work in roles in and out of the brewhouse at Double Shift Brewing, McCoy’s Public House, The Big Rip Brewing Company, Martin City Brewing, Boulevard Brewing and Kansas City Bier Company, to name a few.

In honor of International Women’s Day on Thursday, March 8, more than a half-dozen members of the Kansas City chapter of Pink Boots Society gathered for a brewing session at The Big Rip Brewing Company (216 E. Ninth Ave., North Kansas City, Missouri). The women brewed a hazy IPA that will be released this spring at the brewery.

“The large grain bill was composed mostly of Pale (two-row) malt, a heavy dose of flaked wheat and oats, and a touch of honey malt for a hint of sweetness,” Bri Burrows, assistant brewer at The Big Rip Brewing Co., said. “The beer will be heavily dry-hopped twice with the Pink Boots blend of Loral, Palisade, Citra, Simcoe and Mosaic hops.”

Dubbed Foggy Haddonfield, the hazy IPA followed in the tradition of all Big Rip beers named after characters in science-fiction or horror films. This beer was named after horror film scream queen Jamie Lee Curtis, and is a play on the fictional town from “Halloween,” and her star turn in John Carpenter’s “The Fog.”

The mission of Pink Boots Society is to assist women beer industry professionals in advancing their careers through education. Officially formed as a new chapter on Feb. 6, 2018, the Kansas City branch holds special meaning for its members. Burrows found fellowship in the industry.

“It was fun hanging out with other members and making this beer together,” Burrows said. “Now I have many new friends I am able to contact if I need assistance or just want to visit them and see how their jobs compare to mine.”

“It’s a fantastic feeling knowing that you can go to someone who understands what it actually is like to be in your shoes,” Davis said. “We strive to educate, inspire and encourage our fellow beer sisters, and that is exactly what we will do. When I first joined, I couldn’t find any actual members in the area. It was such a disappointment. I started reaching out to women from other chapters and states and they welcomed me with opened arms. I felt included, and that was a first.”

After Davis moved to Kansas City in August of 2014, she worked avidly to find a few members in the area, recruit others and launch a local chapter. Mango Lassi is a New Collaboration Brew from Crane

Crane Brewing and Mike’s Wine and Spirits collaborated on Mango Lassi Berliner Weiss (4.3-percent ABV), a special release currently only available for growler fills at all Mike’s locations and on tap at the brewery while supplies last.

Mike’s Wine and Spirits beer manager Jeremy “Critter” Morton and owner Andy Doohan contacted Crane Brewing about developing a collaboration beer for its stores. Inspired by the Indian yogurt-based drink lassi, the brewery used its Berliner Weisse as a base and added mango puree, vanilla beans and lactose.

“The concept for this beer was proposed by our head brewer Randy Strange, and everyone was quickly on board,” Crane Brewery co-founder Chris Meyers said. “We used Mexican and Madagascar vanilla beans that I purchased from VAIN Vanilla in Kansas City.”

“The beer pours a hazy yellow with a quickly receding head,” Morton wrote in a blog entry on Mike’s Wine and Spirits’ site. “The nose is a pleasant blend of stone fruit and tropical citrus with a touch of minerality. The carbonation is very fine and doesn’t take over. The lactose and vanilla add a nice roundness and balance to the sourness.”

“This is definitely one of my favorite Weiss-based beers that we have created,” Meyers said. “It is tropical, creamy and delicious. It is still dry, but the lactose and vanilla adds a sweet richness that pushes closer to a dessert beer than I ever expected with the tart base.”

For the first run, each Mike’s store received a one-quarter barrel keg. Mango Lassi will be released in 375-milliliter bottles by the brewery in late spring or early summer. Morton created background artwork for the Mango Lassi bottle label by tearing pieces of photographs from National Geographic magazines and creating a collage.

Mark your calendars for these upcoming craft beer festivals. Kansas City Bier Co. (310 W. 79th St.) taps a limited quantity of Elizabeth’s Kolsch (5.2-percent, 20 IBUs) made by brewer Elizabeth Belden. Made for the brewery’s recent anniversary, this light, fruity and thirst-quenching ale originates from Koln, Germany. Another anniversary release, 2016 Oak-aged Doppelbock (7-percent ABV, 24 IBUs), was double-decocted and aged for two years on lightly toasted American oak. Barrel-aging and the use of oak chips has added flavors of vanilla and bourbon to the malty beer.

“We brought it to life,” Colony KC brewer Rodney Beagle said. “Thirty gallons of a brown wheat ale was mixed with twenty gallons of neutral cider and four gallons of pomegranate-cranberry juice. Get ready to take your taste buds on a journey.”

Cinder Block Brewery  offers a dollar off year-round beers for happy hour from noon to 6 p.m.

Drink for science! Bier Station and Tallgrass Brewing Company host a fundraiser for the March for Science Festival (April 14). Today, March for Science KC volunteers will sell $6 drink tickets for pints of Tallgrass 8-Bit Pale Ale. Five dollars from each beer sale goes toward funding for the festival. Enjoy a raffle with prizes from local businesses, games and trivia.

[Correction: An earlier draft of this post misidentified the Pinks Boots Society as the Pink Boots Brewing Society. There are brewers in the society, but not in the name.]