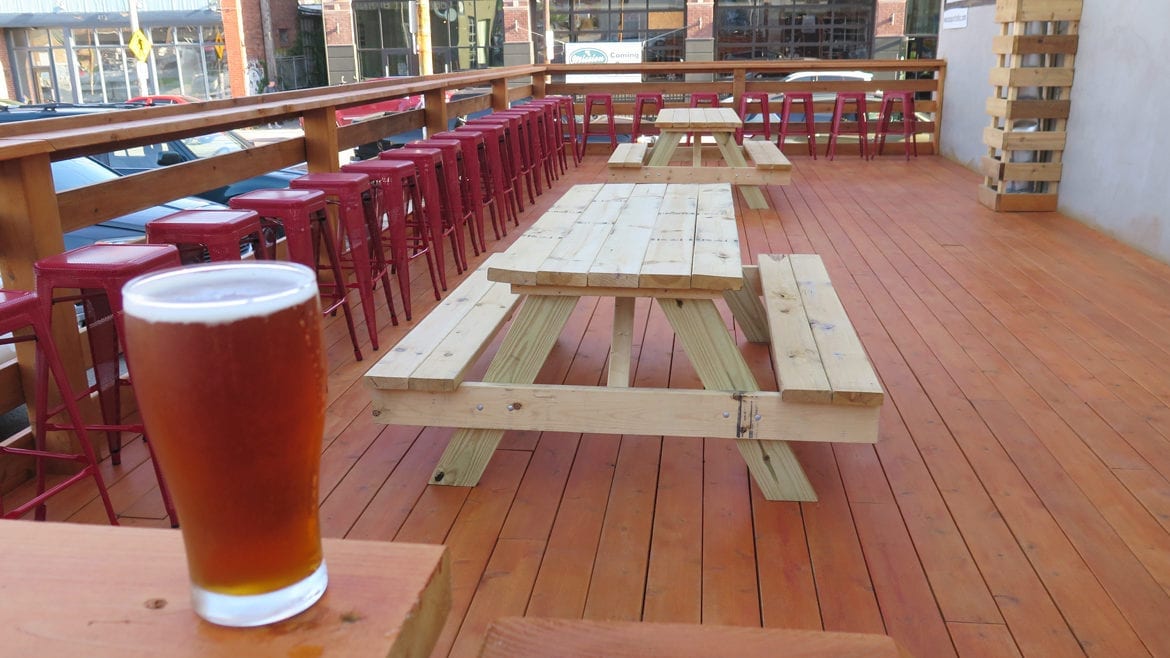 Border Brewing is marking its last week before moving down the street to larger facilities. (Pete Dulin I Flatland)
Share this story

Lawrence Beer Company (826 Pennsylvania St., Lawrence, Kansas) is coming to the Warehouse Arts District with beer and a band for its debut. This new 15-barrel, two-vessel brewery and restaurant kicks off its grand opening with a performance by ska punk band The Mighty Mighty Bosstones on August 25th. Tickets are $10.

“Sam cut his teeth brewing at the amazing Half Acre Beer Company in Chicago for five years, including commissioning their new production facility,” Matt Williams said. “He spent the last year working at Boulevard before joining Lawrence Beer Company. Sam’s background at Half Acre will lend itself to a focus on American Ales and IPA categories, but we definitely will play with seasonality and variations and all sorts of styles. ”

Williams has worked with breweries across the country for nearly a decade.

“I love the creativity, passion, and community-focused culture,” Williams said. “I’ve seen what works and what hasn’t worked in the industry. I identified our amazing Warehouse Arts District in Lawrence as a great potential location. We jumped in full force.” LBC won’t “be a regional brewery with large distribution and packaging.” Rather, it will focus on a community-oriented taproom model. And drinkers should keep an eye out for additional collaborations in the future.

“Several others are in the works soon after opening,” Williams said. “With all the talent and creativity out there, it just makes sense to get together and see what we can come up with.”

“It is one of the oldest [beer] festivals in KC. The pre-sale [price] makes it an affordable brewfest compared to the others in town,” said David Schumacher, a local homebrewer.

Schumacher brews under the name Schubrew. He is a member of the local homebrewing group Missouri Mashers that pours samples of homebrewed beer at area festivals. Missouri Mashers will share beer samples at UNICO Microbrew Fest. Some nationally distributed craft beer brands are also available.

This event, which includes food vendors and free live music, is open to the public. Beer sampling tickets are $25 in advance or $30 at the gate. Double Shift’s Guava Lamp is a new groovy addition to its lineup. (Courtesy of Double Shift)

The middle of your week just got better. Torn Label Brewing Company’s taproom (1708 Campbell St.) is now open from 5 to 10 p.m. on Wednesdays. The taproom’s other hours are 5 to 10 p.m. Thursday, 5 p.m. to midnight Friday, noon to midnight Saturday, and noon to 8 p.m. Sunday.

Kansas City Bier Company (310 W. 79th St.) released Mischuper last week. “Mischsuper is a blend I invented a couple years ago,” said Karlton Graham, head brewer at Kansas City Bier Company. “It is part Pils, part Helles and part Doppel Alt. Whenever I make some, it becomes almost the only beer employees will drink for a while.”

This beer blend has a “super clean bitterness with the nose of both noble and citrus hops,” Graham said. “The Helles gives it a gentle malt backbone to go with it.”

At Handlebar Happy Hour, meet fellow cyclists and bike advocates at Boulevard Brewing Tours and Rec Center (2534 Madison Ave.). All proceeds from Ginger Radler can sales benefit the advocacy efforts of BikeWalkKC. Bike valet parking available. Boulevard provides a free koozie to those that ride a bike or use Kansas City BCycle.

Swing by Charlie Hustle (419 W. 47th St.) for Beer Friday. The retail shop will have Stockyards Brewing Co. on site to serve samples of its brews. Discount available on the Stockyards Brewing T-shirt from the Brewmasters Collection. Free event, ID must be shown to receive tasting.

Learn how to brew at Grains & Taps (10 SW Third St., Lee’s Summit, Missouri) in a beginning brewing class ($20) for those just starting out with homebrewing. The two-hour class covers the basic methods used to make homebrewed beer from a kit.