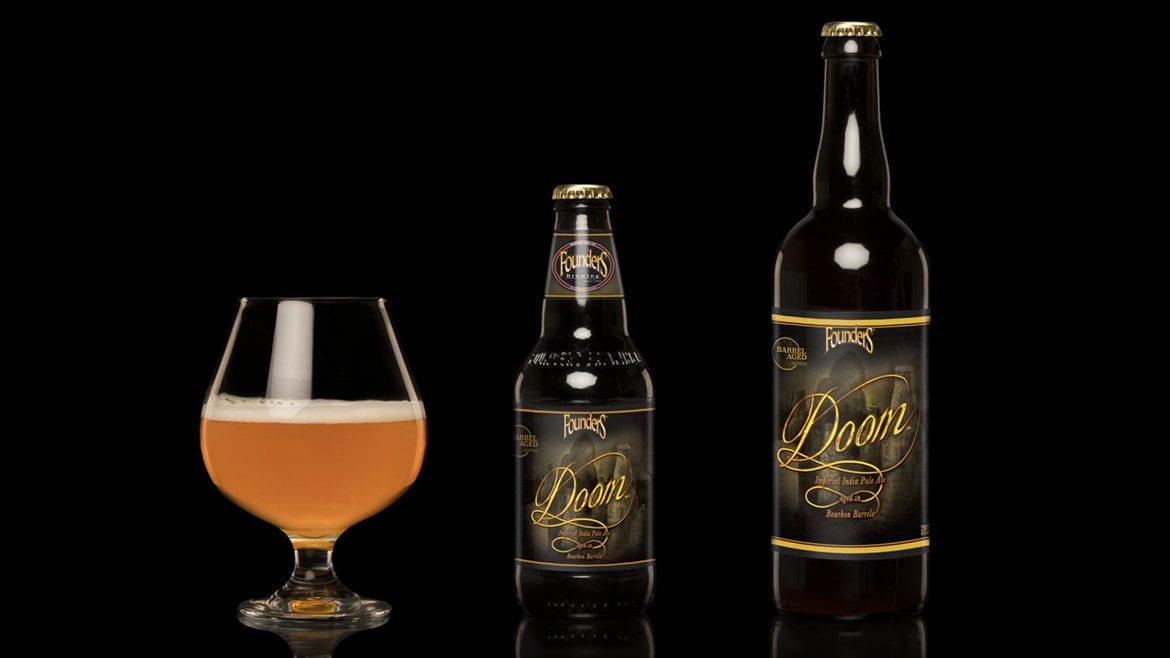 Back At The Bar With Founders Brewmaster Jeremy Kosmicki

Related: At The Bar With Founders Brewmaster Jeremy Kosmicki

“Doom was originally called Hand of Doom, after a song by one of our favorite bands, Black Sabbath,” Kosmicki said. “We went with simply Doom when we distributed the beer back in 2013, mostly to avoid any lawsuits from Ozzy. It was also barrel aged in 2013. We’ve used a variety of different brands and vintages in all of our barrel-aged beers so far, and this is no exception. It averaged around eight months in the barrel, then all the barrels were blended to achieve a consistent product.”

Doom arrives in Kansas City by mid-June in 750-ml bottles and 4-packs of 12-oz. bottles.

Kosmicki said originally he brewed Sumatra Mountain Brown, a Imperial Brown Ale with a hazelnut aroma, out of necessity. “In 2008, I ordered too much coffee for KBS [Kentucky Breakfast Stout]. We didn’t have a brown ale yet so I threw a bunch of coffee beans in the brew,” Kosmicki said.

Summer seasonal PC Pils, which doesn’t use traditional German hops, was Kosmicki’s first foray into brewing lagers. “I wanted to feature American hops like Centennial, Cascade, and Chinook that were readily available. It’s a throwback to traditional hops that gave craft beer its start,” he said.

American Craft Beer Week (ACBW) runs through May 21 this year. Promoted by CraftBeer.com and the Brewers Association, this year’s theme, “Beer It Forward,” encourages “beer enthusiasts everywhere to engage in simple acts of craft beer kindness.” 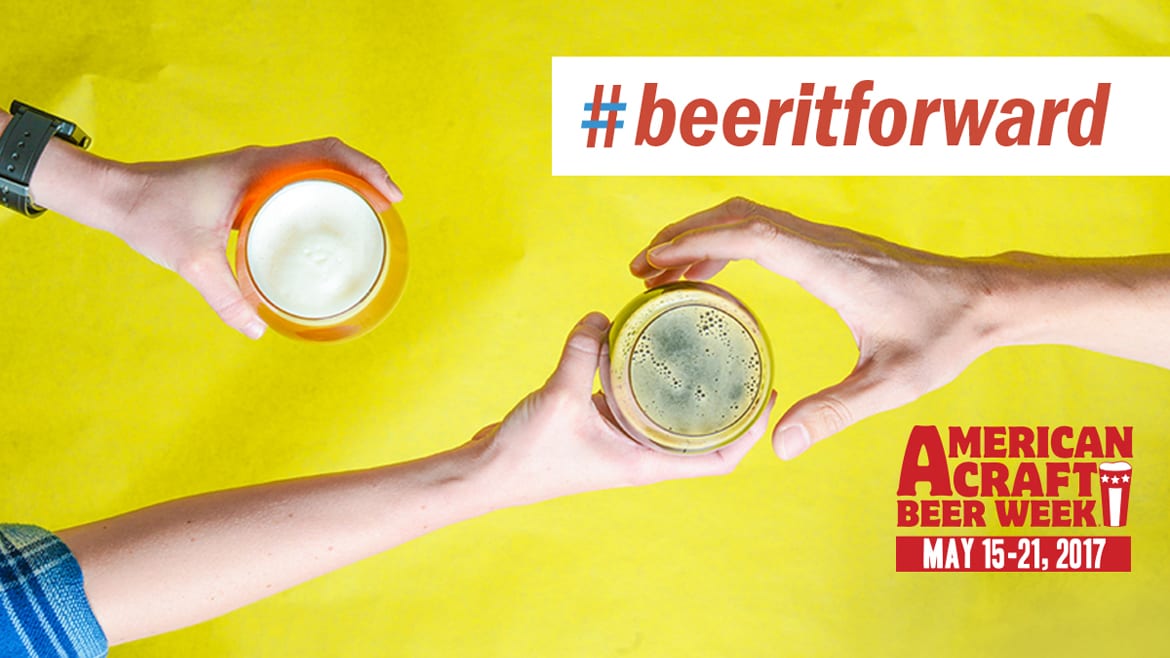 99 Hops House-Argosy Casino (777 N.W. Argosy Casino Parkway, Riverside) will have 10 select drafts for $4 each from Tuesday through Friday, that will rotate through the week. Also, the taproom will have rare bottle samples for guests sitting at the bar (that have purchased a beer) starting at 7 p.m., Tuesday-Friday.

See the Tap List calendar below for other local ABBW events and special beer releases.

Behind the Label: A Prince-Inspired Design

Chris Rau, a graphic design teacher at Raytown High School, designed the label for Martin City Brewing’s seasonal Purple Train, a Berliner-style weisse brewed with blueberries and lemon. Having created the company’s labels for gluten-free Yoga Pants, Monk in Scotland, Alchemy, and other beers, Purple Train is the first completely drawn by hand.

Initially, Purple Train’s design was literally a purple train steaming through a rainstorm. 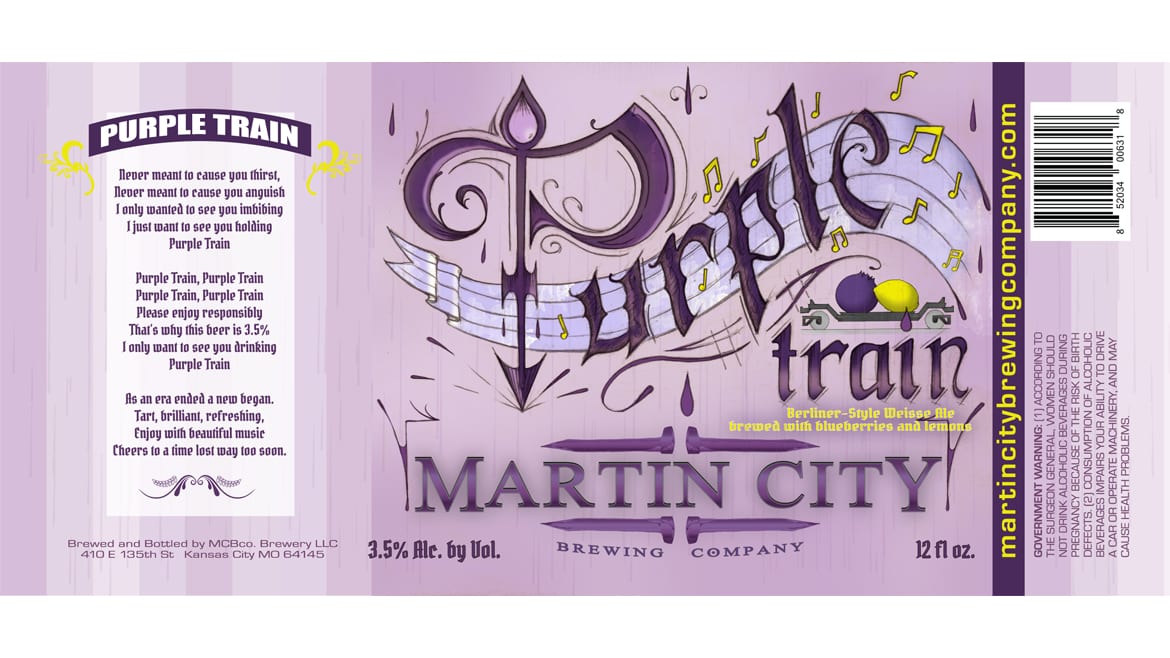 “It was too dark and serious looking,” Rau said. “The whole [beer] concept has always been a Prince homage.”

Rau made the label “a little more musical, whimsical, and colorful.” Matt Murdick, who originally connected Rau with the brewery’s owners, suggested having a train car hauling oversized blueberries and lemons.

“[MCBC co-owner] Matt Moore had the idea of taking inspiration from the Prince symbol and using a five-line staff with musical notes,” Rau said.

Moore provides broad art direction for each label with thoughts on color palette and feel.

“The benefit of having a friendship with your client is that the whole process feels much more like a conversation and much less like a presentation. We work through the whole thing together and no one gets bent out of shape, ever,” Rau said.

Rock and Run Brewery and Pub (110 E. Kansas Street, Liberty) released a witbier, Witish Invasion, and will tap a cask of Witish Invasion with passionfruit this week.

It’s the first-ever Tuesday Foosday at Boulevard Brewing Beer Hall (2534 Madison Avenue) from 3 to 6 p.m. Join the party with Sporting KC, play foosball, and keep a special cup from the event. Tapcade NKC (1735 Swift, North Kansas City) and Boulevard Brewing present Over The Tap, a video and board game decathlon with 10 beers on tap from 7 to 9 p.m.