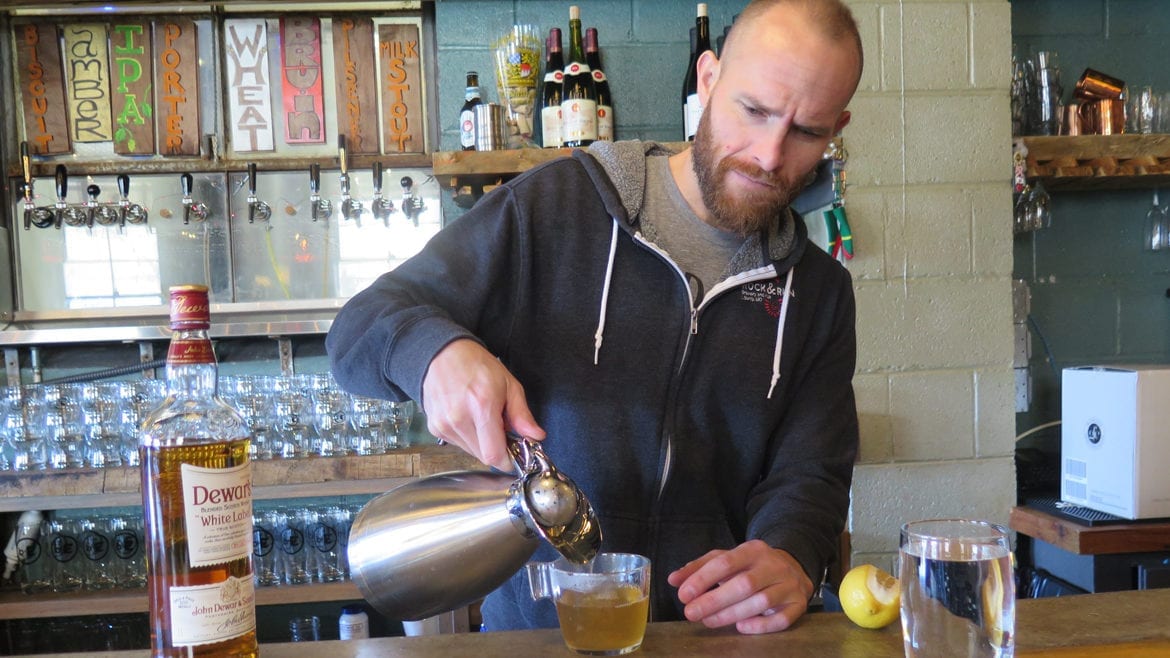 Brewery Emperial (1829 Oak St.) now offers “hot worties,” fresh from the brewing kettle. A hot wort, similar to a hot toddy, is free while supplies last only on brewing days, starting at 4 p.m., with the purchase of a beer.

Brewers Keith Thompson and Sterling Holman make wort for a new batch of beer on brewing days. Wort refers to the sugary liquid extracted from the mashing stage of brewing beer. Cracked grain, most commonly malt, is mashed, mixed in hot water and steeped to create wort. Heating enables enzymes to convert starch in the grain to sugar. Later, yeast is added in another stage that will feed on the sugars and produce alcohol.

Brewery Emperial posts the brewing day schedule on the brewery’s Facebook page and on Instagram. It’s the only clue that hot worties are available. A small amount of freshmade wort is reserved and stored at the bar. To fill an order for a hot wort, a bartender fills a mug with the sugary liquid and adds a shot of Dewar’s Scotch whiskey (or the guest’s preferred whiskey) to the beer cocktail.

The flavor, color and aroma of hot wort varies, depending on the wort produced for a particular beer style. A pilsner hot wort produced the light aroma of yeast and biscuit and a light hazy golden liquor. A stout hot wort would exhibit roasted malt notes. Thompson and brewery co-owner Ted Habiger learned of the drink when they worked at 75th Street Brewery more than two decades ago. Brewery consultant Artie Tafoya introduced the drink to the 75th Street staff. Federal law limits a homebrewer’s annual production to 100 gallons if there is only one adult residing in the household (and a maximum of 200 gallons if there are two adults). Since Randtke and Hightree sought to make greater volumes of beer and mead, they took steps to open a 2,400 square-foot brewery and taproom. The brewhouse consists of a three-barrel brew system with four three-barrel fermenters and three one-barrel fermenters.

“When we decided to open a brewery, James started to focus on refining his beer recipes. He’s been brewing longer than me and has brewed much more beer than I have,” Randtke said. “I focused on refining my mead recipes. There isn’t much good mead available on the market at a reasonable price, so I saw some potential in that.”

Regarding their approach to brewing, Randtke explained, “We’re trying to find the balance between consistency and experimentation.”

Past styles on tap included ginger-chamomile mead, Belgian wit, pale ale, and oatmeal stout. Wakarusa’s popular northeast-style IPA sells out regularly, so plans are afoot to brew more. Other potential creations include a vanilla-cinnamon mead and an imperial stout. Saminator is unleashed this week from Rock and Run Brewery. (Contributed | Rock & Run Brewery and Pub)

Let’s talk about sediment for a minute. Recently, Boulevard Brewing ambassador brewer Jeremy Danner wrote about “floaties,” or sediment, in beer. Sediment is not uncommon in different brands and styles of beer, but has become questioned more often lately with the rise in production and interest in hazy Northeastern-IPA styles.

“It’s perfectly normal for our bottled offerings to have some haze-causing sediment in the bottom of each bottle,” Danner wrote, regarding Boulevard’s beer. “The manner in which the beer is handled before and during pouring can certainly disturb this fine layer of sediment resulting in a beer that has a bit of a snow-globe effect.”

Boulevard Brewing also shared a recipe for Cranmerry, a tasty cocktail that uses its seasonal Cranberry Orange Radler, to help you ring in the holidays. Rock and Run Brewery and Pub (110 E. Kansas St., Liberty, Missouri) releases Saminator Quad IPA (14.3-percent ABV, 155 IBUs). The quad IPA is fermented a second time with sake yeast and honey to achieve a crisp, fruity finish that balances high alcohol content and a copious amount of hops. The annual release is named for brewer and co-owner Gene DeClue’s youngest daughter Samantha, who he describes as “sweet but also a force to be reckoned with.”

Tuesdays are also “Local Hero’s Night” from 6 p.m. to close at Rock and Run Brewery and Pub. Service industry men and women and local heroes, such as first responders, military, police and firefighters, that show a badge or food handler card will receive 25 percent off.

Colony KC (312 Armour Road, North Kansas City, Missouri) releases a “Star Wars”-themed beer dubbed Fly Casual (8.9-percent ABV, 56 IBUs), a wintry take on a dark saison with a color similar to Chewbacca’s fur. Brewery Rodney Beagle made Fly Casual with dark wheat malt and “fermented it above 90 degrees to bring out all of the yeasty phenols and esters commonly associated with the saison style.”

The Belfry (1532 Grand Blvd.) will have four beers from Brooklyn Lager. Try all four ($20 per per person, plus tax and service).

The Taproom at Crane Brewing (6515 Railroad St., Raytown, Missouri) taps two New England-style Milkshake IPAs, one with pineapple added and one with blackberries, for a different take on fruit beers.

Double Shift Brewing (412 E. 18th St.) releases Midnight Harvest Dark Sour (4.8-percent ABV). Midnight Harvest is the first kettle sour brewed at Double Shift. For the third year, Double Shift brewed this dark wheat sour with unmalted grains and ample dry hopping of Amarillo and Azacca hops for a bright citrus aroma. Hop Lung IPA (7.1-percent ABV) is named after the brewer’s experience of not wearing a mask and accidentally inhaling hops particulates, leading to a dry, burning sensation. Hop Lung is brewed with Loral, Simcoe, Mosaic and Azacca hops at nearly 3.5 pounds of hops per barrel. With heavy additions of flake oats and wheat in the mash, this IPA has notes of papaya, guava, and oranges with pleasant background tones of floral rose and spice. Fight hunger at Bier Station, Cinder Block Brewery, 4 Hands Brewing, Stockyards Brewing and Zipline Brewing host a tap takeover to benefit Harvesters. Bring in canned donations for a discount on beer and a discount on a bag of craft beer jerky.

BKS Artisan Ales (633 E. 63rd St., #120) welcomes guests for its grand opening and ribbon-cutting ceremony at 12:45 p.m. before opening at 1 p.m. City Councilor Scott Taylor and members of the Southtown Council will attend.

Ugly sweaters need love, too. Wear yours to Red Crow Brewing Company (20561 S. Lone Elm Road, Spring Hill, Kansas) and get 10 percent off beers in addition to the $4 happy hour pricing from 5 to 7 p.m. Red Crow’s Ugly Sweater Shirts are on sale for $10. Taste Of Brazil Restaurant’s food truck will serve food as well.

Glass Trading Night is for beer nerds that have an accumulation of beer glassware stashed away and can’t bear to get rid of it. The solution? Trade for even cooler glassware at Flying Saucer (101 E. 13th St.). Prizes awarded for oldest and largest collections.

Rock and Run Brewery and Pub celebrates its four-year anniversary throughout the month. Today, the brewpub taps Barrel Aged Psycho Imperial Stout (11.1-percent ABV, 72.5 IBUs), aged for a year in Buffalo Trace bourbon barrels, for its anniversary beer. Brewer Gene DeClue describes the beer as “big, bold, roasty, bitter and slightly smoky, everything an imperial stout should be. [The beer is] finished with molasses during fermentation for a rich flavor with a touch of sweetness.”