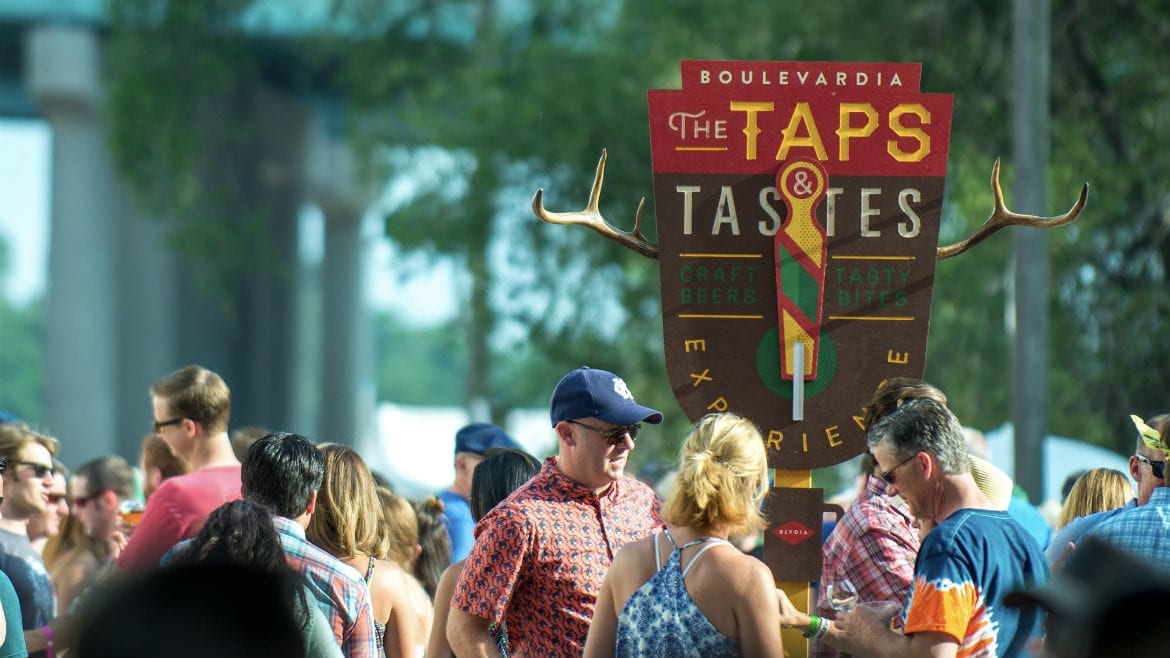 Taps & Tastes is one of the food and drink experiences at Boulevardia. (Contributed | Boulevardia)
Share this story

The best way to attend a beer festival is with a brewer at your side. You get insight into the beer and an occasional look behind the taps.

Taps & Tastes, a ticketed beer and food pairing session in the Hale Arena, is a bit like attending Boulevardia with Jeremy Danner next to you. The ambassador brewer for Boulevard Brewing Co. has put together the list of breweries in attendance since the festival’s debut in 2014.

Danner looks to find breweries that don’t distribute in Kansas City (30 of the 55 confirmed breweries for Taps & Tastes aren’t available in KC), but have a similar ethos to Boulevard.

“It’s not enough to make good beer. I’m looking for good people too,” Danner said. “It’s cool to have so many beers that aren’t available. It serves to differentiate our festival.”

Flatland got a preview of some of the beers that are headed to Kansas City for the beer festival in the West Bottoms. Modern Times Beer out of San Diego, California, is bringing Critical Band, a juicy, tropical, hazy IPA, Ice (pilsner) and Monsters Park Blackberry Cobbler Imperial Stout that’s been aged on blackberries, vanilla and cinnamon.

Switchback Brewing Company, which was started by former Boulevard brewmaster Bill Cherry is bringing eight smoked beer in honor of the Kansas City barbecue scene. Keep an eye out for a smoke IPA and saison with smoked malt from the Vermont brewery.

The full list of beers, sorted by style, will be released on the Boulevardia app next week. Tickets for Taps & Tastes on Saturday, June, 15, are still available. General admission tickets ($85), get you in from 4 to 7 p.m. Early Admission ($115) kicks off at 3 p.m. The tickets sold out last year the week of the festival.

Servaes Brewing Co. has created Love is Love (6% ABV) in honor of Pride Month. The sour beer will be made with a bunch of different color fruits meant to represent a rainbow. It will be available in cans and on tap later this month.

Grains and Taps made Pineapple Sherbet, a tart sour that’s on tap now at the Lee’s Summit brewery.

Sandhills Brewing will soon have Peregrine, a German-style pilsner, on tap at the Mission tap room.

Strange Days Brewing Co. is where you’ll want to catch the Women’s World Cup. The River Market brewery will show the opener on Friday, June 7, and will be showing the matches through July 7. This Saturday, Strange Days will tap its collaboration with Big Rip Brewing Co. and Girls Pint Out, a boysenberry and lemon milkshake IPA.

City Barrel Brewing Co. is set to drop Dad Jokes (7.9% ABV) from 7 to 9 p.m. To celebrate the new imperial hazy IPA, the Crossroads brewery is holding a try-not-to-laugh contest where your best (or worst) dad jokes are encouraged.

Bell’s Brewery will be holding a decorate your own koozie night at iTap Crossroads and Mission Taco at 6 p.m. When you buy a Bell’s beer, you get a koozie to decorate; and for the month of June, $1 is donated to Aids Walk KC for each Bell’s beer sold.

Made in KC (509 E. 18th St.)  is hosting WoodstoKC Fest, a chance to re-enact the famous concert on a smaller level in the Crossroads, from 5 to 9 p.m. Sip on Boulevard beer and eat a popsicle while shopping for vintage clothes, jewelry or locally made axes.

The Wiener Wagon is pulling up to Limitless Brewing Co. from 5 to 8 p.m. They’ll be bringing homemade brats and sausages and vegetarians can demolish a roasted carrot. Keep an eye out for See The World, the Lenexa’s brewery Hazy IPA.

KC Bier Co. will tap Zeller Keller (4.8% ABV) at 2 p.m. The unfiltered lager is a scaled up recipe from homebrewers Mike and Stephanie Butler, who won a KC Biermeisters competition and the right to have their beer made by the Waldo brewery.

East Forty Brewing Co.’s first anniversary week kicks off today at 12 p.m. with a birthday cake ale and a salted caramel milk stout. The birthday cake beer from the Blue Springs brewery includes actual cake from Simply Frosted, a cupcake truck, that will be onsite selling cupcakes to pair with beers.

The fourth annual Pup Crawl to benefit the Great Plains SPCA is from 1 to 5 p.m. Dogs are welcome to join their human crawlers at the 10 stops in North Kansas City, Missouri. Tickets ($25), include a shot, a koozie and discounts on drinks at Chicken N Pickle and Paul and Jack’s Tavern and Pat’s Pub.

Fire trucks are cool, no matter your age. You can touch a pair of antique fire trucks and try on firefighter gear, whether you’re a kid or adult at KC Bier Co.’s Touch-A-Truck from 3 to 7 p.m. KC Bier is also dropping Hook and Lager, a German-style red beer, and $1 from each Hook and Lager sold will benefit the KCMO Fire Historical Society.