Above image credit: A lager sits on the bar at BKS Artisan Ales in Brookside in this file photo. (Jonathan Bender | Flatland)

Helen Gregory got so caught up in her backyard gardening last weekend that when she finally remembered to look at her watch it was 7:12 p.m. She had missed the window to pick up some of her favorite craft beer.

A customer before the COVID-19 pandemic, Gregory continues to follow weekly Instagram posts by BKS Artisan Ales in Brookside, then orders from their weekly beer to-go options available through advance online ordering for Friday and Saturday pickup.

“There’s a frenzy,” Gregory says, with followers of BKS in socially distanced lines stretching around the block. “They’ve figured out a way to engage with their consumer in a responsible way.”

She is the Gregory in Gregory + Vine, a branding and communications consulting company with offices in Kansas City and New York. Her clients include national and international beverage clients, including Founder’s Brewing Co., one of the top 10 largest craft breweries in the world, and Concha y Toro, the largest producer of wines in Latin America. She has also worked locally with J. Rieger & Co. and The Monarch Bar.

Times are tough everywhere in a global pandemic, but Gregory says, “the more we invest locally, the better we will be in a year.”

To-go cocktails, doorstep liquor deliveries, bartender demos and virtual happy hours have kept consumers chugging along. But a steady quarantini diet can only sustain independent restaurants and bars, craft breweries and craft distilleries for so long.

Earlier this month, Nielsen reported brick-and-mortar alcohol dollar sales were up 21% while online liquor sales in the U.S. have “skyrocketed” 234% from a year ago — as on-site sales plummeted. The report warns “the reality is that the alcohol industry has a long road ahead to get to where conditions were before COVID-19.”

The Distilled Spirits Council and the American Distilling Institute also found 43% of distillery workers have been furloughed across the country, adding that the prospects for sustaining local distilleries in the coming months is “bleak.”

“There’s no way to sugarcoat this news – the economic climate for the craft distilling industry is dire,” according to Erik Owens, president for the American Distilling Institute, which represents 600 small, independently owned craft distillers.

Owners of The Monarch Bar on the Country Club Plaza were set to open sister bar Verdigris in Leawood in March. The city shut down bars and restaurants as the shelves were being stocked with bottles of booze.

In the interim, customers of both bars have been able to order signature cocktails to-go with the same garnishes the bartenders add to their dine-in drinks, such as citrus peel and edible flowers.

Bar manager Brock Schulte estimates The Monarch lost $20,000 to $30,000 in just the two weeks it took the state to relax liquor laws that allow bars and restaurants to sell liquor curbside — and that order is set to expire in June.

“I’m hoping there’s enough lobbying going on and enough taxes are coming in from this that the state keeps it going (after reopening),” Schulte says.

Nearly a quarter of the bars on The World’s 50 Best Bars annual list have shuttered for good, but Schulte is planning to reopen June 1.

Bartenders may need to wear masks that trap sound, making it harder to talk to customers over the music. He’s less certain about what mandatory glove changes would look like, figuring if all 15 bartenders change their gloves after serving a single cocktail, the cost would be prohibitive. 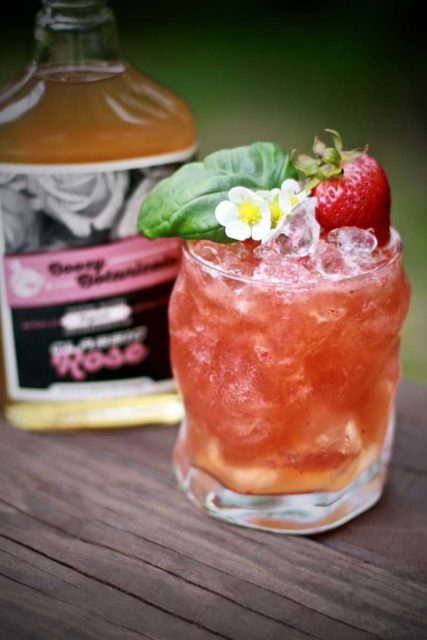 In your shaker, combine strawberries, basil and syrup and muddle (smash up) with muddler or back of a spoon. Next pour in 2 oz of the spirit of your choice (our favorites with this one are bourbon, gin & tequila) and a handful of ice. Put the lid on the shaker and shake vigorously. Strain into cocktail glass filled with ice and top with ginger beer. Garnish with fresh basil leaf and a strawberry. Cheers!

But he’s ready to try to see his customers. “I’m confident we will find a way to serve people in a classy and upscale fashion without it feeling like there is a stigma,” he says.

“It is a global pandemic. There is really no left wing or right wing,” Loo says. “Wearing a mask is just a safety measurement. We don’t want to get into this anger.”

Waldo Thai has been pivoting quickly throughout the stay-at-home order with sold-out pop ups and curbside takeout while feeding displaced hospitality workers. Loo has mixed up signature passion fruit margaritas in a pouch and bottled Negroni with lychee and shiitake mushroom-infused gin cocktails to-go.

He has also been posting cocktail videos on Instagram. A recent video introduced home bartenders to a local farm spirit and included a demonstration on how to make oleo saccharum – placing citrus fruit rinds in a bowl with sugar to produce a sugar-oil syrup.

“People have been asking for videos for a while, but I always think too much and worry if I have the right set up,” says Loo, who films the videos from his kitchen. But “the moment I am taping the video is the moment I don’t have to think about the pandemic. It’s a way to relax.”

The pause has also given Loo time to reset his palate – and by eating and drinking less on his off-hours to keep up on current trends – he’s saved $1,000 a month, money to tide him over until the bar business rebounds, something he predicts won’t happen until a year from now.

Beverage Dynamics reports buying habits have changed in the past several months as consumers stocked up and began to buy liquor in what the industry calls “large formats” – think beer in crowlers, wine in boxes and lots of vodka in larger-format bottles.

So, it would seem that a local mixer designed to bring the craft cocktail business to your home would be in high demand.

“I’ll start with the good news,” says Cheryl Bisbee, owner of Boozy Botanicals, a local woman-owned company featuring a line of organic, infused syrups that allows consumers to make craft cocktails at home. “Whole Foods put me in three new stores in three new cities during a pandemic without batting an eye.”

Boozy Botanicals Rosemary Mint Mocha is due to show up in the new downtown Loews Kansas Hotel coffee shop and gift shop when the hotel finally opens June 1. But all trade shows – including scheduled appearances at Expo west and the National Restaurant Association — are canceled, making it more difficult to get regional and national distribution.

“It’s just a waiting game,” says Bisbee, who used to practice law before starting her craft-cocktails-at-home business venture five years ago. “I don’t think things will be normal for the rest of the year.”

But Jim and Sarah Pierce, partners in Of The Earth Farm + Distillery in Richmond, Missouri, decided they were too small to make a difference.

“Since people couldn’t come here, we decided to take it to them,” Sarah says.

Sales have been promising but took a dip this week as some restaurants began to open. She plans to continue delivery “as long as it is feasible.”

A national survey conducted earlier this month by Influence Central found 94% of consumers still have not utilized home delivery services, but thought the idea had legs: “Marketers of alcohol brands and services should be…capitalizing on a market that hasn’t quite taken off yet.”

The Pierce’s main face-to-face retail outlet for their products remain farmers market sales, which are off 30% from a year ago. They considered pivoting to lean more heavily on sales of heritage pork raised on their farm. It seemed a promising strategy when Carlos Mortera, chef-owner of The Bite, inquired about buying a hog a week for his upscale sandwich shop in the City Market.

But due to COVID-19, small processing plants are fully booked. Most small meat processors have not added double shifts, and the logistics of ramping up more operations to fill the gap is not feasible.

“You can’t pop up a meat processing plant,” Jim says.

With liquor sales a best bet for now, Sarah has put together a COVID Cocktail Contest while she starts to move the tasting room outdoors to create socially distanced café-style seating. She hopes Of The Earth Farm + Distillery can reopen by the end of the month.

“I got a little distracted at first by people panicking,” Jim says. “So, I had to ask myself, ‘What are our plans and strategies?’ and stay with those, and that curbs the hysteria. I’m not discounting the seriousness of this. I’m just trying to find a middle path.”

Jill Wendholt Silva is a James Beard award-winning food editor and freelance writer. Among her many food-related pursuits, she is the co-host of Chew Diligence podcast. She also freelances with Harvesters and one of her food and beverage clients is Of The Earth Farm + Distillery.

An Immigrant and Her Family’s Persistence: Why the Pandemic Didn’t Shake the Spirits of These Lee’s Summit Restaurateurs

Study Ranks States on Safety During COVID-19 Pandemic. How did Missouri and Kansas do?

Food for the Cure Fights Cancer with Organic Food

How to Observe Memorial Day During the Pandemic

6 ways to honor the fallen this year

'We’re not out of the woods yet’