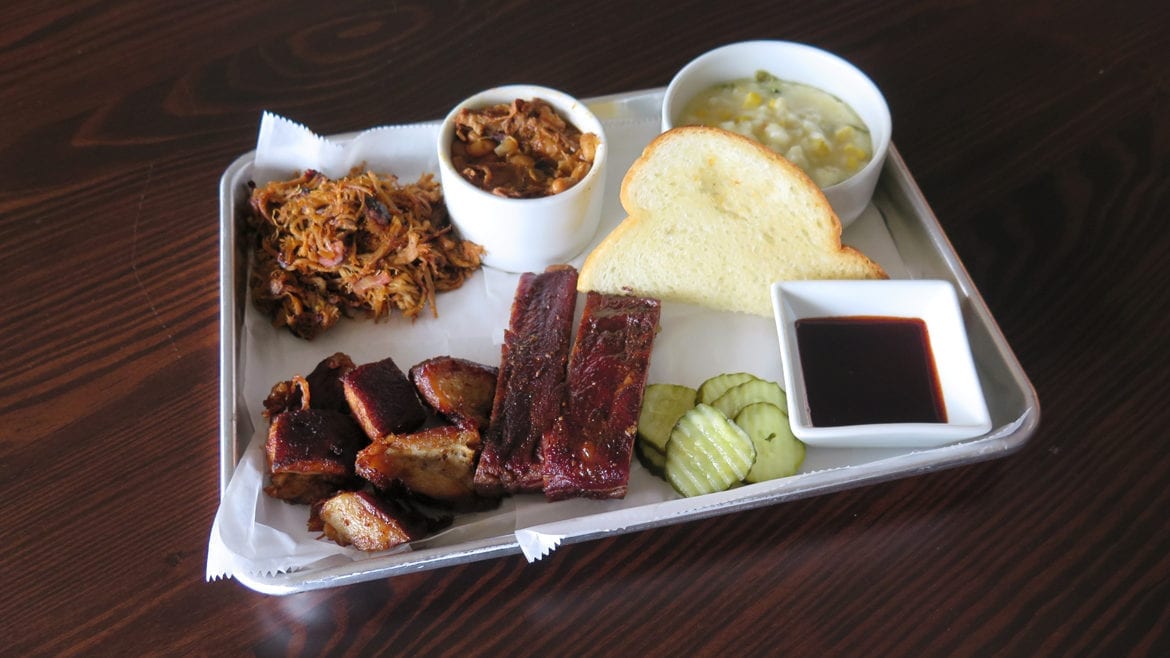 Downtown Lee’s Summit is smoking hot. Last week’s opening of Smoke Brewing Company (209 SE Main Street, Lee’s Summit, Missouri) adds to the city’s growing number of independent restaurants. The brewery and gastropub joins Fringe Beerworks (a brewery and taproom that debuted a month ago), Long-Bell Pizza, and The W cocktail lounge, which have all opened in the past 18 months.

The menu has its roots in the recipes and ideas for Building Smoke BBQ, the Edwards’ competition barbecue team.

“I wanted to do food that is close to what I think barbecue should be,” said Josh. “I hired Dan Patterson from The Rieger to be executive chef. The other chefs are Jacob Rose from The American and Brian Sonnich from Lydia’s. I found young people that had fire and drive. I wanted to give them a chance.” Smoke Brewing Co.’ s onion flat is a pancake-like appetizer made with onion and pork. (Pete Dulin I Flatland)

The menu has the hallmarks of classic barbecue dishes with an added touch of refinement. Pork 3.0 loads pork ribs, pork belly, pulled pork, a crock of barbecue beans, house pickles, corn-chili risotto, and Farm to Market toast on a tray. The sauce leans to the slightly sweet side with subtle spice notes that add complexity and barely-there heat. The ribs are modeled after competition-style presentation.

“Most Kansas City-style ribs are dry. Not ours. Rather than fall-off-the-bone tender, you should be able to leave a perfect bite mark in the rib meat so you can see the smoke ring,” said Josh. “Anyone can cook ribs long enough to be tender. The cooking time is more precise with this style.”

Appetizers include a garden tart with goat cheese, chicken fried bacon, and an onion flat. The onion flat is a pancake made of tender onion and topped with minced pork belly — a variation of a dish that Jeff grew up eating in Nebraska. Lighter fare includes a citrus beet salad and wrapped chicken salad. For dessert, the pecan chocolate pie is not to be missed. Rich and nutty, the pie is not cloyingly sweet like commercial versions. “We meet, discuss feedback on the beer and food, review reports, and decide what beers will be next,” said Josh. “We have many homebrewing recipes. We narrow down the ideas, adapt the recipes, and tweak them before release.”

The initial lineup from Smoke Brewing includes Black Udder Milk Stout, Keltic Kross Irish Red Ale, and Juice American IPA. The brewery has a pilsner and California common among other releases in the works.

“Dad and I are more malt-forward with our taste,” said Josh. “Bert prefers a more balanced beer. We’re not trying to be known for sours or hoppy beers. Overall, we do what make us happy.”

Beer also factors into the cocktails at Smoke Brewing Co. Craft bartender Mike Strohm of The W developed the cocktail menu at the gastropub. An Old Fashioned incorporates beer wort that adds natural sweetness to the classic cocktail. A charred lime daiquiri is a savory citrus sipper that complements other standards like the housemade Bloody Mary.