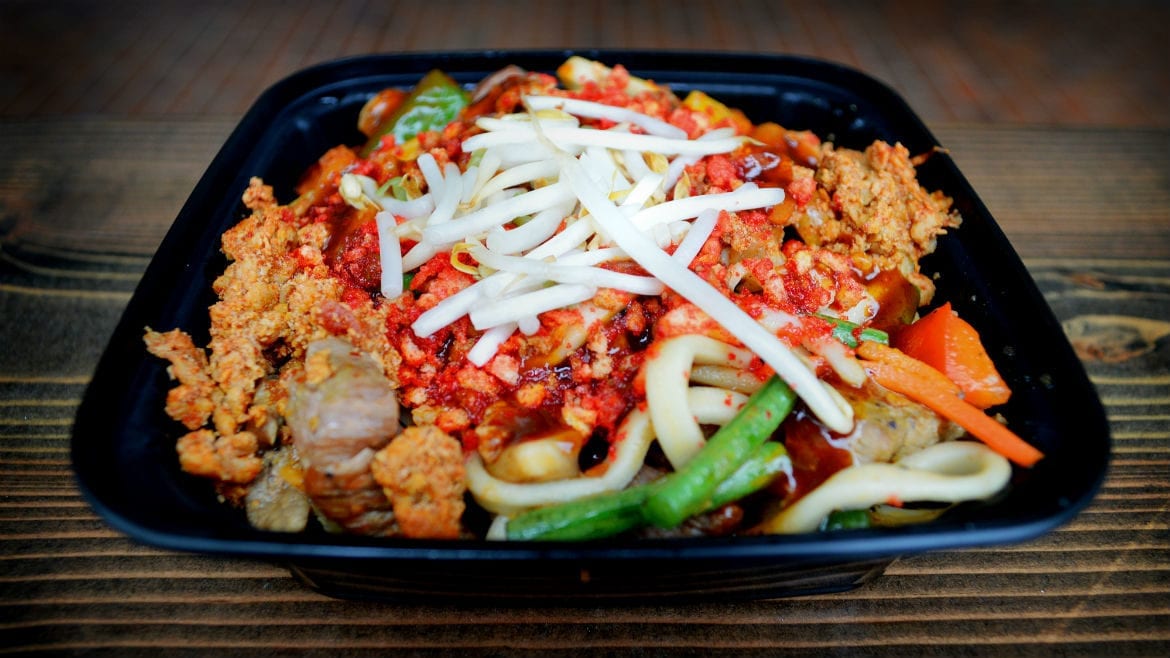 The Wu Tang Noodles, which come with a spicy Szechuan sauce, have been an early favorite of customers. (Jonathan Bender I Flatland)
Share this story

A framed photo of Chewbacca holding a surfboard hangs over the table where a couple is digging into a plate of noodles that’s topped with Alfredo sauce, avocado sour cream, and chimichurri. This is the Shaka Noodle Shack, where the decor is as unexpected as the flavor combinations. While we’re still getting our footing, it should also be mentioned that it’s connected to a smoothie shop, Hang 10 Pier, which serves cone salads.

“We’re not Asian fusion because we’ve got Italian pasta. And we’re not eclectic,” co-owner John Bailey says, searching for how to categorize the shop at 414 Armour Road in North Kansas City, Missouri. “We’re this tiny little noodle shop.”

Bailey is used to having a restaurant that doesn’t fit neatly into a category. One of the three partners in Shaka (Shem Yap Jr. and Gilbert Macapagal are the other two), Bailey also owns and operates Longboards with Macapagal. The wrap and bowl shop with Thai, Vietnamese Hawaiian, and Filipino influences has grown to four locations with a fifth in St. Joseph, Missouri, in the works.

“Longboards is the big brother. Shaka is the little brother,” Yap Jr. said, trying to help Bailey pin it down.

Longboards — which self-identifies as a “Pacific-style deli,” — is a place where hot dogs and imitation crab and peanut sauce and waffle fries and macaroni and cheese and Doritos or Sriracha aioli finds its way into wraps or on top of rice noodles. In many cases, it’s all of those things in the same wrap. It’s also the place where Shaka was ostensibly born. Macapagal, a restaurant veteran who worked in kitchens at JJ’s and Fedora, opened the first Longboards on North Oak Trafficway in 2004.

“Gilbert has a talent for putting together flavors,” Bailey said. “But he’s always experimenting and working on ideas.”

And some of those ideas just didn’t fit what Longboards has evolved into over the past 14 years. The Tito Alfredo — a dizzying take on Alfredo with fettuccine, shrimp, bacon, Monterrey Jack cheese, avocado sour cream and chimicurri — is a prime example.

“Gilbert will call me in the middle of the night and tell me to make sure I remember an idea he told me,” Yap Jr. said.

Macapagal will come in with a piece of loose leaf paper tucked inside a video game magazine. It’s a collection of loose notes that he hands to Bailey to organize and put together. It’s the beginning of a new menu item.

“The first version is totally different than the final version, but the flavor is always there,” Bailey said. The Wu Tang has been an earlier popular item. It’s got Szechuan ground pork that’s sweet, spicy and tangy. Lo mein noodles sit between a bottom layer of red chili oil and a top layer of black bean sauce that makes it worth the effort to mix the ingredients of the dish yourself before eating it.

You can see some Italian influences with short ribs over bucatini and a carbonara made with a peppered cream sauce and a take on Indian food featuring tikka masala curry and saffron udon noodles. Filipino classics — both Macapagal and Yap Jr. were born in the Philippines — like Halo Halo, a dessert made with sweet cream and fruit (which has been featured on the Longboards menu) and garlic fried rice appear on the menu. And then there are dumplings, nestled into burritos alongside lo mein and hard-boiled eggs.

The Papa Shem, named for Yap Jr.’s late father, is based off a dish he would make. Lo mein noodles are topped with pork, eggs and pork chili oil. Family is at the heart of Shaka. The flan recipe comes from Yap Jr.’s grandmother in the Philippines.

“My grandfather owned a small noodle shop called the Hong Kong Café in the Philippines,” Yap Jr. said. “Never in a million years would I have thought that I would have a noodle shop here.” Shaka is named for an easygoing island lifestyle and the space on Armour Road felt right. It was a few blocks from where Macapagal and Bailey had attended North Kansas City High School. It was also just slightly too big. So, the duo talked to Andy Cavanaugh, the owner of Smoothie Factory in Blue Springs, Missouri.

Shaka’s space is connected to Hang 10 Pier, a smoothie shop with “beach treats,” like cold grab-and-go items off the Longboards menu (The Bomb is turkey, bacon, mozzarella, hard-boiled egg, pico de gallo, lettuce and ranch dressing in a spinach wrap) and salad cones developed by Macapagal.

“We’re glad to be in this neighborhood. It’s new and exciting,” Hang 10 Pier manager Matt May said. “We’re a place to grab a quick lunch or a smoothie as a meal replacement.”

The salad cones, called “Krunch Kones,” are attention grabbers. The Paddler is made with mashed potatoes, The Bondi Beach is a curried chicken salad and the Kovalam Kahuna is a mix of Longboards’ crab, cream cheese and wasabi. Hang 10 will expand its menu in the future, adding on acai bowls and soup when the weather cools. The two spaces share a kitchen. Krunch Kones are food that is meant to be eaten on the go. (Jonathan Bender | Flatland)

“We’ve got 18 seats that fill up, and we hope that while somebody’s waiting for their noodles, they might go grab a smoothie or healthy dessert,” Bailey said.

Like what you’re reading? Flatland reaches into Kansas City’s communities to uncover stories you care about – like this. Support your local journalism here.
Tags: hang 10 pier • longboards • shaka noodle house