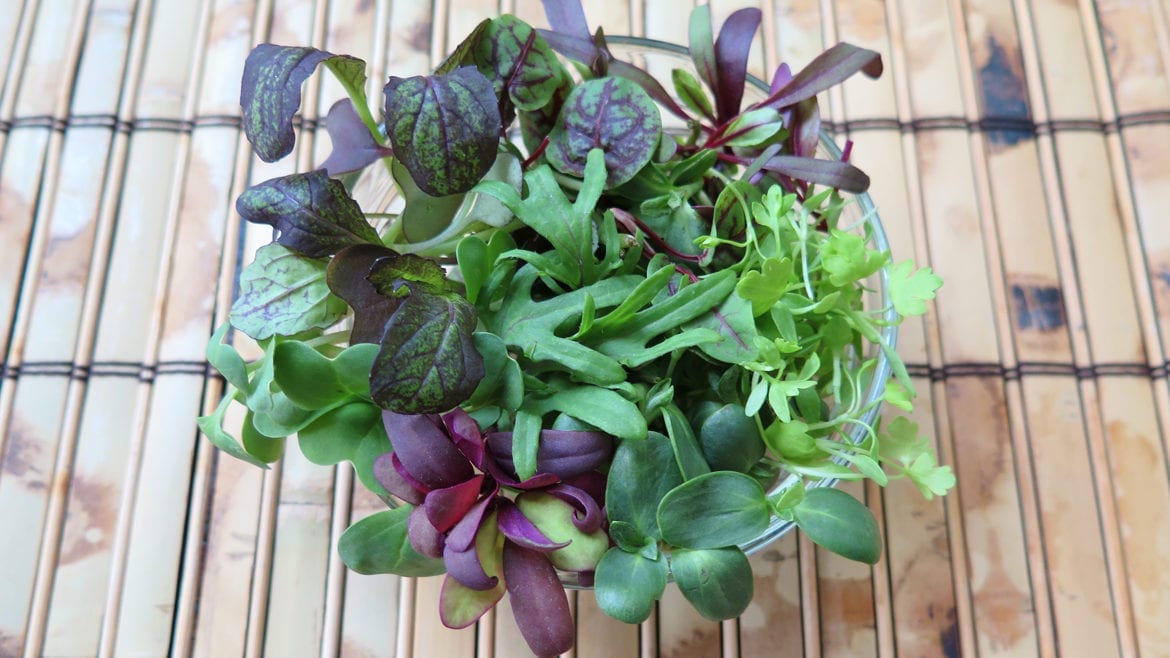 Greg Garbos of City Bitty Farm walks among tiny crops that will be harvested soon in the midst of winter in southeast Kansas City, Missouri.

Microgreens are whole plants that germinate from seeds and form two seed leaves (cotyledons), which are followed by the true leaves that begin to look more like the mature plant. In later stages of growth, as the true leaves become larger, microgreens are considered a different culinary product. Baby leaf greens typically sold in grocery stores are larger than the specialty products sold by City Bitty Farm.

“As a microgreen grower, we totally focus on quality products for chefs and people focused on hyper-nutrition,” said Garbos, referring to the farm’s client base.

Chef Ted Habiger, owner of Room 39, was the first restaurant to order from City Bitty Farm. It took three years before the microgreen farm landed an account that generated a steady source of income. Over the years, Chefs Brandon Winn of The Webster House, Michael Foust of The Farmhouse, Jonathan Justus of Justus Drugstore, and Colby Garrelts of Rye and Bluestem have also been customers. Chefs use these delicate greens to add flavor and color accents to prepared dishes.

Greg and his wife Jen, an engineer at Hallmark, launched City Bitty Farm in 2010 behind their home on a section of their two-acre property in south Kansas City.

Garbos is also an engineer by trade. He previously worked at Ford Motor Company and a firm in the energy sector, gaining a wealth of expertise in advanced engineering, hybrid fuel technologies, and data management systems. Garbos, a LEED-accredited professional, possess a deep knowledge of renewable energy solutions, how to make buildings energy-efficient, and winter food production.

Strikingly, Garbos had no prior agricultural experience before City Bitty Farm. Years ago, he designed a custom microgreen greenhouse for Eric Franks, a Pennsylvania microgreen farmer. In turn, Franks taught Garbos about this farming niche.

With City Bitty Farm, Garbos sought to reinvent the business model for farming. Rather than a large-scale farm, farmers market, or community-supported agriculture (CSA) model, Garbos devised an urban farm as a high-yield, energy-efficient operation with a small physical footprint.

“I have an engineer’s mindset,” said Garbos, who custom-built each aspect of the greenhouse.

City Bitty sows seeds, harvests microgreens, and makes deliveries 104 times annually. Table surface area in the greenhouse is designed to fit an ideal arrangement of trays. Below, layers of racks serve as insulated germination chambers where seeds pop and grow. When the seedlings reach the desired growth stage, seed trays are rotated to table tops. Growth continues on this “prime real estate” until the microgreens are harvested. Watering hoses and trolley carts are suspended on rails and slide along the length of the greenhouse, saving time while maximizing reach and efficiency.

“My wife and I own the farm but work full-time in professions off the farm,” said Garbos. “I needed staff [so] I am not on site every day. I needed to scale farm operations to make it profitable.” 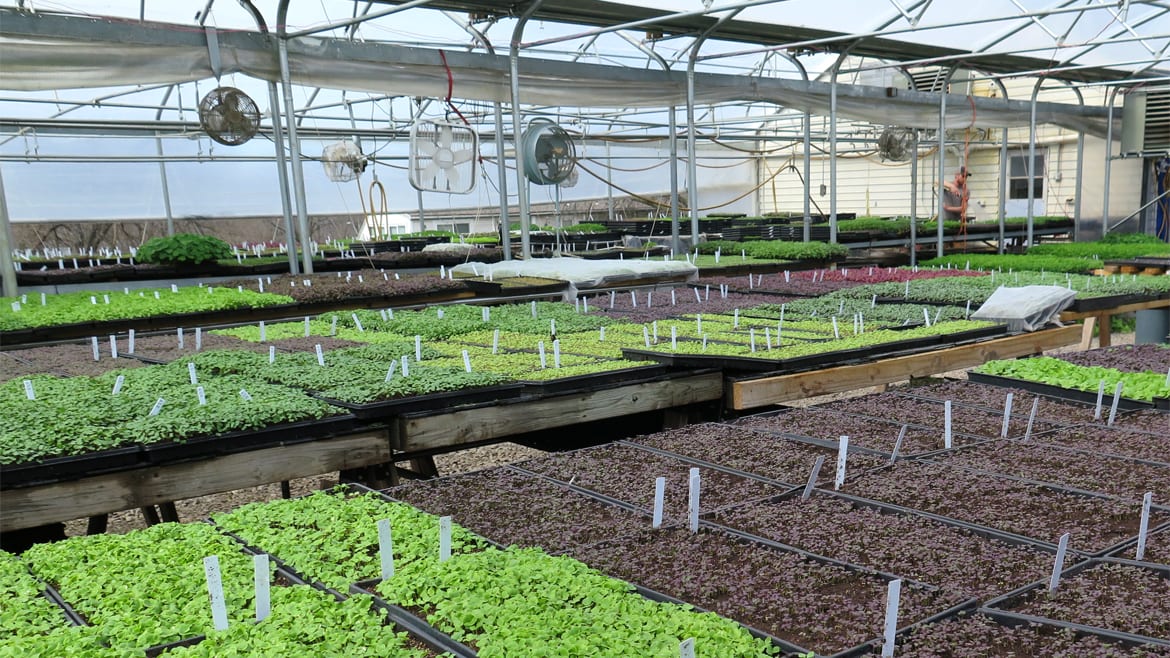 “Both farms and restaurants have easy entry into the field. You can work your way up,” said Garbos. “Our business model is tied to their business model. Both businesses rely on deliverables with a relentless schedule and heavy seasonality. They don’t stop for holidays so we don’t stop. They keep tables flipping year-round. We do the same thing with our trays in the greenhouse.”

Seasonal production and cash flow at large-scale crop farms tends to dip in winter. “It’s the same with farmers market and the CSA farm model,” said Garbos. “It’s hard to retain clients and employees when you only farm seasonally.”

City Bitty Farm’s ongoing demand and supply cycle enables it to forge through “the backside of the calendar,” and generate year-round cash flow.

“We try to have chefs not think of us as just ‘their microgreen grower,’” said Garbos. “We are a greenhouse extension of their restaurant. We grow to order. It’s intentional. We do this to support restaurants.”

Starting Life in Soil Versus Water

Garbos draws a clear distinction between his microgreens grown in certified organic compost and the majority of those grown across the nation using hydroponic methods.

“Our microgreens have more nutrition density and better appearance and flavor than those grown hydroponically,” noted Garbos.

The United States Department of Agriculture’s Agricultural Research Service led a study of key nutrients in 25 varieties of vegetable microgreens. The study was published in 2012 in the Journal of Agricultural and Food Chemistry. The results show that red cabbage microgreens had 40 times more vitamin E and six times more vitamin C than mature red cabbage. Cilantro microgreens had three times more beta-carotene than mature cilantro. Overall, microgreens have nutrient concentrations that are four- to 40-fold stronger than their mature counterparts, according to researcher Qin Wang, Ph.D., assistant professor at the University of Maryland in College Park.

City Bitty’s growers also pay close attention to the appearance of their microgreens.

“We harvest microgreens daily at the specific size,” said Garbos. “We are professional germinators. We start millions of plants each year.”

Growers watch the heighth of microgreen stalks so they don’t “get too leggy” in ratio to the leaves. Also, a day’s growth may entirely change the shape of leaves of kale frills, for example, that don’t fit established aesthetic standards that chefs expect. Microgreen leaves sell at a high price point. Allowed to grow slightly larger, these greens fall into a different product category at a different price.

As engineers and farm designers, Greg and Jen Garbos launched City Bitty Farm so they could better understand and service farms across the country.

When asked why he started his farm, Garbos replied, “My vision for a more resilient food system involves a dramatic increase in small-scale, year-round food production. We launched City Bitty Farm for chefs, and customers, who eat year round.”

On Tap | Brewery Emperial gearing up to open in the Crossroads