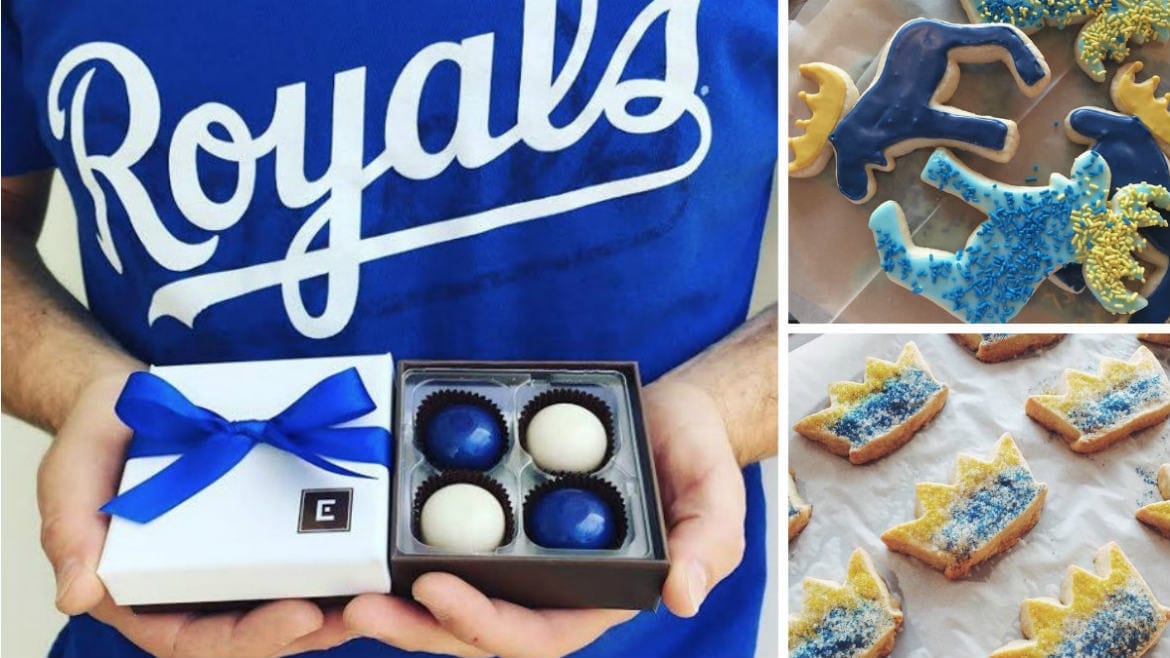 It’s all blue in Kansas City right now. Folks have donned shirts and hats to tell the world that they’re ready to see the Kansas City Royals take the crown. We don’t have an ocean, but we’re a sea of blue.

Since the quickest way to your heart is through your stomach, we set out to find some ways to properly honor the hometown team in food and drink. Plenty of restaurants and shops have embraced the Royals, and here are five ways for you to make sure that you’ve the playoff spirit — inside and out.

Blue + White Four-piece Boxes at Christopher Elbow (1819 McGee). The blue is fleur de sel caramel — Elbow’s most popular flavor — and the white is vanilla bean caramel. The limited edition boxes will be available throughout the Royals’ postseason run.

Royal Blue French Vanilla milk from the Shatto Milk Company. The dairy out of Osborn, Missouri, rolled out its newest limited edition flavor this week and it has a Royals’ hue. Royal blue French vanilla milk is the new release. If you’re a fan of White Russians, consider combining this with coffee liqueur and the next offering…

Commemorative Royals bottle from 360 Vodka. Major League Baseball has granted 360 Vodka a license to honor the Royals with a commemorative bottle that has a pennant, which says, ‘2014 League Champs.’ If you’re a vodka drinker and White Russians aren’t your thing, you may want to try and tackle the BloodyMaryTizer at Westport Café & Bar. It’s made with J. Rieger & Co.’s vodka and seven skewers featuring everything from chicken and waffles to pizza rolls to corn dogs. It serves two to four people. Tums are not included.

Moose Cookies at Heirloom Bakery & Hearth (401 E 63rd Street). This city has a host of iced sugar cookies to pay homage to the Royals. Get something a little different with the moose cookies (pictured above). Just a note, Heirloom will close at 3 p.m. Friday, so they can watch the playoff game, too.

Shortbread Crowns at The Upper Crust Bakery (7943 Santa Fe Drive, Overland Park, Kansas). It’s shortbread topped with sugar, but it’s so much more. You can take the crown, by the half dozen, from the shop best known for pie. They’ve also got apple pie with caramel and pecans, as well as blueberry pie (see what we did there) right now – so you’re probably leaving with pie too.

Need more chocolate and liquor in your life? On Monday, Oct. 19th, chocolatier and ice cream maker Christopher Elbow sits down with Julep’s Beau Williams to talk over the Hemingway Daiquiri as part of our digital series, Today’s Special.