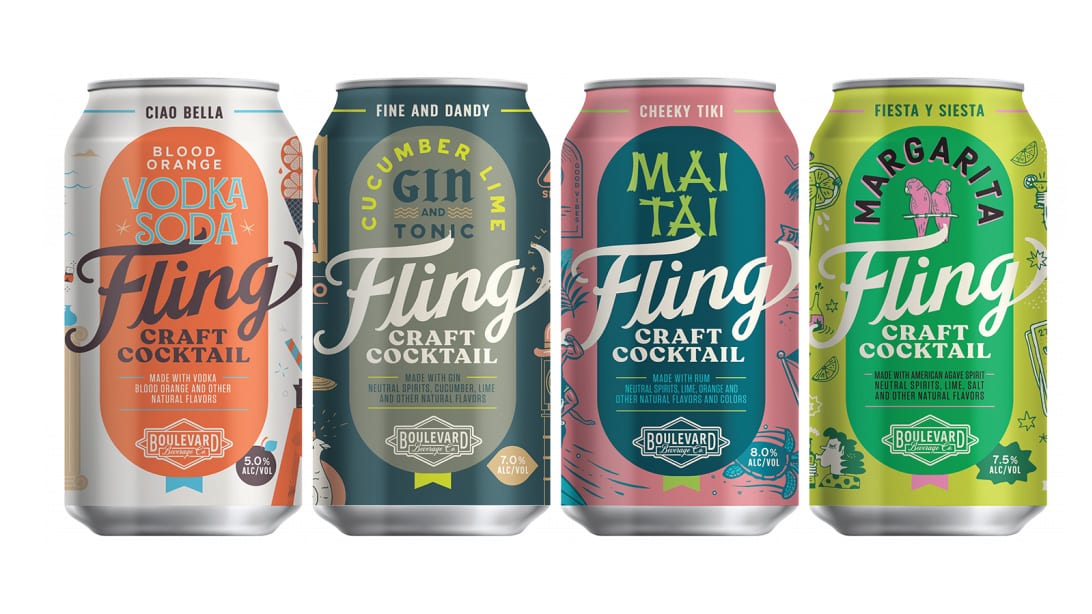 The future of beer could be cocktails in a can.

Boulevard Brewing Co. is getting into the ready-to-drink spirits business with Fling Craft Cocktails, which will launch its initial lineup of cans on Opening Day for the Royals, March 28, at Kauffman Stadium before hitting retail shelves later in April.

“It’s a great time to be a beer drinker, but it’s a somewhat challenging time to be a brewer,” said Natalie Gershon, Boulevard’s vice president of marketing. “Even as beer lovers, we dabbled in delicious things. We looked at what was missing that we would want to drink.”

Fling will debut four cocktail flavors — three made with local spirits — at The K. The Blood Orange Vodka Soda (5% ABV) is made with 360 Vodka, soda water and blood orange. The Cucumber Lime Gin and Tonic (7% ABV) has Restless Spirits’ Builders Botanical Gin, tonic, lime and cucumber. The Margarita (7.5% ABV) has Mean Mule American Agave, lime and salt. The Mai Tai (8% ABV) is rum with lime, orange and almond.

From the Still to the BarrelGo behind the scenes with the Shannon family's Restless Spirits distillery in North Kansas City. Michael Shannon explains the history, and Benay Shannon, the metro's only female head distiller, puts on her pink boots to walk us through the how-to. The Shannon's deep connection to Kansas…

Boulevard spent a year developing the product, talking with local distilleries and experimenting with different flavor combinations. Gershon expected to add additional flavors, potentially as soon as this year, and look at the consumer response to determine what might be seasonal and what could be a year-round offering.

“We wanted [Fling] to be the right mix of approachable and complex,” Gershon said.

Boulevard built a $10 million canning facility that began operation next door to the brewery last April. The canning line came on the heels of a $12 million project dubbed Cellar Five — a commitment to increasing its barrel-aging program — which has resulted in a deluge of barrel-aged and blended brews in the past several years. It’s not hard to connect the dots on how the latest venture came about for the brewery. More exposure to barrels and spirits, in combination with an increased capacity for canning — the line can fill up to 350 cans per minute — has led to the arrival of Fling.

“Our little side hustle started as an interesting diversion, but it’s taken on a life of its own,” Boulevard President Jeff Krum said in a release. “While we’ll always remain first and foremost a craft brewer, sometimes you just want something different. We have the facilities and the equipment and the talent to make all kinds of interesting and delicious beverages.”

Boulevard has experimented with spirits in the past. Left for Dead was a funky collaboration with J. Rieger & Co. The local whiskey distillery made a series of small batch spirits — the base was beer that Boulevard was going to discard — in 2016. Last summer’s Bou Lou, a collaboration with Tech N9ne for the Boulevardia beer festival, was inspired by the rum cocktail he immortalized in song.

A burgeoning trend nationwide, canned cocktails are still relatively new to the Kansas City market. Hochstadter’s Slow and Low Rock and Rye (42% ABV) has been here for a few winters, while San Diego-based Cutwater Spirits began distributing locally in just the past few months. Anheuser-Busch announced last week that it was acquiring Cutwater Spirits, the three-year-old company formed by former Ballast Point Brewing executives after the San Diego brewery was purchased for $1.3 billion by Constellation Brands.

An acquisition, in some ways, also heralded the arrival of Fling. Duvel purchased Boulevard in 2013. An infusion of capital and dramatic expansion for the brewery — Boulevard is now distributed in 41 states — made the possibility of expanding into a new category, like canned cocktails, possible.

“This is a portable option, perfect for tailgates,” Gershon said. “And I believe it will ultimately help us make better beer and look at new flavors.”