The Pick-Me-Up Gets a Lift 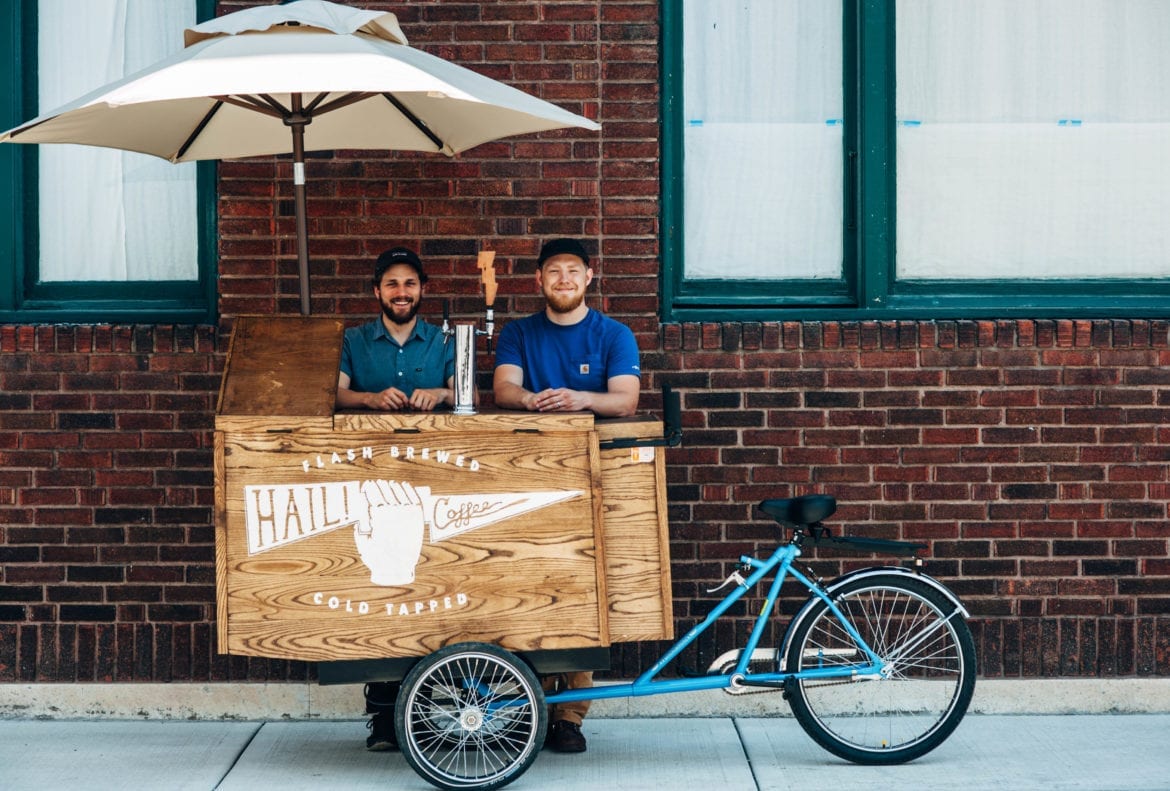 Hail! Coffee Co. is doing a nitro brew differently than anyone else in the Kansas City area — on a bicycle. Co-owners Chance Byrd and Caleb Roye flash brew their coffee, put it in a keg, put that keg on their aqua-colored bike and infuse it with nitrogen before serving.

And that keg weighs about 300 pounds.

Byrd and Roye have been friends since sophomore year at Blue Springs High School and were on the swim team together. But even the former varsity swimmers admit that at that weight, they can’t pump the pedals too far.

“[The tires] haven’t popped yet, surprisingly, but they do the tire-bead-pops-out-of-the-rim thing,” Roye said.

Roye, 26, currently works at PT’s Coffee Roasting Co. but was inspired to create some kind of coffee cart after hearing from a mutual friend who had created one in Tampa Bay, Florida. Byrd, 25, wanted to be part of the business aspect.

After conversations — and approval from Byrd’s wife — the two started woodworking in Byrd’s garage to create the Hail! Coffee Co. cart. It took them roughly three months to construct the wooden box holding the keg and nitrogen tank and to attach that box to the bike.

The duo used a Worksman Cycle tricycle, which has a platform between the two back tires. They deconstructed the platform to adjust the handlebars and switch up its positioning. Roye used his woodworking experience to construct the wooden box that sits on the platform and painted the logo.

In April, they took their creation out for a spin in the West Bottoms to get a taste of what to expect. Then, they went live during First Friday in May. The reaction was positive, even if people were confused.

“We’ve had people who don’t usually drink black coffee … but who really like it because it’s cold and a little different on their mouth,” Byrd said.

A nitro brew, unlike a cold brew or a coffee over ice, is infused with nitrogen. It’s also brewed hot, to at least 195 degrees. Roye said brewing the coffee hot keeps some of the appealing flavors in the brew.

“It‘s a really approachable cup of coffee,” Roye said. “South American coffee typically has more chocolaty, nutty flavor notes to them; the more prominent in ours is a dark chocolate and an almond. Once you infuse the nitro, it kind of has a creme flavor to it, but it really doesn’t have cream in it.”

Hail! Coffee Co. uses Colombian washed coffee from Post Coffee in Lee’s Summit. They also brew and keg their coffee there, and store the coffee bike and trailer.

Whether it’s First Fridays or a pop-up event around town, the two load the bike, nitrogen tank and keg onto a trailer and haul it where they need to go. The coffee community has enthusiastically embraced the brew, they said.

“I think it’s cool the coffee community in Kansas City has been so supportive of everybody, and I think that’s why there’s been so much growth,” Byrd said. “It’s fun to see so much support for even the little guys. It’s fun to be a part of the community who enjoys what you’re doing.”

Going forward, the two said they’ve played around with the idea of adding a latte to their bike to cater to a wider audience.

“There’s this community that likes black coffee and the nitro version, but then there’s the demographic that comes up and says, ‘If you don’t have cream or sugar, I’m not interested,’”  Byrd said.

The bike has been up and running only a little more than two months, and Byrd said they’re focused on creating a strong customer following. He uses Instagram and Facebook to announce week by week where the cart will be.

“I think that’s what’s important for us being mobile, having consistent places where our friends and people who want to see us can find us,” Byrd said.

Besides First Fridays and the upcoming Strawberry Swing Craft Fair on July 23, the nitro duo often can be found selling their coffee in front of Columbus Park Ramen Shop on Gillis Street.

The nitrogen-infused coffee, which sells for $3.75 a cup from the coffee cart, has a short shelf life. And while that’s been perfect for festivals or events, Byrd said they’ve struggled with whether they’d like to try bottling it.

“We don’t want to sacrifice our flavor or our brand,” he said.

Along with creating a customer base, the two are interested in breaking into the wedding scene. When winter hits, Byrd said they’d like to move indoors and possibly do indoor weddings, but no plans have been finalized. Wherever their future takes them, the two agree it has been rewarding to be working in the city where they grew up.

“I think there is something that’s engrained in Caleb and I — both of us just loving and serving our neighborhood and just being here,” Byrd said.