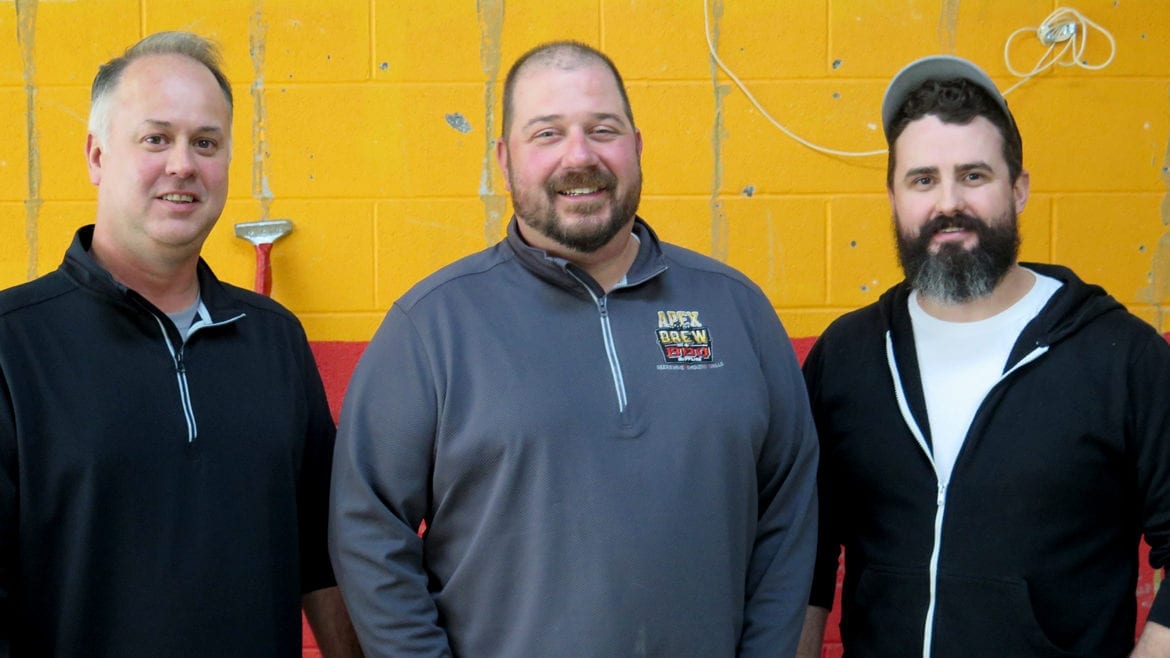 Commercial breweries always seems to start with homebrew. But Apex Aleworks, a new brewery slated to open Thursday at 4356 S. Noland Road in Independence, Missouri, started in the same place as all homebrewers: the homebrew supply shop.

“I think homebrewers have a unique attitude,” Jeremy Parratt, who owns the business with his wife Mollie, said. “When something doesn’t work like it is supposed to, we just roll up our sleeves and make it work.”

Parratt was a homebrewer who wanted to find a better way to get glassware and ingredients. So he launched Apex Brew Wares out of his basement seven years ago. The success of his homebrew supply shop convinced him to open Apex Brewing & BBQ Supplies, a brick-and-mortar store, at 4360 S. Noland Road in Independence.

On Saturdays, he would chat with Tony DiPlacito, a fixture in the local homebrew scene, who worked one day a week at Apex Brewing. The two would talk about what their brewery might look like and what it would serve.

When the adjacent space became available, Parratt made the decision to go forward with Apex Aleworks. He ran a successful Kickstarter campaign in June, raising more than $17,000. DiPlacito signed on as the head brewer and Josh Sartin would handle the taproom operations.

“We lean toward brewing classic styles. We have traditional IPAs and dry English ales,” Parratt said. “That being said, we’ll still have some things to get your interest.”

By the end of the year, Independence could actually have two breweries. 3 Trails Brewing is in the works on Independence Square.

Tap List | Grains & Taps is Launching a BreweryChicago had Mrs. O’Leary’s cow. Grains & Taps (10 SW Third St., Lee's Summit, Missouri) will likely someday point to an exhaust fan as the reason it's brewing beer this winter. Brad Boehm still remembers the moment in February when he came to…

Apex has 18 taps currently, and Parratt expects to be pouring at least a dozen beers alongside kegged cocktails (a Moscow mule made with house ginger-beer syrup). The new taproom is serving Apex’s New England IPA (with or without peaches), a Berliner Weisse, a coconut malted milk stout (which recently made the rounds on the local beer festival circuit), Naked Cowboy Oyster Stout, a hoppy wheat and an English Mild (DiPlacito won the KC Bier Meisters homebrewing competition in 2016 with his Wily Mild).

“The oyster stout has a little bit of briney-ness. It’s more about the mouthfeel, it’s not necessarily salty,” Parratt said. “The New England IPA is a true hazy IPA.”

Parratt plans to serve bar snacks — there’s a free popcorn machine — and is looking at adding charcuterie or pretzels to the menu. Apex’s homebrew shop and taproom are connected, and drinkers are allowed to explore the nearly 6,000 square feet with a drink in hand. Apex is not the only homebrew supply shop to add a brewery. Grains & Taps in Lee’s Summit, Missouri, raised more than $20,000 on Kickstarter in September to help fund a new brewhouse.

Apex Aleworks will be open from noon to 10 p.m. Monday through Thursday, and noon to midnight Friday and Saturday.