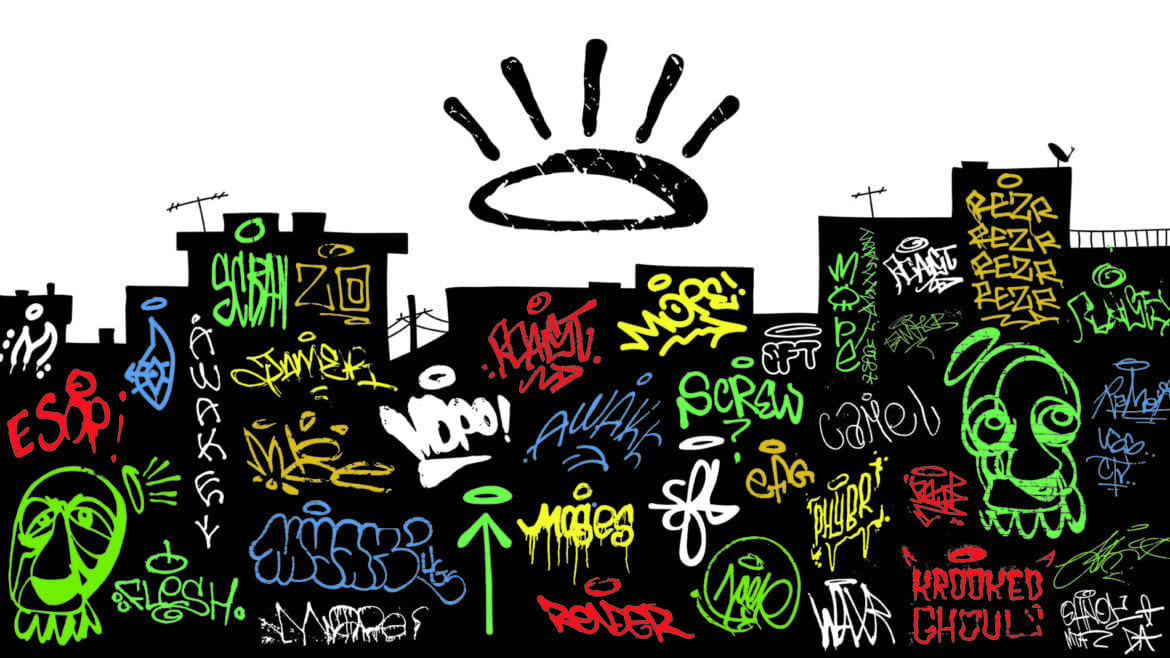 Passersby along Southwest Boulevard may notice the graffiti that covers the Crossroads Art District. It’s everywhere: down alleyways, along buildings, across dumpsters and even on electrical equipment.

Heading east, past the well-known, large animal murals of Scribe, sections of the district are covered in lone “tags,” or the pen name of artists. These artists, who go by names such as “Mope” and “Awake,” are more underground, trying to keep their identity hidden. After all, what they’re doing is illegal. Sometimes, their work includes “halos,” a circle at the top of the name.

Aaron Lowrey, who works near the Crossroads, wondered why the number of graffiti tags seems to be increasing and why so many of them are accompanied by the halos.

The artist tag “Waseo” popped up throughout Kansas City until it stopped showing up a couple of years ago. Waseo’s tag was often accompanied by phrases such as “a whole heart apart.”
Lowrey said he wondered if the artist was making statements on gentrification, as he would see them on buildings that were being rehabbed or demolished. Lowrey provided old photos of Waseo’s statements to Flatland.

He reached out to Flatland to see what’s the story behind the halos.

At first, Lowrey suspected the halos signal that the artist has passed away or been caught by police, a common thought shared by many online.

To further investigate, Flatland met up with local mural artist JT Daniels, who is familiar with graffiti culture and responsible for work such as the melting bricks on the side of Betty Rae’s Ice Cream in the River Market. He said he thinks the halos may just be a style choice or a design aesthetic.

He said the meaning of a halo could range from someone calling themselves “the king” to using it as a balancing point on top of their tag, forming a triangle. They could use it to say they are claiming territory or that they are often in that area.

Even graffitied numbers could vary in meaning, from a street name to someone’s age or a train line. Daniels said there was nothing ominous about these tags and that they were not related to gang activity.

“It’s what you do to add an attachment to your name,” Daniels said. “It’s not a RIP mural or something like that.”

When it comes to the number of tags throughout the Crossroads, Daniels said he doesn’t think it’s really been increasing. It might be that the tags get cleaned up, then the artists come back and put their names out once again. It’s part of the world of graffiti art that those on the outside won’t understand.

But law enforcement does care.

If a graffiti artist is caught in the act, the charges will vary based on the cost of the damage they have done. According to Kansas City police Detective Tim Mountz, damage adding up to $750 is a felony. Anything less is a municipal charge, with penalties from up to six months in jail, a fine or probation.

It’s been a handful of years, however, since he’s caught a graffiti artist.

Graffiti investigations also compete for time with bigger issues like burglary and auto theft, Mountz said.  “And so, unfortunately, because we have to prioritize things, unless the graffiti is really significant, it’s difficult for us to devote a whole lot of time to those.”

While cleaning graffiti is often not a top priority, in more serious cases of vandalism, it is shoved to the top of the list, such as the quick scrubbing that occurred after the recent political statement graffitied on the National World War I Museum.

As for the halos on Southwest Boulevard, they say to Lowrey and all those who notice: Mope and Awake were here.

—Peter Loganbill is a summer intern with Kansas City PBS.

editor’s note: The text in this post was rearranged to fix editing errors.