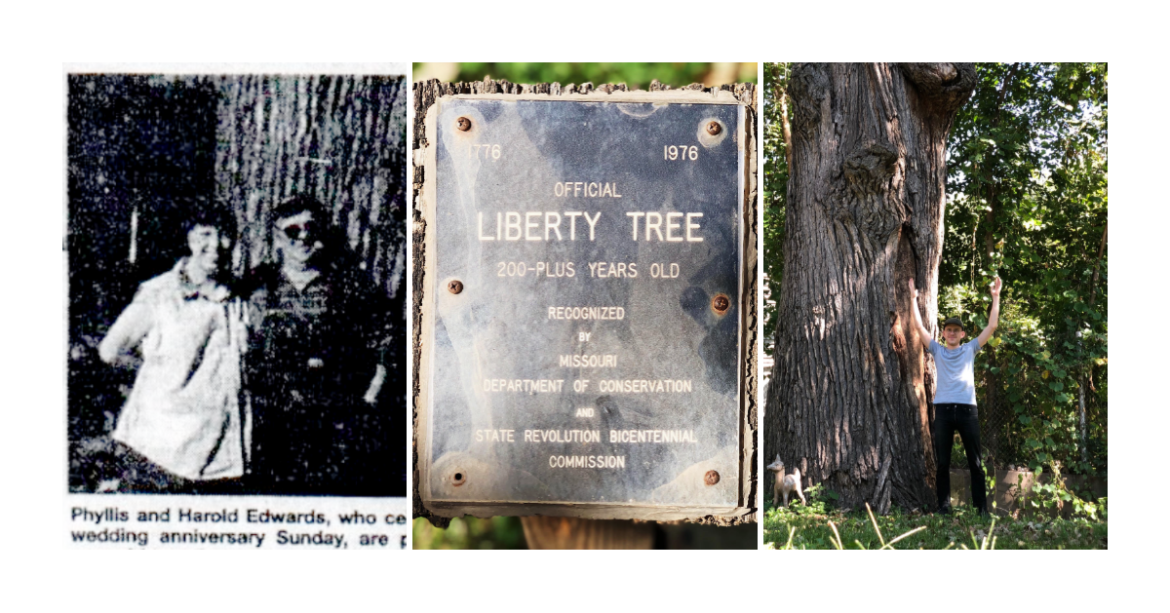 (Left) Phyllis and Harold Edward are the original owners of the house on Monroe Avenue where the Liberty Tree lives. (Center) The bicentennial plaque that now belongs to Ben Jones (right). (Vicky Diaz-Camacho | Flatland)
Share this story

There’s a certified branch of local history looming over 328 S. Monroe Ave. in the old Northeast area of Kansas City.

A bur oak towers to the left of the red brick house with white awnings, which is owned by Benjamin Jones, who is a mechanic – or self-professed “pressman” – at Hammerpress. Jones has owned the house, which he’s been renovating to make into a free artist space, for about a year.

“I didn’t even notice this tree until I’d gone into the house a few times,” Jones said. “That’s a big tree.”

When Jones bought the house, the former owner gave him a framed certificate from 1976 that recognized the tree, then owned by a Frank E. McLaughlin, as a “Liberty Tree” and “a 200 year old living monument” to our nation’s history. The certificate was signed by then-Missouri Gov. Christopher S. “Kit” Bond as well as then-Kansas City Mayor Charles Wheeler.

Jones also found a plaque on a rotting wooden post a few feet from the tree that read: “Official Liberty Tree 200-Plus Years Old” recognized by the Missouri Department of Conservation and State Revolution Bicentennial Commission.

He wanted to know the history of his nearly 250-year-old tree and if anyone else in the area owned a so-called Liberty Tree. So Flatland reached out to the conservation department, as well as local arborists and foresters. Jones had done the same, but between his full-time job and home renovation projects, he didn’t have time to really dig in.

That’s where curiousKC came in.

As it turns out, Jones’ curiousKC question tapped into a long-lost history of the area’s bicentennial monuments. Finding answers proved difficult as the experts who spearheaded those activities are long dead. In Kansas City, it was the late Jerry Monterastelli, an urban forester at the Missouri Department of Conservation, who helped select the bicentennial “Liberty” trees.

The bicentennial program was led by the American Revolution Bicentennial Administration in 1976. This group identified significant landmarks in the United States that were about 200 years old at the time.

“A lot of people were in on it and it was a big deal,” said Mark Young, an arborist with Country Club Tree Service. “Jackson County was not a forested area, it was a prairie. So old trees were certainly something to value.”

According to Powell Gardens the certified bur oak is the second-largest local species of oak in the prairie, following the red oak.

In 2002, the Northeast News took note of Jones’ tree when the property was owned by Phyllis and Harold Edwards. That tree, according to the article, was a “runner-up for Champion Tree status in Missouri.” When an arborist inspected Jones’ tree this year, he said it was the largest tree he’d seen to date.

Indeed, Jones’ tree just might be the oldest living bur oak in the Kansas City area, particularly since the famous “Westport Oak” north of 43rd Street near St. Luke’s Hospital was removed because it posed a hazard for passersby.

“The branches of the Westport Oak shaded Indians and fur trappers on the nearby Santa Fe Trail, and they supported lynchings in the years before the Civil War,” according to a Lawrence Journal-World article.

Young recalled the “battered Westport Oak.” After a severe ice storm hit in 2002, he said, the tree’s debris proved dangerous enough to have the tree uprooted. Another bicentennial tree in Independence also was felled by the ice storm.

A third-generation tree servicer, Young said foresters looked at size to determine the tree’s age, which is not the most precise way. But that was the criteria set by the bicentennial administration.

“They gave people the opportunity to nominate trees and then you’d spring for the plaque,” he said.

Young said he also owns a bicentennial plaque he wants to put on an oak north of the Missouri River.

At this point, it’s unclear exactly how many bicentennial trees remain standing in the area. But at least one still stands tall beside the red-brick house on Monroe Avenue.