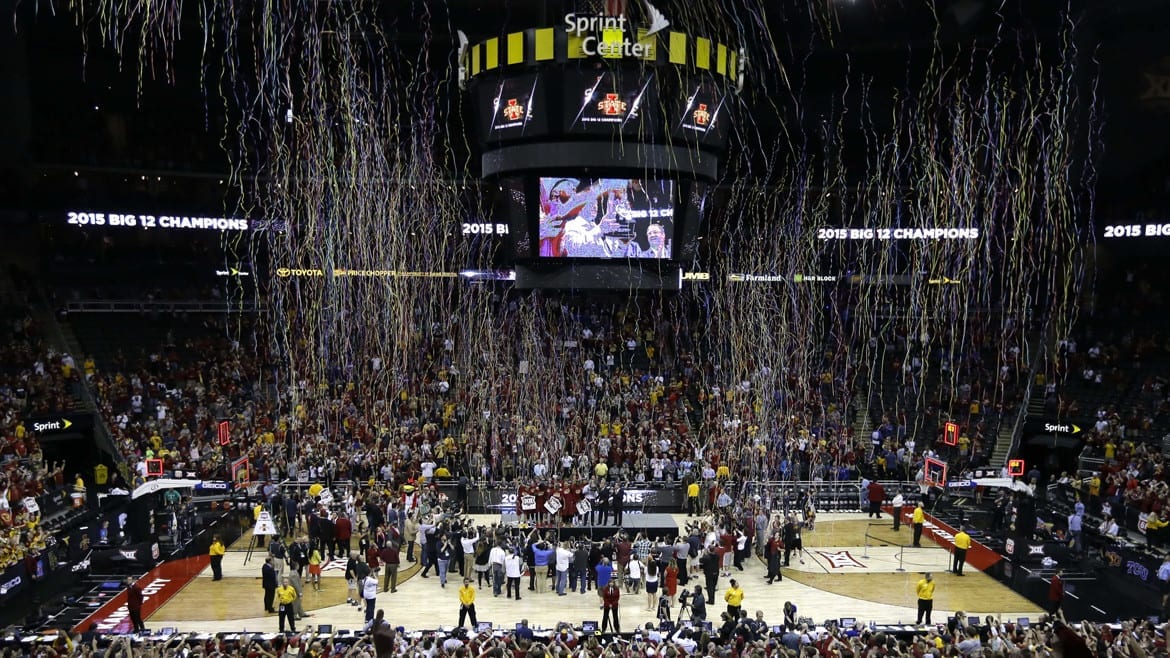 What happened to winter? It barely got cold, we saw almost no snow, and now it seems like spring is almost here. Granted, the lack of a hard winter might mean a particularly nasty allergy season, but it’s nevertheless tough to argue with sunshine and short-sleeve shirts. If you’re ready to get out and enjoy the warm weather, Flatland has the best of culture, high and low.

Let’s start with sports. March Madness might officially start next week, but the madness of March actually begins today with the tip-off of the Big 12 Men’s Basketball Championship. Thousands of tourists are packing our downtown for four days of college hoops at Sprint Center. If your favorite team gets knocked out, or if you just don’t have tickets, you can always watch games on the big screen next door. The Miller Lite Fan Fest is taking over Power & Light.

Basketball isn’t the only game in town. Get out to newly renamed Children’s Mercy Park in KCK and yell your lungs out for MLS soccer. Sporting KC has its home opener against the Vancouver Whitecaps. It’s a night game, so wear your warmest powder blue.

Or wear green. The run-up to St. Patrick’s Day continues in the Northland with the 2016 Snake Saturday Parade. Last year, according to parade estimates, some 125,000 people showed up to see the kid-friendly fun. Kids will also like Peppa Pig’s Big Splash! at The Midland. The live version of the Nick Jr. animated hit show is sure to make any preschooler squeal. See what we did there?

You shouldn’t take kids to grown-up theater. Like the play that’s both opening and closing this weekend at The Metropolitan Theater. Gumbo House, part comedy, part-drama, hearkens back to Hurricane Katrina with a story of love and survival. There’s another “dramedy” showing at the Unicorn. The Whale, about a 600-pound man who tries to reconcile with his sharp-tongued daughter is surely funny, but not for the faint of heart. Do you like Kipling-era intrigue? The KC Rep’s spy drama Roof of the World is still showing on the Copaken Stage. Just take the bus or Uber. With the tourney in town, parking downtown is sure to be tough.

Didn’t get enough car culture at last weekend’s auto show? At the Mecum Auction, you won’t see the new models. You will, however, see classic muscle cars, collector cars with crazy modifications, antique motorcycles, tractors, and a ton of memorabilia and road art for sale to the highest bidder. Even if you don’t want to buy anything, it’s fun to watch the auctions. Just don’t wave to a friend at the wrong time. You might accidentally take home a Rolls-Royce. Again, this event is downtown. Ironically enough for a car show, mass transit might be a good idea.

Hoops fans from Oklahoma, Iowa or Texas, and anyone who likes a bit of twang, will have no trouble getting their fill in our town. Grammy-winning country star Travis Tritt performs at the Ameristar Casino. You can also catch the lanky balladeer Lyle Lovett at the Uptown with Robert Earl Keen opening the show.

Two genre-spanning legends are at the Kauffman Center. Sunday night, soul singer Mavis Staples shares a double bill with the great Nick Lowe for a night of exquisite songcraft. Expect to have your heart broken in the best possible way.

Need something a little more down and dirty? Get a solid blast of guitars, drums and passion at the Granada in Lawrence with Wolfmother. They sound like a mix of AC/DC and Black Sabbath with a dash of Nirvana thrown in. If that’s not dirty enough, spend your weekend at Riot Room. Eliot Sumner, daughter of Gordon, aka, Sting, is performing on Friday night. She plays synthy pop with vocals that sometimes sound like her daddy’s. Riot has another strong bill on Saturday night. Hard-rocking headliner The Noise FM is backed up by Yes You Are and Pink Royal. For yet more pop, this time on the spicy side, Flatland’s best friends in radio are throwing a shindig on Friday night. Get to VooDoo Lounge for 90.9 The Bridge Presents: Maria the Mexican Album Release Party. Soca Jukebox opens.

After all that rock, you might need a dose of something more high-minded. Italians can help. Like Donizetti’s “The Elixir of Love” presented by Lyric Opera. The bel canto has been re-imagined as set in early 20th-century America, but the story of Nemorino and Adina remains the same.

Or go see world-renown pianist Sequeira Costa. In a career that spans seven decades, Costa has performed everywhere from The Vienna Musikverein to Carnegie Hall and the Kennedy Center. On Saturday afternoon, the 80-year-old former KU professor performs Bach, Beethoven and Chopin in Polsky Theatre on the campus of JCCC.

Basketball fans who need to laugh off a loss will find a bunch of great comedy. Kansas City-born and Hollywood-based Tim Gaither is at Standford’s all weekend. Greg Proops, the self-proclaimed Smartest Man in the World, will play the Improv. He’s best know for Buddy Holly specs and wise-cracking appearances on “Whose Line is it Anyway”. Plus, there’s the provocative and political David Cross. Coming off a Mr. Show reboot, Cross brings his sardonically-titled “Making America Great Again!” tour to the Midland. That’s enough to cheer up any fan.