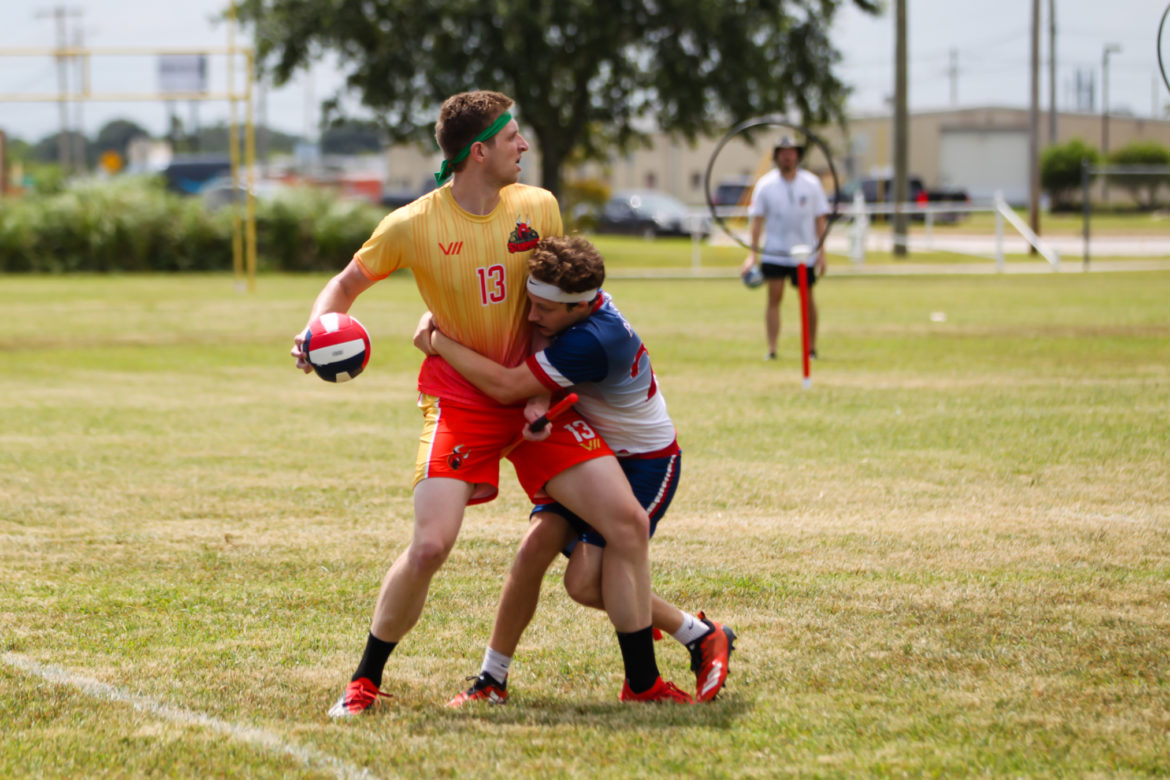 Founded in 2016, the semi-professional club exists on principles of inclusivity and a strong sense of community.

If Harry Potter, Hermione Granger and Ron Weasley happened to watch the Kansas City Stampede play quidditch in the Major League Quidditch Championships in Richmond, Virginia in early August, they may have thought the Muggles have once again gotten it all wrong.

The human version of J.K. Rowling’s game is absent of flying broomsticks, enchanted balls and any off-field implications involving ‘He Who Must Not Be Named.’

In realms of reality, the game of quidditch (made lowercase to separate from Quidditch in the famed series) is a mosh pit of 14 competitors on foot, a multitude of flying familiar-looking balls, and some serious physical contact.

‘Muggle quidditch’ has taken on a life of its own since it was conceived at Middlebury College in Vermont in 2005. It’s now played on campuses, in communities, and countries across the globe. The Major League Quidditch Championships, of which the Stampede were a part, fields 12 teams from the U.S. and Canada.

“It’s kind of a mix between basketball, soccer, hockey, horse riding, and dodgeball,” said Stampede General Manager Damon Penner. “All that mixed into one.”

It’s a full-contact, seven on seven team game, where the main objective is to outscore the opposing team by throwing the quaffle — a volleyball — through a hoop for scores worth 10 points. Or, a team can capture the snitch, a scoring chance worth 45 points. Each team rolls out a trio of chasers, pair of beaters, a keeper, and a seeker, who are distinguished by colored headbands.

Chasers work together to move the quaffle downfield and through the hoops, while keepers operate within the keeper’s box to prevent chasers from running up points. The beaters take aim at chasers, keepers, and seekers with bludgers — or kickballs — in an attempt to temporarily disable an opposing player.

Finally there are the seekers, who take on the sole mission of capturing the snitch. The snitch — or tennis ball — dangles from the neutral ‘snitch runner’s’ rear waistband. It’s the seekers job to swipe the snitch from the runner, who is dressed in all yellow and puts up a pretty physical fight.

It’s a far less magical experience than what’s shown in the movies.

Add a 32- to 42-inch broomstick wedged between each player’s legs for the duration of the match, and you have quidditch.

“Have you ever seen “Cool Runnings?” asked Penner, before providing his analogy. “Remember the scene where Derice walks in with his suit and he asks the sponsors if they want to sponsor the first Jamaican Bobsled Team and they all laugh? That sums up quidditch.”

For Penner, mockery is just a misunderstanding. He’s well aware of the game’s ongoing pursuit of legitimacy, which is perhaps best reflected by the 15-year-old game relying on a twelfth edition of the rulebook.

His Stampede was founded in 2016 based on the strength of quidditch clubs on nearby college campuses, namely the University of Kansas and University of Missouri. The KC quidditch club has since perennially hovered around .500 and qualified for the league’s late-summer championship tournament as a top-three finisher in the South division.

On that inaugural Stampede team was now-head coach and starting chaser Rachel Heald. She describes her sport with a simple message.

“It’s a full-contact mixed-gender sport,” Heald said. “And I think when we use those two phrases together, it’s like — how?”

Heald, who’s played four seasons at KU, three with the Stampede, and in both the quidditch World Cup in Florence, Italy, and the Pan-American Games as a member of the U.S. National Team, says the gameplay is inherently inviting.

“There are a lot of ways to be good at quidditch depending on how you’re athletic, whether it’s speed or size, or you have a really good arm. There are so many aspects and positions in this sport that you can be really good at a certain position,” she said.

What perhaps makes quidditch more unique than its witch and wizardly roots is that inclusivity is written into the game’s code. United States Quidditch, MLQ’s governing body, lists “striving to be a leader in gender inclusivity for all age groups” in its core values. Depending on the phase of the match, a ‘Gender Maximum Rule’ prohibits more than four or five players who identify as the same gender to be in play at once.

Be it the game’s rules, or overarching values, Penner and Heald agree that their sport’s inclusive intentions are a one-of-a-kind strength that pays off both on and off the pitch.

“It makes me want to be more competitive, because you’re not just competing with other women or other non-males in the sport,” Heald said. “You should go out on the pitch and be the best chaser on the pitch, you shouldn’t try to be the best female — and I think that allows you to take that one step up and be competitive in ways that aren’t being more athletic than the other person.”

“I had been pondering the things that hold a society together, cause it to congregate and signify its particular character and knew I needed a sport.”

This summer, the Stampede fielded its roster with a few first-time participants, and took on the MLQ Championships with zero non-male subs — quite a feat, considering what can be lengthy matches in the dredges of Richmond’s summer.

Heald and company exceeded expectations in Richmond, finishing 2-2 on the weekend, boasting wins against Detroit and Minneapolis. Kansas City’s season came to a close just short of the quarterfinals in a loss to Washington.

The Stampede capped the season with a 3-9 record. Heald called her club’s losing record “non-reflective” of the strides the Stampede made this summer, considering its difficulty to field a lengthy roster.

It’s mostly the collision between fantasy and reality. Summer jobs, internships and the struggles of fielding a volunteer team all lead to growing pains for the Stampede.

And they weren’t the only club to face such roadblocks. Last year, the third wave of MLQ expansion teams and entire West division folded for reasons ranging from general lack of interest and long drives for the Guardians out of Los Angeles, to Boise’s mandatory disbandment following a bench-clearing brawl in a series against Salt Lake City.

That being said, MLQ competitors from 15 teams across three divisions have made it work for five years and counting. The dedicated athletes compete June through August, and traveling mostly by car on trips that often eclipse seven or eight hours.

“I think the people and the community make it worth it,” Heald said. “You’re hanging out with these people from across the country before the tournaments. And then everybody on the team is just really great friends. You’re basically just road tripping with your friends on the weekends.”

Going on an adventure with your friends — that’s something Harry Potter would know all about.

Learn more about the Kansas City Stampede on social media:

This article is a part of Flatland’s SportsTown Series: A collection of stories covering the average athletes, niche-sport elites and everyone else dedicated to the games you’ve never heard of, could easily be a part of, and just might want to love that make Kansas City truly a one-of-a-kind sports town.

Built by Croatians, Open to Everybody