A City of Pop-Ups 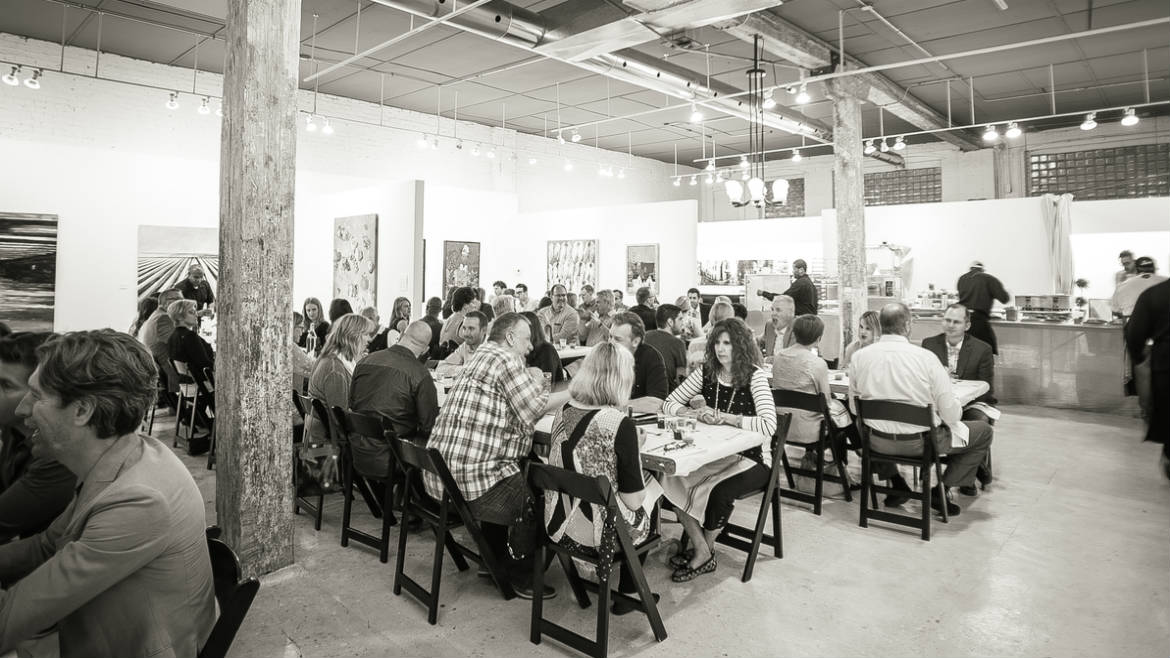 If Joe West was ever going to have his own restaurant, he knew he had to get out of the kitchen.

The chef, formerly of Bluestem and 801 Fish, has spent the past several months cooking his way across the city in a series of pop-up dinners that he hopes leads to a more permanent home.

“When you have a job that’s secure and full-time you get comfortable. I would constantly tell myself that I would eventually own my own restaurant, “ West says. “So I quit my job and put myself in a position where I have to make this work to survive.

This is Kusshi, West’s vision for a counter-top eatery serving small plates in his native Kansas City that is slowly taking form over a host of pop-up dining experiences this summer and fall.

Pop-ups – temporary restaurants often in unconventional spaces, that at times, don’t even have a traditional kitchen – are still a relatively new phenomenon in Kansas City. Chef Joe Shirley has been holding pop-ups since 2012 in advance of his brick-and-mortar restaurant concept, Uberdine, and Amy Marcus of the Grassroots Café wants to start holding pop-ups ahead of launching her paleo and locally-focused eatery in 2016.

Gram & Dun on the Plaza has become a de facto pop-up incubator with their sous chef Rick Mullins (who collaborated with fellow chef Mickey Priolo on a series of pop-ups at Czar Bar and Powell Gardens) and West now working there three days a week. And there’s a new national player with the New Orleans-based Dinner Lab, a membership supper club in 33 cities, which arrived in May.

“With Dinner Lab coming here, it validates the food scene we have in Kansas City,” Jenny Vergara, Feast Magazine’s contributing editor for Kansas City and the founder of Test Kitchen, says.

Vergara remembers what it was like to launch Vagabond, a collection of pop-up dinners with the Local Pig’s Alex Pope, in 2011.

“We realized we needed to push the envelope. This was a chance to take food out of its context and really push it,” Vergara says.

The Vagabond dinners doubled as performance art with the duo hiring a designer to recreate a Moroccan bazaar and transforming City Market into a carnival. Vergara remembers their take on an art show, where diners were seated in the round and found Pope atop a ladder dispensing sauce via a squeeze bottle. While art was part of the experience, the economy was also driving the arrival of pop-ups.

“When the economy was bad, chefs were turning to food trucks and pop-ups, waiting for a restaurant to be funded,” Vergara says. “Today, pop-ups are more a function of a chef wanting you to know who they are and what they cook like so you know them when they launch their Kickstarter.”

West is indeed in the midst of a Kickstarter campaign, but he’s not the only chef that sees a pop-up as a path toward restaurant ownership.

Joe Shirley, who cooked at the Federal Reserve and was the executive chef at the recently shuttered Kansas City Club, has been creating multi-course dinners through unconventional partnerships for the past four years. Shirley has been an innovator – finding ways to use products in every dish in exchange for the use of a given space. Finding a location that is open to hosting a pop-up or has kitchen facilities is one of the biggest challenges faced by would-be pop-up-preneurs. Shirley’s Uberdine is centered on themed dinners, such as the one that used the Roasterie’s products in each of the dishes served in the coffee roaster’s Bean Hangar event space.

“The end goal is the eventual restaurant. It’s the Patrick Ryan business plan where you want to have a line out the door whenever you open the brick and mortar concept,” Shirley says. “But I’m also promoting and marketing myself as I transition to doing that full-time. [Pop-ups] promote the other, more profitable aspects of the business, the catering and in-home dining experiences.”

Beyond helping established chefs fund their own establishment, pop-ups are also introducing Kansas City to chefs that work for more well known culinary names like Ryan.

The club, which has an annual fee of $125, in addition to the cost of each dinner, operates like a moveable restaurant. Dinner Lab scouts locations, sets up the dining room and staff, and utilizes a mobile kitchen to turn spaces like art galleries into eateries for an evening.

“We want to make sure that chefs only have to think about the food,” Farris says. “And the exciting thing from a chef’s perspective is you’re making your own menu.”

The promise of your own menu, even if it’s just for one night, is what drives West and the other chefs pursuing pop-ups.

“Hopefully after a few of these pop-ups I’ll have a menu of complete all-star dishes,” West says. “Then when the time comes to open up the restaurant, I’ll have dishes that people will really enjoy.”

One of the early standouts has been West’s scallops. He uses the abductor muscles, roasting them with onion and garlic and topping them with a foie gras emulsion. A few spoonfuls from the small plate has what he likens to a “surf and turf flair,” with a bit of miso caramel that sinks to the bottom beneath the scallop. With each dinner, West hopes to continue to refine his style and connect with diners in Kansas City.

“It’s been a lot harder than I thought it would be, but it’s been very rewarding,” West says.” I don’t have to go through anyone for permission to cook the food I want to cook.”

curiousKC | Pondering the City Beneath Our Feet

8 Kansas City Chefs Share What Latinidad Means to Them