| Take Note | Take Note: The School of the Future |

Southwest High was Once a Premier School. What Happened?

Parents and district at odds over potential reopening 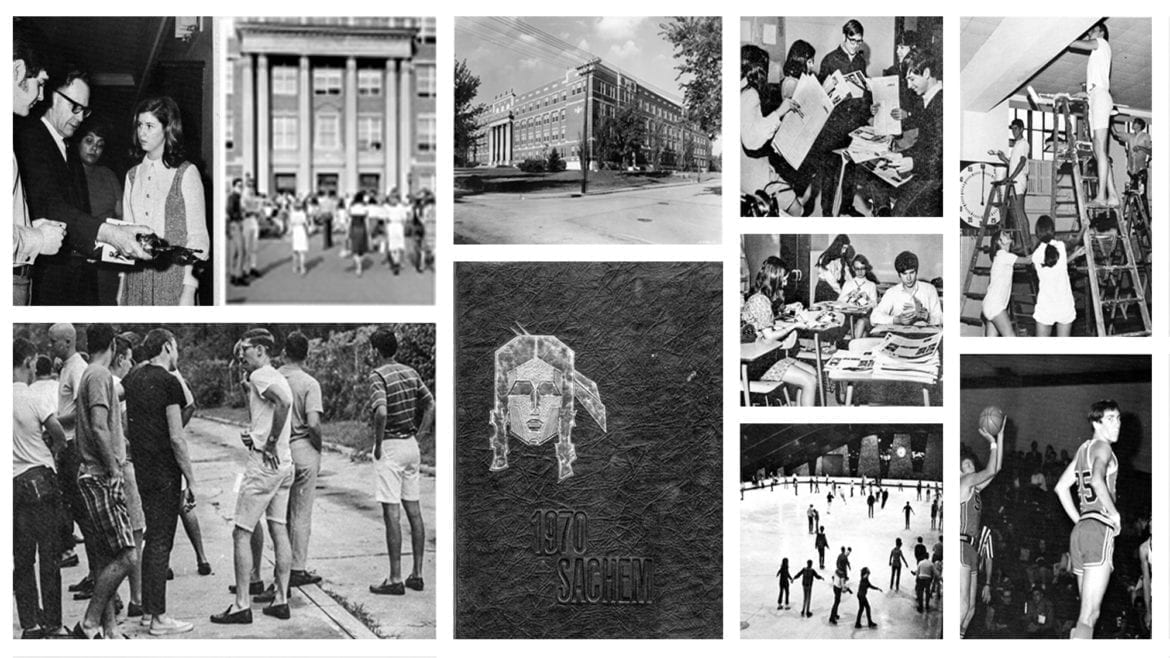 It boasts notable graduates, including acclaimed rapper Tech N9ne, the wealthy founders of H&R Block and celebrated journalist Calvin Trillin. Now Southwest High School is in decay and part of a heated debate about the future of public education in Kansas City.

The building still looks beautiful on the outside. Towering Corinthian columns and a handsome, red-brick facade greet visitors at the school’s main entrance.

Flatland began looking into the historic school after a reader posed this question to curiousKC: “What is the history behind the old Southwest Early College (now temporarily being used by St. Peters)?”

What we found is a complicated past and uncertain future for what was at one time known as Southwest Early College.

The school at 6500 Wornall Road in the Brookside neighborhood first opened its doors in 1927. It last closed in 2016 when Kansas City school officials approved a master plan to readjust district boundaries, the latest in a string of attempted reopenings that has marked the school’s spotted history.

Area parents, alumni and school boosters calling themselves Uniting at Southwest now want to reopen Southwest again, but this time as an independent operation serving grades six through 12. Critics worry that pouring resources into the revitalization of Southwest would needlessly divert cash and energy from other, needier schools in the district.

Kansas City Public Schools superintendent Mark Bedell says there are two concerns with the proposal: a clear financial outline and whether there are enough students. The latter has been a main concern for the district over the past year or so.

⏯“You know, the thing that nobody wants to hear (about) is school closures,” Bedell said. “But when you have enrollment declining, or you don’t necessarily have enough people moving back to the city at a fast rate, you can’t justify running schools that are at 45 percent utilization. It’s not fiscally responsive.”

For decades, Southwest High School was revered as one of the city’s most distinguished public schools. That began to change amid racial tensions during the civil rights movement. In addition to sudden closures of Southwest, the school has faced scandal and a revolving door of principals throughout its history.

Alumni reminisce today on sites like Facebook about the school’s golden years. Some commenters have fond memories; others recall a troubled past. Expressing nostalgia about Southwest is sometimes construed in Kansas City as longing for a time when public schools here were vastly more segregated along racial and economic lines.

“Southwest still sits in one of the finest neighborhoods in the city, where property values consistently outpace most other neighborhoods,” wrote Jay Besheer recently on the Southwest High School – KC ’73 Facebook page. “Hopefully, we have gotten through the ‘white flight’ mentality and can continue on to make Southwest one of the premier high schools in the city again.”

White families began leaving to the suburbs in the 1940s. Then there was a heated teachers strike in the 1970s and a $2 billion desegregation case in the 1980s.

Ugly headlines describing violence and sexual assaults continued into the 2000s, in addition to dipping enrollment and part-time closures.

Christi Higbee-Quesada went to Southwest High School until the end of her sophomore year. Her parents pulled her from the school because of the six-week teacher’s strike in 1974. She thinks that’s why Kansas City Public Schools never recovered.

“That’s why most of us moved over to the Kansas side,” Higbee-Quesada told Flatland. Still, she added: “That building means a lot to many of us.”

Bedell made it clear that the district would not sell the Southwest building. In the meantime, the district rents it out, like it did to St. Peter’s School last year.

Bedell said there are high schools in the district, such as Southeast and Central, with plenty of open seats.

Plus, the promise of charter schools improving the education system has been counterproductive, critics say, because charters have fueled a continuation of racial and economic segregation.

Uniting at Southwest wants to nonetheless reopen a school in the same location. The new Southwest would be a “hybrid” that acts as a traditional neighborhood school but has more control over the curriculum than a district school, according to a letter of interest that Uniting at Southwest wrote to the district.

To ensure the school enrolls students from all socioeconomic and demographic backgrounds, the group plans to advertise the new Southwest to all neighborhoods in the district. It also plans to accept students within the district boundaries. They also propose an off-site program for sixth- through ninth-grade classes to get students talking about race, class and culture.

Their model anticipates helping students with transportation to and from the school, in addition to assistance with getting summer jobs.

The curriculum would employ “project-based learning” — an interactive, STEM-focused concept developed in the 1900s and popularized by High Tech High schools in San Diego. The group’s proposal to the district outlines four pillars: diversity by design, student-centered and project-based learning, autonomy with accountability and interaction with the surrounding community.

“Southwest High School was ranked for many years as one of America’s finest public schools. And it can be again,” Uniting at Southwest wrote in the letter.

The group hopes to reopen in 2020 but faces reluctance from critics.

“Is this going to be a model that could potentially allow for us to offer something that doesn’t currently exist?” Bedell asked. He’s not sure it will.

Alumni and parents know it’s impossible to ignore the area’s history of racial and economic segregation, and they also are aware that enrollment has been shrinking in certain areas of the district for years. Some parents still move to Kansas when their kids become teenagers because they feel that quality options for high school are otherwise scarce.

Advocates argue Uniting at Southwest could help curb that trend. They’re determined to see the school operate differently this time and be representative of Kansas City’s diverse families.

The number of Hispanic and multi-racial families within the Kansas City Public Schools district has been growing in the past two dozen years.

“It’s really hard to take a school that has no diversity and get it to be diverse, I know that.” said Crissy Dastrup, a parent and volunteer for Uniting at Southwest. “This is something that doesn’t happen naturally.”

Supporters say they want classrooms to be a blend of cultures, races and income and truly reflect the world in which students will someday need to live and work.

Some parents, who do agree that diverse classrooms are important, remain skeptical.

Leslie Kohlmeyer, parent and program director of Show Me KC Schools, said there are so many schools in the area, it’s difficult for parents to navigate the system as it is. “What does this school have that others don’t?” she asked about Southwest. Show Me KC Schools is a nonprofit that helps parents compare schools in one place.

“I’m not convinced that opening a new high school, with the goal of being diverse, would improve education here,” Gooden said. “In my view, every time they add another school, it dilutes the resources we have, and we really need to support our (existing) schools.”

More than 80 schools now operate within the Kansas City Public School district’s boundaries, including charters, serving a total student body of approximately 26,500 students. By comparison, according to figures provided by the district, Springfield, Missouri, has 53 schools serving roughly the same number of students.

How does KCPS stack up to other districts?

There are already project-based learning programs in several Kansas City district schools, but no school is fully dedicated to the curriculum. The Southwest High reboot would be the first here.

Today, Uniting at Southwest continues negotiations with the district. Some details in the proposal still need to be ironed out. Bedell said that while he can’t discuss details, the district has asked for a clearer financial outline. Bedell also pointed to the building’s state of disrepair and costly renovations and upgrades that would be necessary.

“We have to be strategic about this,” Bedell said. “It’s very difficult to say we’re going to continuously open up schools, and you don’t really have the resources to really do right by the students you’re serving.”

Editor’s Note: This story has been updated to correct the sequence of events in the history of Southwest High School and provide more links to historical information. “Charter” was also added to the heading of the second chart for clarity.